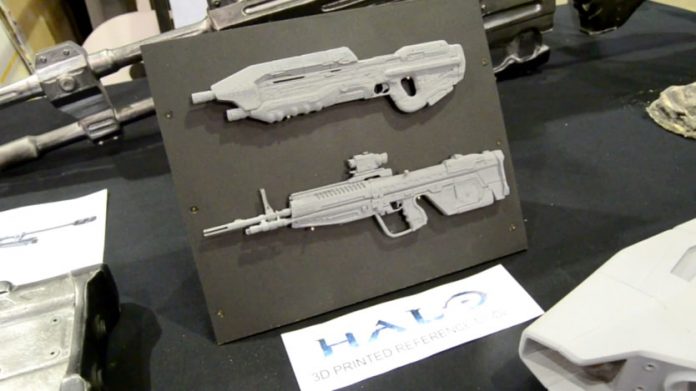 These technologies have the potential for great societal and economic benefit, but at the cost of making governments lose control of arms and ammunition manufacture. As we’ve seen with drugs, failure of a prohibition policy seems to lead to wider and more annoying (to the non-criminal majority) prohibitions.

In addition, traditional manufacturing technology including casting and machining have become more available to the general public recently, due to increased performance, smaller size, and vastly lowered cost of the tools required.

The half-decade since has seen an increase in all these trends. For 3D printers, most of whom are restricted to low-strength plastics like ABS (styrene) and PLA, and the edge cases are 3D printing nylon with fiber reinforcement, being able to print metal has been the Holy Grail, a seemingly unattainable, but highly desirable, object. Our own blog has contained the words “3D” “print” and “metal” in 52 posts in that same period, almost a third of all 3DP references.

So where are we today, in the first quarter of 2017? We can report that the technology to print 3D metal directly and indirectly is still industrial-priced, but it remains the subject of much effort, and the industrial price is a fraction of what it was five years ago. In particular, we’ll look at three ways to print and produce metal parts — one we mentioned before which didn’t pan out, and two new ones, one which has been commercialized and one which is freshly invented.

You can’t win them all, but this was a big disappointment. The idea was simple: new filaments would contain a plastic binding agent as a substrate, and carry a payload of powder metal. The plastic could then be burned out and the net-shape powder metal part sintered to solidity in an industrial oven, Unfortunately, the project appears to have failed.

The sintering part of the process was never in doubt; it’s been used for automotive and firearms parts for a very long time. But if you can’t feed the material to print the parts, you have to fall back on the sort of mold technology that sintering has long relied upon.

But there were technical problems. For example, loading enough metal into the plastic for the sintering to work had a tendency to make the plastic too brittle to be rolled onto a feeder spool. There were also issues with nozzle wear.

The technical problems may have been overcome. It was other business problems, including the anti-business stance of the local community (Sinterhard came from Massachusetts) that appear to have knocked Sinterhard off any probability of early success.

The principals do continue research, they say, but it’s hard to imagine this project succeeding.

We’ve been as remiss in writing about last year’s Mark X as we’ve been in using our original Mark One or upgrading it to the Mark Two. But if the nylon with fiber reinforcement (Kevlar, carbon fiber, fiberglass) of the earlier Marks was something, this year’s Mark X is the defense and aerospace prototyper’s dream machine (<2 min video):

It’s an industrial machine that has industrial costs (budget $100k) and requirements (480v three-phase power; a floor that will support a 2500 lb. machine). But it does produce metal parts… by a sintering process remarkably similar to what Sinterhard tried, and failed, to achieve. The MarkForged process, though, appears to be entirely encased in the machine — not requiring the separate 3D printing and part sintering workflows that Sinterhard envisioned.

The materials currently available and shipping are stainless steel 17-4 and 303; materials in beta test include 6061 and 7075 aluminum, titanium 6-4, and tool steels A2, D2 and M2, and for all you turbine and rocket designers out there, Inconel 625. (Make the GyroJet great again!) 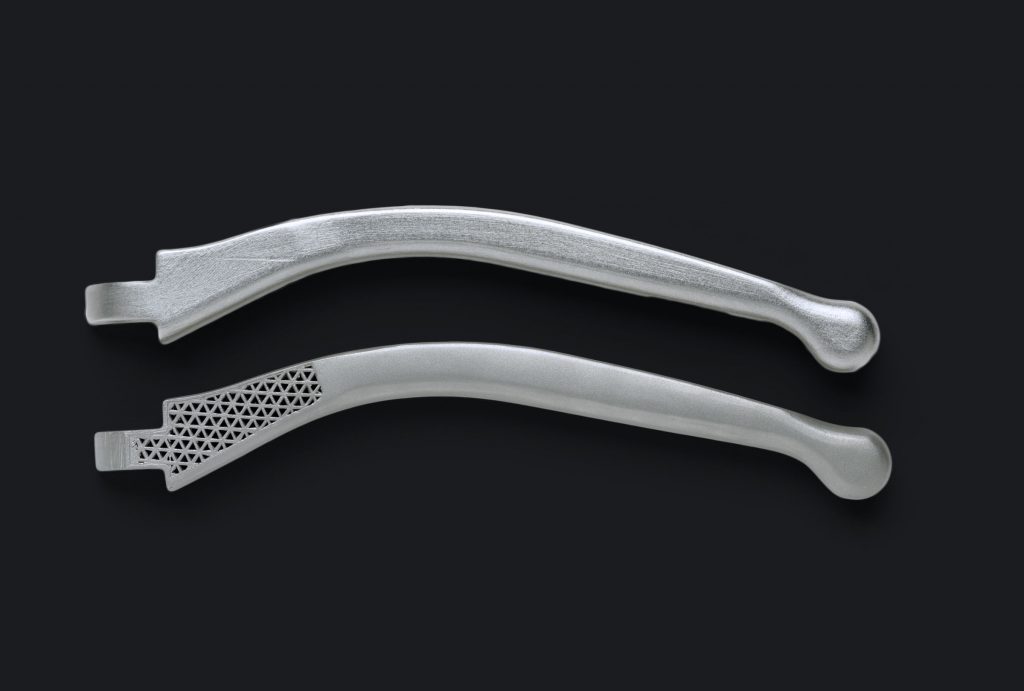 Speed time from design to strong metal parts with this accessible and compact process. ADAM prints your part using a bound metal powder rod that transforms into a dense metal part in one easy step. Bulk sintering provides crystal growth through all axes giving your parts excellent mechanical properties in all directions.

ADAM also enables the creation of unique geometries such as closed-cell honeycomb infill. Parts can be printed like the structure of bones – a closed cell inner core encased in a solid outer shell. This geometry is not possible using traditional subtractive manufacturing processes or DMLS.

The brake handle above illustrates (top complete, bottom cutaway) this type of construction which is, as they say, not possible to make using milling or powder-based Laser Sintering processes.

Vader Systems is not named after the fictional character, but after the principals of the company, inventor Zachary Vader and his father Scott Vader. They have invented an entirely novel 3D metal process that is best suited (at present) for aluminum alloys and others that liquefy in a similar temperature range. A magnetic field is used to deposit droplets of the molten metal, where it bonds to the adjacent droplets to make a solid part.

Here’s the how it works:

And here’s an overview of the advantages of this system, with Zach and Scott explaining the particular advantages of their system over other metal additive technologies.

It can be fast: this video shows the manufacture of a small cylinder in real time (with, later, an inset of the droplet production shot with a high-speed camera). The part is only near net shape, but it’s sufficiently solid to be brought to final net shape with traditional subtractive methods. Of course, just as the resolution of inkjet 2-D printers improved rapidly, the same process is likely to take place with metal 3-D printing, bringing the manufactured part closer to the golden ideal of print-to-true-net-shape.

Vader is finalizing the design of a printer which is planned to ship in 2018  — it will not be consumer priced, though (probably $250,000), and is a forerunner for future systems that would use a gang or array of nozzles to produce much higher metal throughput.

It’s only fair to mention that Australia’s Aurora Labs claims to be shipping their S-Titanium Pro, a multimode printer that sells for $50k (FOB Down Under, net of GST), runs on open-source software, and can reportedly use a wide range of powdered metals. The company website is a bit confusing but a .pdf brochure is somewhat clearer as to what Aurora offers.