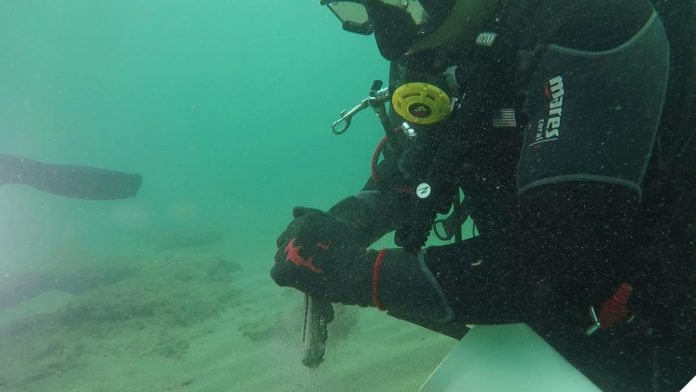 A group of divers poking around a Florida pier found a pre-owned Beretta pistol with some finish issues along the ocean floor.

About 25-feet off Anglin Pier in Lauderdale-By-The-Sea, a group from a local charter service, The Beach Diver, came across the gun while reportedly diving for invasive lionfish in the area. In the short video, above, one of the divers can be seen unsuccessfully working the slide on the recovered semi-auto.

“The chamber was blocked by sand so you couldn’t tell [if it was loaded],” Beach Diver owner Tom Carpenter told local media. “We didn’t want to disturb the gun too much in case [law enforcement] wanted to check it out.”

The gun, reportedly a Model 92, was missing its magazine. Carpenter said that ironically the diver that found it happened to be a Miami-Dade police detective and they called the Broward Sheriff’s Office who sent a deputy to pick up the gun.

In semi-related news, some divers in Florida regularly hunt lionfish with specially outfitted Glocks, fitted with underwater “suppressors,” a story Guns.com has reported on in the past.