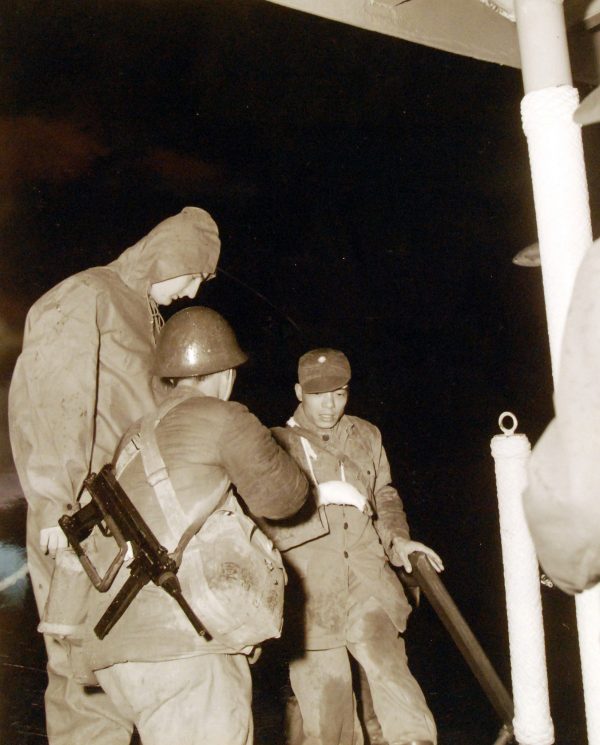 One of the simplest of post-World War II sub guns, the Madsen M50 proved popular enough to give both James Bond and Capt. Kirk heartburn. Larry Vickers with Vickers Tactical lights up one of these Cold War classics in the above short.

Made by the Dansk Industri Syndikat, a Danish company best known for its Madsen-branded firearms, the M50 is a blowback action 9mm full-auto-only that is constructed from two pieces of stamped metal that clamshell together. Firing from an open bolt, the 7-pound Copenhagen-born SMG fires at a sedate 550 rounds per minute as long as the 32-round stick mag holds out.

Sold extensively throughout Latin America and Asia, the guns popped up in coups and conflicts througout the latter half of the 20th Century.

Evacuation of Chinese from Tachen Island to Taiwan by the U.S. Navy, March 1955. Note the Madsen with its wire stock folded (Photo: National Archives #80-G-658097)

The compact (and cheap) Danish burp gun was also super common in Hollywood throughout the 1960s and 70s, appearing in dozens of films, television series

Speaking of spyfilms, Jill St. John, as Bond girl Tiffany Case, grabs an M50 in 1971’s Diamonds are Forever opposite Sean Connery. She was able to score one from a bungling henchman.

The “Soviet paratroopers” that drop in on Rock Hudson at Ice Station Zebra? Yup, armed with Madsen M50s by the caseload.

The gun also made an appearance in Star Trek, Beneath the Planet of the Apes, The Godfather franchise and the original 1960s Misson Impossible, among others.

As a company, Madsen went out of the gun business decades ago but DISA is still around today. Transferable M50s run in the $15,000 range, evil henchmen not included.