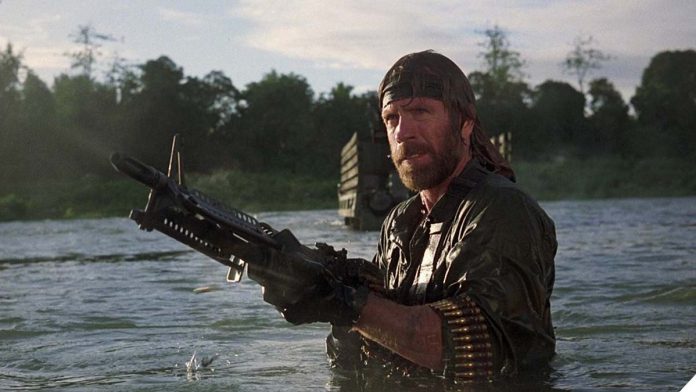 With the news that Glock and gun culture icon Chuck Norris have teamed up this week, you knew this was coming.

Norris, born in Ryan, Oklahoma, was a military veteran, serving with the Air Force Security Police in the 1950s and 60s where he first picked up martial arts — and his “Chuck” nickname — while based in South Korea. Since then, of course, he has founded his own martial arts school, starred in dozens of films and television shows, advocated for Second Amendment rights, and continued to support those in uniform through USO tours overseas.

He has also handled lots of hardware in the meantime. Take Lone Wolf McQuade, for instance. In that movie, his use of a MAC-10 was a religious experience.

He also proved capable of dodging a MAC-10 wielded by David “Kill Bill” Carradine in the final scene, proving that in the contest between SMG and grenade, frag wins every time.

As a bonus, the movie contains an epic scene in which Chuck uses a Dodge Ram Charger to literally return from the grave, fueled by a pop top can of Schlitz

He followed up McQuade with his role as Col. James Braddock in the Missing in Action franchise, and possibly the best M60 scene ever created.

In the follow-on Missing In Action 2: The Beginning, Chuck got his hands on a UZI, which likely whet his appetite for the gun, as he famously carried glistening Micro-UZIs in Invasion USA, using them to good effect in setting a trap for Russkis.

Plus an awesomely large double-shot grenade launcher, way bigger than any M203, attached to an M16. Did we mention it was a double-shot?

He also rocked UZIs in Delta Force I & II as well as an assortment of other steel to include bazookas, M16s, and various pistols. Besides, that movie had dirt bikes that fired rockets and dune buggies with machine guns.

In all honesty, though, Norris is a class act in real life. Check out the below interview where he talks about Democrats, Presidents, the origin of his nickname, impromptu helicopter flights and other bits of true-life trivia.

And of course, Glock has a select-fire model, the G18, which we think on a long enough timeline Mr. Norris should get to handle on-screen.