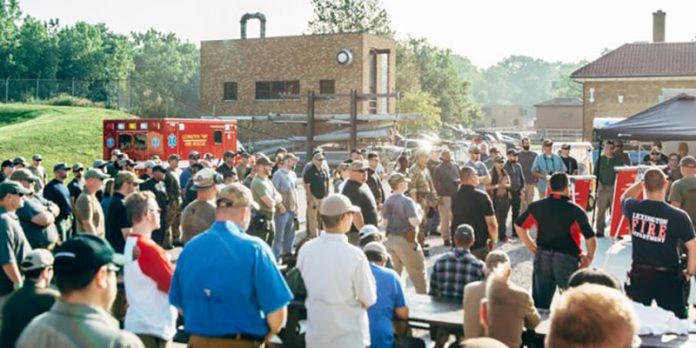 Pat Roger’s is one of those men who exemplified what America is about. Even if you have not trained with Pat, chances are that you have been influenced by his techniques at some point. His work with Gunsite has become the foundation used by most modern trainers.

On May 4th, 2016 Pat left this world to join the warriors he trained. Like his brothers and sisters before he fought alongside going back to 1963 as a Marine right through the week before his death. Few people will ever leave their mark on our Community that Pat did.

To celebrate his life rather than mourn his passing EAG, The FOP of Ohio, the Alliance Police Range and countless other trainers and companies gathered together for a day of shooting and training followed by a day of celebration.

To give you an idea of how involved this event was here is just some of the instructors listed on the event.

EAG now headed by John Chapman (Chappy) and John Spears with the help of John Weyer of Alliance were instrumental in developing the juggling act required to simultaneously run 2-3 events per time slot as well as secure the funding and support of numerous industry companies.

Here are just a few of the great companies who made this event possible.

Special thanks must also be given to Joe Weyer of The Alliance Police Training Division and his entire SRT team for their weeks of work leading up to the event and his unimaginable patience in dealing with the amount of involved in shuttling people, managing vendors, classes and more to make this event appear to go seamlessly.

The training day kicked off early with students arriving as early as 7am to check in and get set for the safety brief. From there, students could break off into groups for the various training and seminars or congregate and chat with like minded individuals.

The day continued without a hitch as instructors rotated through the various ranges to offer instruction to those who attended. For me personally, the best part of the event was seeing so many people from as far as Alaska to Florida gather together and discuss the effect Pat Rogers had on their lives. Getting a chance to talk with top-tier Police and Military trained personnel as well as responsible CPL holders who trained with Pat and Company CEO’s like Ashley of Blue Force or Michael of Raven Concealment as well as really well-informed product experts like John and Cameron at Aimpoint was such a unique opportunity.

With night courses classes that went well into the evening covering the area in gun smoke and the smell of powder the entire range smelled like a manly candle. With these late night activities, the BBQ and raffle were held starting at 1300 on Sunday giving us all time to recoup.

The BBQ on Sunday was just incredible. From the bourbon being shared to the incredible smoked meats. Blue Force Gear who has been a huge part of the growth of the Alliance Range unveiled their new classroom and dedicated it with a bronze plaque commemorating Pat.

Following the lunch, the door prizes, raffle, and charity auction was held. Thousands of dollars in products were donated by the previously listed sponsors and more. Those donations resulted in over $15,000 being donated to Pat’s favorite industry specific charities.

John Spears who has taken over Pat’s training company EAG in partnership with Chappy shared with the group some of the amazing highlight’s of Pats life that reminded us all of not just how important Pat was to us but how big of a part he played in events behind the scenes.

At the end of the speeches and as the day came to a close we received the news we had all been waiting for. Chappy announced to much applause that this even would be the first in a series of annual events held in Pat’s honor.

If you were at the event I hope we had a chance to talk. If not I will see you next year. If you did not make the even this year be sure to put it on your calendar for next year. We thank all those who volunteered time or money to make this event a success and look forward to seeing you all again soon.