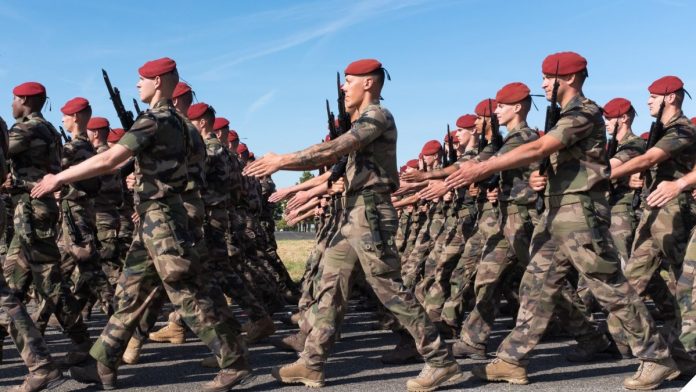 The French military over the past several years has been modernizing from FAMAS bullpup rifles to HK416s, and now will receive Glock G17 Gen 5 MOS pistols and FN SCAR H PR sniper rifles as well. (Photo: French Army)

News from Paris is that the French armed forces will be investing millions of Euros in new Glock pistols and FN rifles.

The French Direction générale de l’armement (Directorate General of Armaments), on Monday, detailed two big contracts for new firearms, the largest of which is for 74,596 semi-automatic pistols to Glock for €44 million. Defense Minister Florence Parly explained the new handguns will go to replace pistols that in some cases date back to the 1950s.

The French military currently uses Châtellerault-made MAC50 pistols and a version of the Beretta 92F, the Saint-Etienne-produced PAMAS G1.

The French Army will receive 80 percent of the new handguns while the Navy and Air Force will largely split the balance. In addition to the Glocks, which began delivery late last year and will proceed through 2022, the DGA announced that some 51 million rounds of 9mm ammunition will be acquired from Czech ammo giant Sellier & Belliot along with UTM training kits from the U.S.

A quantity of 7,000 suppressors will be acquired as well.

While the Glock model selected was not detailed by DGA, French language gun magazine Retex described the new pistol as a G17 Gen 5 MOS with a threaded barrel, suppressor height night sights and a two-tone layout with a Coyote frame under a black top half. Glock 17s are also used by the French national counter-terror team, GIGN, and other units.

The announcement comes just a few weeks after NATO ally Portugal announced they were ditching their long-serving Walther P-38s for an all-Coyote Glock G17 Gen5. The Glock stands tall among Western European militaries, being the choice of the UK, Holland, Poland, Norway, Finland, Sweden, and others. Notably, the armies of Germany, Italy, and Belgium use handguns produced domestically in those countries from HK, Beretta, and FN, respectively.

The MAS36-based FR F2 is to be replaced by the more modern FN SCAR-H PR (Photo: French Army)

The DGA also made it official that a new variant of FN’s SCAR-H, dubbed the SCAR-H PR with the “PR” standing for Precision Rifle, was selected to replace France’s vintage FR-F2 bolt-action rifle. The Saint-Etienne-produced FR-F2, which has been the country’s standard sniper rifle since the 1980s, is based on the WWII-era MAS-36 platform with a 10-round magazine.

While the SCAR-H PR is chambered in the same 7.62 NATO round, the standard magazine capacity on the select-fire FN is 20. Differing from the regular production SCAR-H, the SCAR H PR has a slightly longer barrel, with an overall length listed as 40.16-inches over the standard 16-inch barreled SCAR 17’s 38.5-inches. Said length is also just shorter than that of the SCAR MK 20 SSR/20S.

Photos released by the DGA show the SCAR-H PR with an unidentified optic. A release says that Germany’s Telefunken-Racoms and Belgium’s OIP will supply a mix of IL and IR optics for the new rifle, which will also be equipped with suppressors.

Some 2,620 FN SCAR-H PRs will be ordered with deliveries beginning this year and is expected to complete by 2022. Additionally, French military contractor TR Equipement has detailed that Paris has ordered small quantities of FN’s very sweet compact 5.56 NATO SCAR SC as well.

In addition to their NATO, EU and UN commitments, the French military is deeply involved in fighting Islamic terror groups in Africa, where over 4,500 troops are currently deployed.