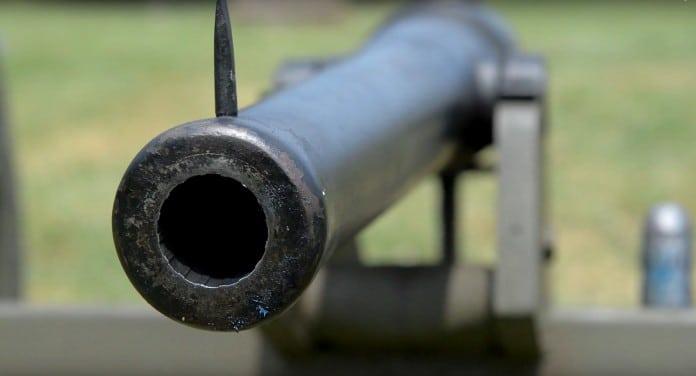 That oh-so-lovable faux comrade, FPS Russia, was able to arrange a loan of a 37mm Parrott Rifle and goes to work on a brick wall, propane tanks, 50 spray paint cans and a trio of wayward toilets.

The Parrott rifle, picking up its name from inventor Captain Robert Parker Parrott who as far as we know had nothing to do with brightly colored birds from South America, was a staple in artillery design from the 1830s through the Civil War. The most common variants, 10 and 20 pounders, were known as such by the weight of their shells, although some huge 300-pounder Parrotts were produced.

The gun FPS Russia has is a half-sized scaled down version of the M1863 Parrott, which had a 3-inch bore. While its not as useful in stopping charges across Civil War battlefields, it sure can bust up a flaming commode or three.