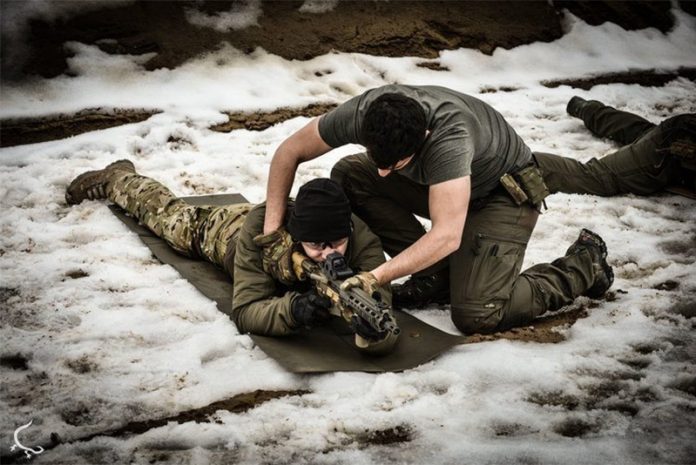 Back when i was in the Israeli Defence Forces (IDF) Special Forces (SF) we always had issues when it came down to proper force on force training. The issues were normally oriented around budget and tools, but before we will get into it let me start this article with a clear statement – Unlike many others, I am not writing this article to feel better, nor to find an excuse to justify folks with SEAL patches or Crye precision goodies with a beer in their hands. No. I am writing this article as an instructor who is interested in human behavior and its effect on my students. Also keep in mind that this article context is within the use of Airsoft in CQB trainings and settings (10m below).

Airsoft is a toy like platform that either is powered with an electronic or gas mechanism. Honestly, I got no idea how it works or what airsoft gun was used to find Bin Laden. What I do know is how much potential those airsoft variants have. In this article, I am going to describe what the benefits are in my opinion.

“Wisdom is nothing more than healed pain.” –Robert Gary Lee

There are dozens of systems on the market that are available for trainings for the purpose of Force on Force. Some of those platforms, such as MILES or other great inventions are optic based solutions which collect normally virtual data (lasers, zone, distance, etc.). In addition to that, training solutions like FX, UTM, Paintball or Airsoft are more mechanical, immediate tools that integrates more rewarding aspects such as recoil, indication of hit zone (made by projectile), weapon operation (in some gas blow back variations you have an identical bolt mechanism), but above all that, those platforms deliver the ultimate learning stimulus – Pain.

Pain as been that personal guidance that brought the human race to where it is today – the most innovative, powerful and adaptive specie on this planet.  If we look at it from an historical point of view, humans are inferior in design. In the old days when we felt the cold of the coming winter, we developed clothes and prepared our food based on painful experiences from the year prior. We felt the pain of the solid earth and designed 40.000 years ago what we call today shoes.

From personal experience, the majority of students (whether experienced or not) will understand the fine fundamentals of each topic they learn by the application of punishment or reward. In other words, when I teach students how to, let´s say, slice the pie correctly in CQB, they would understand the bigger picture aka the concept, but they will often disregard or dismiss important fine details such as how to hold the gun correctly in CQB, to avoid different types of exposures that normally form in my experience that leads to devastating results.

The majority of students will correctly understand 90% of their false or slightly incorrect perceived information about, let’s say a certain tactic or movement, only when they will receive physical feedback. A great example for a physical feedback in this case would be a simulated ‘threat’ with an airsoft gun, shooting the individual who exposes himself before he successfully ‘’slices’’ the room from the outside. Since the human behavior isn’t really comfortable with this uncomfortable feeling, the individual will adapt and change or recalculate what he learned into over calming this new feedback – pain.

Eli demonstrates to the students the reality of kneeling in close proximities – Something many people are not aware of when shooting against paper targets.

Airsoft guns do just that. And they are an extreme low cost in comparison to FX or other tools. While the sound of most airsoft guns perhaps not necessarily mimics the sound of a real gun, it does – unlike other tools – triggers that fear of pain.

If paper targets are the mirror of skills then human targets are battle scars of skills…and scars don’t heal. 90% of the training I got to witness throughout my career as a student / instructor were done in shooting ranges and around paper targets. This is one of those unconscious sins that many instructors get away with. The problem with paper targets is that they reflect linear excellence rather than reality based unbiased feedback.  Now it is true we cannot shoot humans or cows on the shooting range, but the importance of a repeating force on force training should be existent in any training you probably asking why, so let me help you.

When it comes down to training, i want to have authentic training data rather than controlled one. Let me repeat it in civilian language – I would like to receive feedback that was not influenced by any foreign interests. Instead, I would be more interested in raw, hard and authentic feedback that will point out viciously at where are my men’s weaknesses.

With that being said a true & solid training feedback (and often success) is normally generated by how the target is interacting or evolving in according to the user XYZ decisions whether it is tactics or movement. Force on Force allows us to witness reaction times, human behavior, decisions, orientation phases and much more. It is training through authenticity.

This is basically why Force on Force is more critical and way more important than the shooting range, especially when it comes down to CQB contextual training’s. The Shooting range is merely a mechanical laboratory for specific skill sets which are constructed in theatrical mechanism while Force on Force is the live experiment with uncontrolled results.

TIP: Paper targets are like empty cars. Put a driver into it, and it is faster and unpredictable.

If you would go every day to your local shooting range, say over a course of 1 month, you’d be shocked how rarely you would see the same faces again (applies to all backgrounds). Truth has to be spoken – even in countries or states like Texas, where gun laws are quite ok, the majority of people have no time, will nor money to go to the range regularly.  That’s where the Airsoft stretches its relevance beyond most tools in the spectrum of training. See, the majority of Airsoft weapons, especially Gas Blow Back variations, have a very close to reality weight and mechanism.  From manipulation drills, to interface interaction with the bolt catch (that gives same training feedback as it would be a real one), or a simple focal vision training with pistols that simulates a fairly nearly similar pivot effect that a standard pistol has, you have the very unique possibility to train for perfection and fill up that ‘repetitions log’ on each of your motoric skills before you actually hit the range! It was not so long ago, that such capability was quite rare and unreachable even for service men.

While many people like to dismiss Airsoft guns as a tool for wannabes (a statement well deserved) you would be amazed how many units or organizations are recognizing the benefits of using Airsoft guns. Its maintenance, accessory flexibility or projectile cost vs effectiveness is outstanding in terms of costs & logistics. For the majority of people who does not need to calculate the cost of logistics it might not mean a lot, but the price of $1.00 ($2.00 in some cases) per FX bullet is one (in the line of many others) reasons as of why many officers & soldiers receive less and less hours on practical Force on Force training and just get fed up with dry Power Point presentations. And as mentioned above, Force on Force is probably the ultimate summary type of training.

While Milsim is honestly another word for beer or wearing insignias that were never earned, I like to use the word Excellency to describe people who are engaged in Airsoft based training, rather than all of these pretending to be Special Forces or astronauts.

Ever since I got out of the military and started to do tactical coursesoverseas, I came across a wide spectrum of individuals. Some of them were active LEAF, some were not.  Some were Government – and some were civilians. But what was similar to those different colors and shapes of people was their desire to excel, to perform, to become a better team player, a great first responder, a better shooter, a better thinker. I always thought that those types were not so common at first, but the more my journey continued across different countries the more I started to recognize, those types of people were actually existing, but in the shadows.  Some good examples for you to look at would probably be Robo Murray, Kireru Airsoft, Alex Smith of CAG, Stirling AS UK and many others you probably never heard off. Those are individuals who strive to excel and achieve by training and setting an example.

Why do I tell you this?

Putting all those nonsense games and BS culture aside, those Airsoft guns are merely a tool. But that tool gives you an option to turn your average time in the range or in the patrol car into a lifestyle of training. Become proficient in first aid and medical applications. Become effective and careful with firearms. Or become a better civilian who can cooperate and understand emergency services in edge scenarios, become a useful person to society that sees those in need.

And a small tip to the ‘average joe’– regardless of your background and level of achievement, do not forget your origins and level of training. Be true to yourself and earn your status. Know that you are still learning, and master of nothing – like the rest of us all.

They offer a wide spectrum of programs that take place in one day classes, three-days-seminars, and events up to one week. All those programs are based and created on their knowledge which they unpack and repack in a way that will suit every participant. For Gecko the gear is just a tool and the will is the key. Gecko believes that every person who has the will, will find his place in their seminars and workshops.

The instructors behind Project Gecko are all former military personal with extended training’s and combat experience. Eliran founder of Project Gecko  was born in Israel. Before he moved to Germany he served in the IDF in one of the SF units.

Find out more about Project Gecko