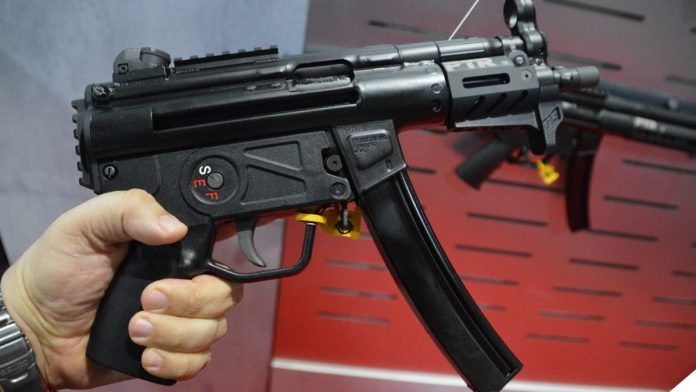 The PTR 9KT, a semi-auto send-up of the HK MP5K. What’s not to love? (Photo: Chris Eger/Guns.com)

The Heckler & Koch MP5 is a thing of enduring beauty but their rarity on the consumer market has left a void quickly filled by dozens of clones.

Developed in the 1960s as HKs Maschinenpistole 5 by a team led by Tilo Möller, the team essentially started with the company’s proven G3 battle rifle and, in many ways, just downsized the 9-pound 7.62x51mm weapon to a much smaller 5.5-pound, creating a 9x19mm chambered squirt gun.

Both guns share the same basic roller-delayed blowback action. The roller lock design, invented by Dr. Werner Gruner and used in WWII on the very successful MG42 machine gun, creates a durable and effective lock-up that is as efficient as it is reliable. The blowback action fundamentally treats the cartridge case itself like a piston to work the closed bolt, with the gas of the recoil being transferred through a fluted chamber.

Although a few pre-1986 transferrable select-fire MP5s are floating around, and others are hopefully headed to the market as LE teams are increasingly replacing their HK room brooms with M4-ish guns, their cost is upwards of $25K — not including stamps. Semi-auto variants produced by the German gunmaker — the SP89, and the SP5 — are more affordable but almost as rarely encountered at affordable prices. This opens the field for clones.

South Carolina-based PTR has continued to expand their MP5-style offerings in recent years by introducing the very handy 9KT earlier this year.

The American-manufactured semi-auto pistol is an NFA-compliant version of the classic HK MP5K (Kurz = short), a storied SMG that was a favorite of various international balaclava-clad SF types in the Tom Clancy-era. Announced just prior to SHOT Show 2019, the 9KT runs just 13.38-inches overall, largely due to the 5.16-inch, three-lug barrel.

The company splashed into the MP5 clone market in 2018 with the 9C series pistol and 9R series rifle.

The 9C sports an M-LOK compatible aluminum handguard and 8.86-inch 3-lug barrel with push-button and paddle-style magazine release while the rifle has a stock and a 16.2-inch barrel. (Photo: Chris Eger/Guns.com)

Located in Virginia, Zenith Firearms imports a wide array of roller-locked designs produced in Turkey by MKE-K, a company set up in cooperation with HK decades ago to make such guns for the Turkish military. One of their cooler new offerings is the Z-5RS, a braced pistol with an 8.9-inch barrel and a classic style forearm and the Z-5RS SBM4 which sports a Picatinny rail and slimline forearm.

Our very own Chase Welch recently reviewed another one of Zenith’s pistols, the Z-5P.

Besides PTR and Zenith, who account for a huge market share when it comes to MP5 clones, there are a host of smaller shops that specialize in the platform. These include Pennsylvania’s Black Ops Defense, Brethren Arms in Utah, Dakota Tactical in Michigan, and TPM Outfitters in the Lone Star State. Like the MKE-K guns brought in by Zenith, the Pakistani Ordnance Factory (POF) ships semi-auto MP5ish clones to the states which are brought in by several importers. Finally, Palmetto State Armory has been promising their own domestically made model for the past couple years, so that is on the horizon.

And of course, HK still makes them for the LE and military market, the restriction in place due to the Hughes Amendment. In short, the platform that its original maker describes as “the most popular series of submachine guns in the world,” has a lot of life left in it.