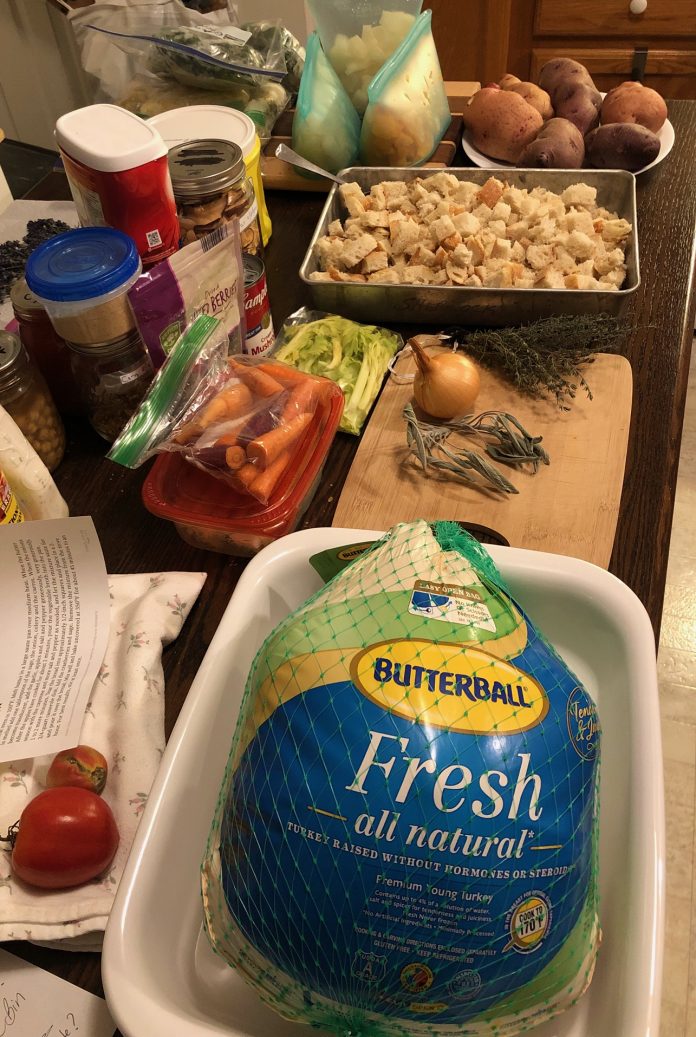 I know that the holiday is over, but just consider this a Thanksgiving After Action Report.

It is difficult to try to put into words the satisfaction that I felt when serving Thanksgiving dinner that consisted in large majority of food I grew with my own two hands.  Marie Kondo ain’t got nothing on me when it comes to finding things that “spark joy”.

This was my reward for the work put into my yardstead/foodscape and Pandemic Garden 2.0 this year. I did not get to feed my family last year and spent the holiday by myself learning how to pressure can turkey. So this year’s Thanksgiving was the big payback.

Yes we are still in a pandemic by the way, and (big surprise) there’s apparently another variant in the wings. Add to that our inflationary economy and projected shortages (LGB), and we have even more incentive for you to get started on your own garden and foodscape if you haven’t already.

But first let me humble brag for a few paragraphs about the meal(s) I was able to serve my family from my homegrown foods.

Since two members of the family are vegetarian, I tried to have some options where meat was not the main attraction. So Wednesday night when all the adult children had gathered I offered pasta night – with meatballs served separately – on the stove top “buffet”.

Admittedly the meatballs were not my own. I still have a single frozen pound of venison burger left, but I am hoarding that until the end of this year’s deer season.

The pasta was from my pandemic stash. My son laughed and said “same” when I mentioned the whole case of rotini I had ordered from Amazon in March 2020, not knowing how things were going to play out. But even when it’s not a national emergency, having extra food on the basement shelves means you don’t have to make a frenzied extra grocery run when the offspring return home hungry.

The salad featured carrots from my own garden, and peppers from the last garden harvest before the frost. There was also a single fresh tomato that I picked green a couple weeks ago when frost was looming. Since I don’t have a greenhouse or cold frame (yet), the lettuce was store bought.

The pasta sauce however, was entirely my own. Three pints of home-grown, home-canned pasta sauce came from untold pounds of home-grown tomatoes started from seed in toilet paper tubes in my kitchen window. From start to finish it was entirely of my own creation (well, myself and the Almighty and Mother Nature). It was an incredible feeling of accomplishment. And that was from last year’s stash. There are several pints of sauce still in the pantry, and then I have this year’s stash yet to break into.

For breakfast noshing on “The Day”, we had pumpkin muffins made with my homegrown pumpkin, and zucchini bread made with my garden zucchini. The eggs were store bought. My HOA does not allow livestock of any variety, though I’ve occasionally wondered whether I could get away with a couple very quiet rabbits. Even so, it’s not like rabbits really lay Cadbury eggs.

The Main Meal on Thanksgiving

Okay, here is where my self-satisfaction reached an alarming and disgusting level. I nearly dislocated my shoulder patting my own self on the back.

The turkey was store bought. Although I saw lots of wild turkeys on my game cams, the wily galliformes only showed up when I was at home doing other things. So 12-pound Butterball it was. I also bought a 20-pounder at a loss-leader 59 cents a pound, but that will stay frozen for canning in January.

My garden butternut squash was not as prolific this year as last year, so to the two small ones I had,  I added a pattypan squash that came from a coworker’s garden. That was all cubed, tossed in a mix of olive oil and maple syrup, and roasted in the oven.

Then there was the garden corn. I had blanched and frozen the cut corn in late summer, so all I had to do was defrost and nuke it, allowing folks to butter and season to taste at the table.

Remember the container potato experiment where I grew two varieties of potatoes in a laundry basket and milk crates lined with hole-punched garbage bags? Those taters were the next installment in Thanksgiving dinner. I cubed them, tossed them in olive oil with various herbs and salt and pepper and roasted those in the oven too.

With that potato recipe I was trying to save the lactose sensitive in the family from too much in the cheese and cream sauce department, plus I figured if there were any leftovers we could fry them up with the eggs for breakfast.

Next in the line-up was green bean casserole, starring (you guessed it) my garden green beans. And yes, even the lactase-deficient members of the family specifically asked for traditional green bean casserole. Even so, I did substitute some veggie broth and oat milk for some of the added milk in the recipe just to see if it would work (it did).

In years past I have usually punted in the stuffing department and just done a boxed version because it was one less thing I needed to pre-prep. But this year, needing a truly vegetarian version (no meat broth), I searched the internet for a scratch oven stuffing recipe and hit the proverbial jackpot. I’m linking it here because it was fantastic and I think this will be my new traditional recipe.

This recipe was totally worth the prep time and it allowed me to use my garden grown sage and my dehydrated apples. If the serviceberry bushes I planted this past spring really get going, I’m hoping to have my own dehydrated berries to add next year as well.

In addition to the above we also had two kinds of home-canned applesauce – from the apples on my yard tree. (I canned 34 pints of applesauce this year) One was plain applesauce sweetened with maple syrup, and the other was strawberry applesauce. By the last batch of sauce this fall I was truly appled-out. I found a big bag of frozen strawberries in the chest freezer and decided to go wild with that last batch.

It turned out really well and gave me high hopes for the strawberry plants I put in containers this summer. I got a small handful of berries for the first year, but maybe next year I can have entirely homegrown strawberry applesauce too!

Suppers the next couple days will consists of leftovers because mom is tired of cooking for a bit. But as a back-up plan I’m going to make Three Sisters Casserole with my black beans, pumpkin, corn, and my home-canned salsa (with cornmeal from the few stunted ears that I let dry out on the stalk instead of harvesting). That should serve the dual purpose of trying out that recipe but also being a vegetarian dish for the non-meat people in the family. I’m looking forward to trying it out.

In total for the whole visit my family consumed this list of my homegrown pandemic garden produce:

Pumpkin, zucchini, tomatoes, butternut squash, corn, peppers, carrots, green beans, potatoes, apples, black beans, onions, basil, sage, and thyme. Admittedly I couldn’t feed that many people all year long with my little garden, but for a few special family meals and a small suburban yard, I was just delighted with the results!

When it comes to learning self-sufficiency every little bit helps, and a few small successes can encourage you to continue into bigger projects. I’m already looking at my seed catalog for next year, how about YOU?