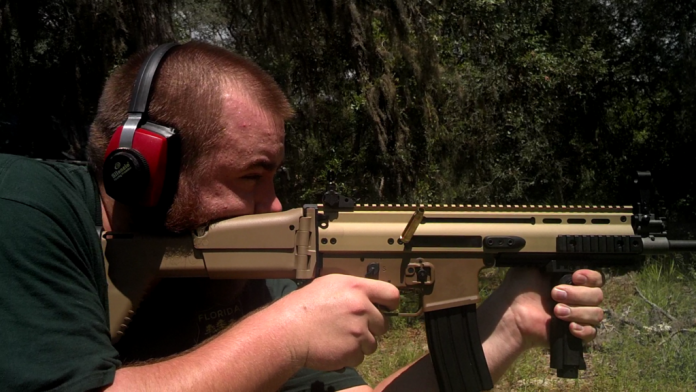 Editor’s Note: Travis Pike’s take on the SCAR, you all know mine already.

My SCAR 16s review so far has focused on a broad overview of the weapon. Part two will feature how the SCAR 16s handles, shoots, and feels. The intention of my SCAR 16S review is to give shooters on the fence an accurate explanation of the way the weapon functions and handles. I’m trying to avoid comparisons to any other rifle on the market. For a quick rundown check our first impressions post, or FN’s website, here.

On the Range – SCAR 16s Review

I was extremely excited to get to the range with this bad boy. My home range is maxed out at 25 yards. So for accuracy testing for a rifle I’ve got to travel. For the review, I shot the gun as it came from the factory. That means iron sights only.

At 100 yards I tested two types of ammo. The first is the always affordable Armscor 55 grain 223. This is the ammo I typically buy in bulk locally and it well priced for brass cased ammo. Next was some Fiocchi match ammunition, 77 grain. Because the rifle’s 1:7 barrel can stabilize the heavier loads I figured it would be worth a try. Due to the price difference I tested significantly less 77 grain rounds, only a hundred to be exact.

Accuracy proved to be as good as expected. I fired from the prone position, with a backpack acting as a sandbag. I used a basic bullseye target to measure groups. With the 77 grain rifle match ammo I averaged 3 inch groups. I blame this mainly on myself, and the fact I haven’t gotten much time at the rifle range recently. A fellow shooter at the range who is always shooting mil surplus bolt guns took some time behind the rifle. He was much more skilled than I and proved it.