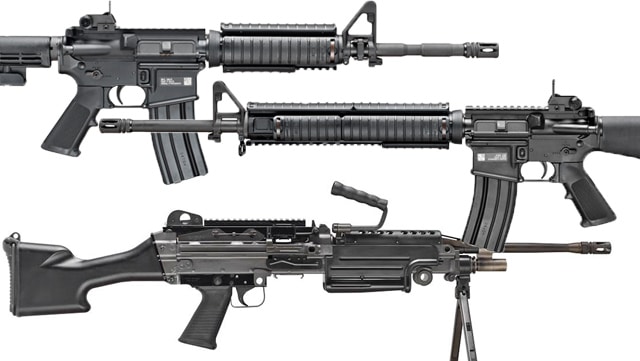 FN USA launched the Military Collector Series on Wednesday to make available commercial variants of iconic military weapons like the M16, M4 and the M249.

The guns are supposed to be identical to the military variations except for the action — each replica will be semi-automatic.

Probably the most renowned, the M16 has been in service with the U.S. military since 1963. In that time, it’s undergone at least four variations and a number of manufacturers have been contracted to make it. The military version costs $586 and the FN 15 Military Collector M16 will retail for $1,749.

The M4 was introduced in 1994 as a shortened version of the M16. Like the original, it has also had gone through a number of variations and manufacturers. In September, Colt and FN were awarded a joint $212 million contract by the U.S. Army to produce the carbines. The military version costs $700 and the FN 15 Military Collector M4 will retail for $1,749.

FN said the guns will ship this winter and hopes to have the rifles in stores by early 2016. Future product offerings under the series will be introduced at a later date.