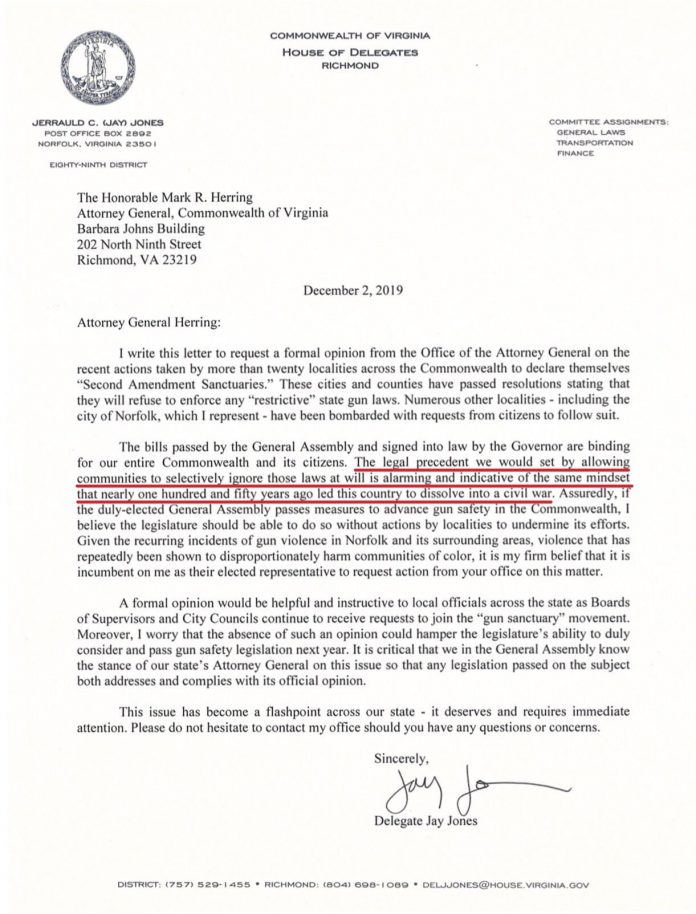 The letter above from Commonwealth of Virginia delegate Jay Jones to the Attorney General, Mark Herring, is indicative of a populace that has had enough. The gun owners of Virginia will not be made scapegoat for the actions of a few.

71 counties have thus far adopted ‘sanctuary’ statutes and stated they will not enforce Richmond’s onerous provisions on their citizens. The proposed assault weapons ban, which was lately amended to ‘grandfather’ existing owners as a concession to try and garner more support and make the measure more palatable, is one such measure. The proposed ban on firearms training is another.

The state officers are not under legal sword requirement to act on the federal immigration rule. They are sworn to uphold the state rules, not just their local ordinances.

And that’s a great point. Really swell. But what if they do not do so anyway? What if Virginia has reached the tipping point where ‘ the law is the law’ doesn’t mean anything anymore. Politicians the nation over, because of their beliefs on topics like immigration, have eroded the national respect and regard for the law so much that it does not hold the teeth and gravitas it once did. The jaded narratives and often outright lies told by these representatives and media outlets have left the public with diminished trust that legislative bodies are working in good faith.

It isn’t much of a stretch to see the mass noncompliance as par for the course. What is good for the goose is good for the gander and the parsing of words over parlance of what laws a locality is sworn to enforce based on it being state or federal rings hollow. It just sounds like an excuse to justify rules a particular side wants and ignore ones it does not instead of engendering respect for the law by pushing to change the law.

Example: If Congress today passed a bill that said – Illegally entering the country is a federal crime and will be prosecuted in conjunction with all felonies and serious misdemeanors. It will result in deportation if the crime(s) have a total sentence of 1 year or more and the convicted will no longer be eligible for immigration to the United States.

And then Arizona said, “No, we are a sanctuary state.” or “No, we will deport all illegals we find.” it begins to erode the public respect for the law. If you need a better example than these…

Prohibition. How did that one work out?

No, seriously. A U.S. Senator has threatened the sanctuary counties with removal of their authority, funding, and use of the Virginia National Guard as an option for Governor Northam to enforce the law.

Does anyone recall a little event in history… maybe where troops were used by the government to go and enforce a law about weapons in the hands of the colonist citizenry… Lexington and Concord ring any bells? Because if National Guard troops take the place of local police to enforce a gun prohibition in Virginia those parallels are going to be drawn.

Now the question is who blinks first? The incoming democrats with their aggressive gun control agenda or the fed up localities saying, “not a chance.”