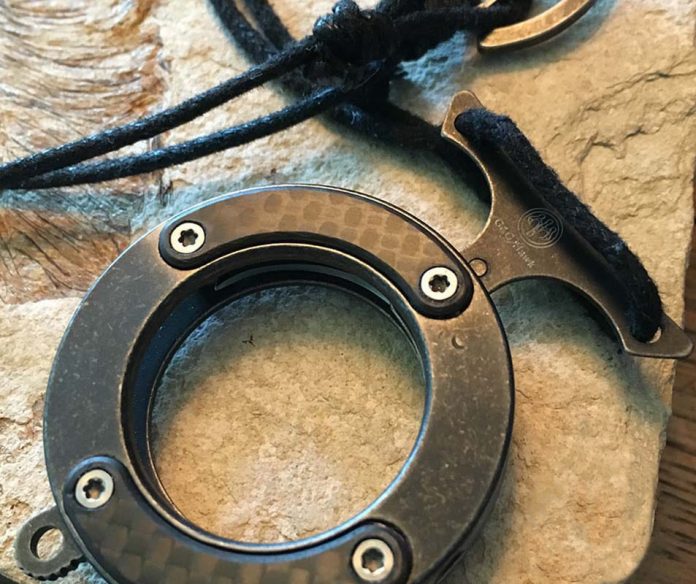 Pushing the limits of blade design is nothing new for the knife making team of Grant and Gavin Hawk. Now Mantis Knives has apparently made one of their most sought after custom pieces, the Vicious Circle, available as a factory offering.

This might be just the ticket for the bloodthirsty mom in your life — her day is coming up in just a couple months, you know. That isn’t to say you have to be female to wear and use it. I’ve been doing so, and I have nearly a forty year history of unblemished male heterosexuality.

Mostly. Although I do look good in silkies. Don’t judge me. 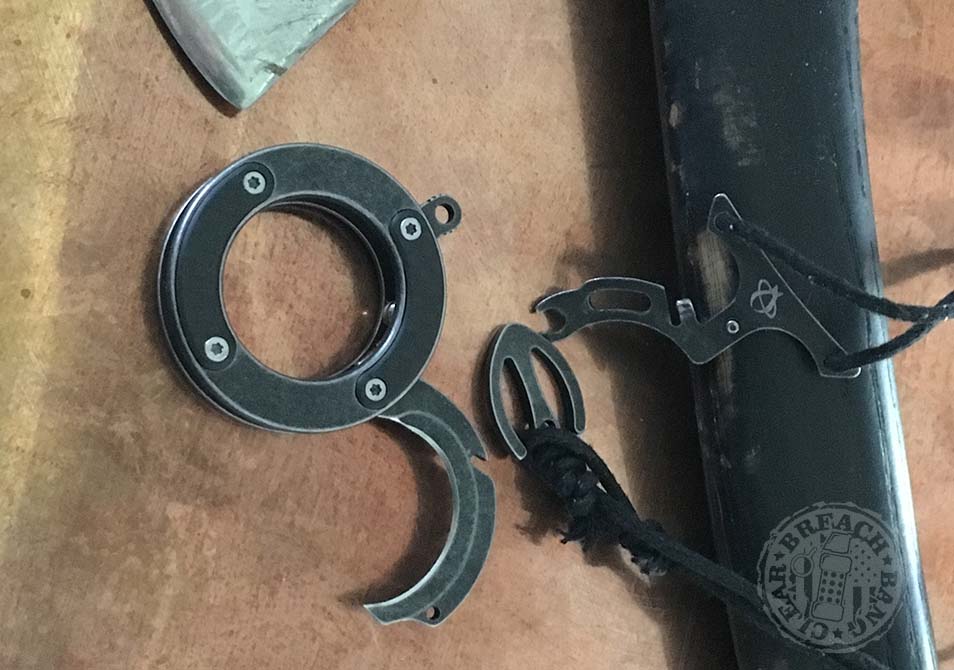 Like most items for review sent to me by our esteemed editor, the G&G/Mantis MK-14 arrived unannounced and with very little direction. A small note said “Hey Dickhead, try this out and write about it.”

Pulling the MK-14 out of its box, I was perplexed. Is it a knife? Is it some sort of post-apocalyptic jewelry? Well yes… it’s both. 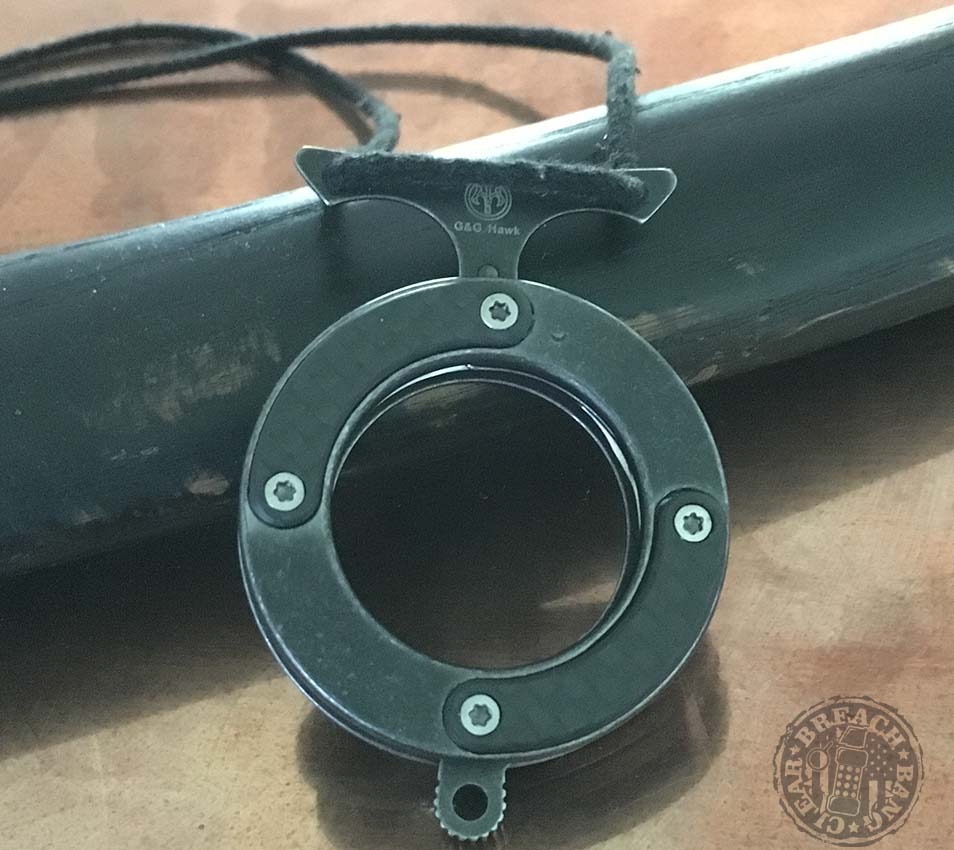 To the untrained eye, the MK-14 looks like a circular pendant on a simple cord necklace. The circular body is stonewashed AUS-8 Steel and adorned with semi-circular carbon fiber panels on the face of the ring. The cord is attached to a similarly finished yoke or “bail” that looks almost like stylized Mjolnir (Thor’s Hammer). The waxed cord necklace is attached in the rear with a stonewashed steel arrowhead shaped fastener and acts as an anchor for deploying the MK-14’s hidden blade. The wearer simply loops the index finger inside the loop while bracing the thumb against the edge of the circular body and then pulls down and while rotating the wrist downwards. As the body separates from the bail, the bail pulls the blade out of the ring and then releases once the blade is fully extended, allowing the user to utilize the curved, talon like blade for whatever task is at hand. 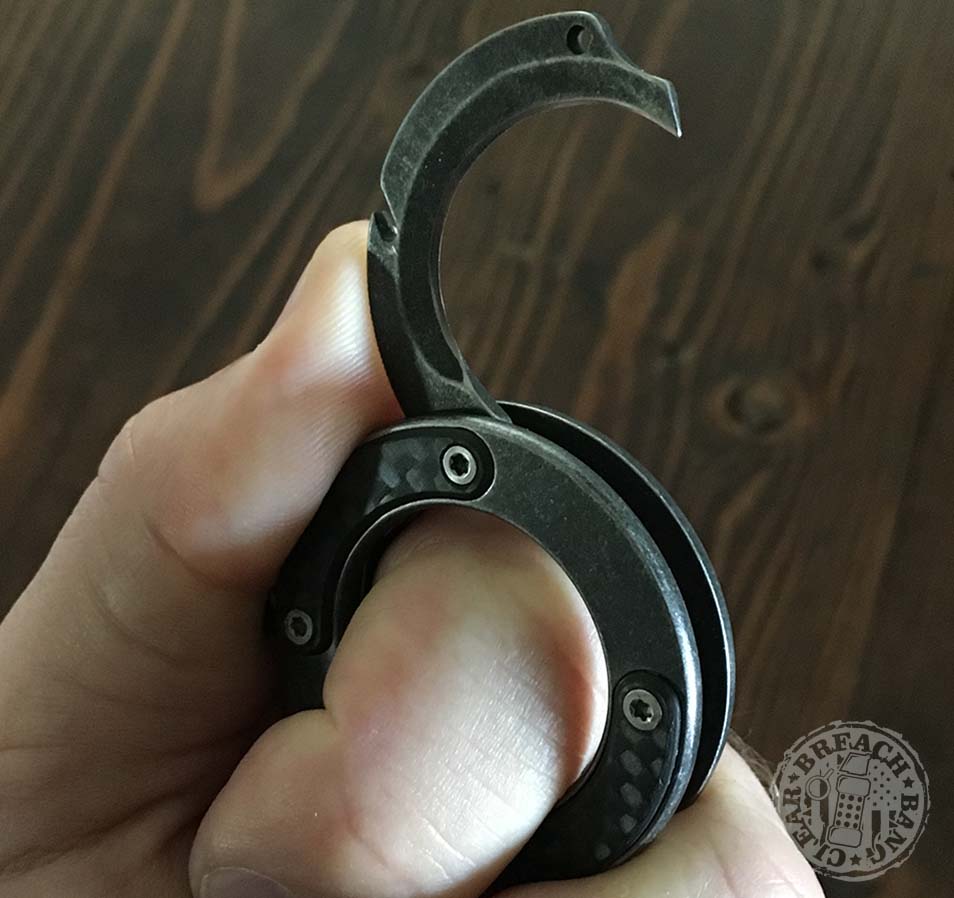 While I haven’t had the chance to use it as a last ditch weapon against rabid tangos, I’ve put the little blade to use doing more mundane things such as opening boxes, cutting fruit, and even opening the odd letter. Just to test the edge I used it to trim down some light kindling for a small fire. It performed all tasks with equal aplomb and has stayed very sharp. As a fighting tool it has limitations because of its size and shape, but for those willing to actually practice with it, the design has plenty of merit and the blade can easily be manipulated to attack vulnerable tendons and arteries. 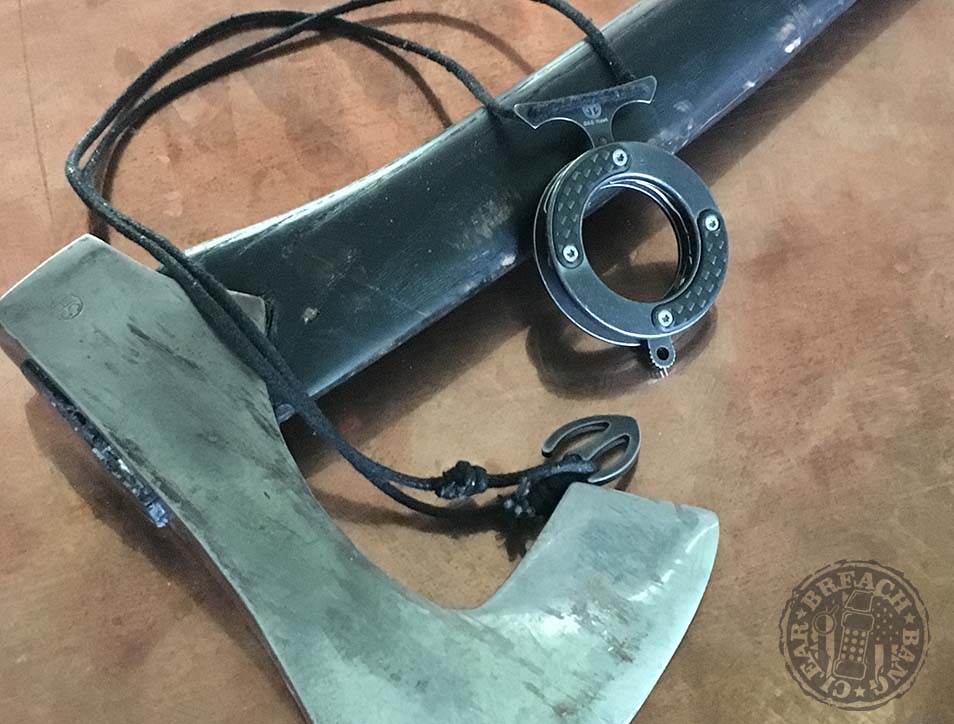 Here’s the designer talking about it.

While it is a concealed weapon by its very nature, its diminutive size should keep you out of trouble in most jurisdictions (although it’s on you to double check before you go strutting about with it). Its simple, rugged looks allow it to blend in and its styling matches the look of most contemporary men’s fashion, including Breach-Bang-Clear shirts and grubby old jeans. For those former Marine Officers out there, it will match your stupid little braided leather belts and loafers, too.

Actually, no it won’t. Don’t wear that shit. You look ridiculous.

In its role as a last ditch EDC accessory, the MK-14 performs very well. It’s well built, good looking and won’t attract attention or print under a shirt. Its design is well executed it, it deploys easily from multiple positions and can even be set up for lefties. It’s definitely worth the price of admission and is a worthwhile addition to an every day load out.

I’m going to show this video because some of you are way more likely to pay attention if there are boobs involved. Plus she does a great job of running down the features.

Hawk Knife Designs are on the interwebz right here.