Some people take the term firearm a little further than others. A company called Firequick takes the term firearm to the extreme. In fact, their firearms aren’t even technically firearms. They are flare-launching devices, but they are not your dad’s maritime flare gun he’s required to keep on the fishing boat. Firequick produces flare guns designed to set fires.

Believe it or not, sometimes you do, in fact, fight fire with fire. Wildland firefighters face a dynamic environment as they try to wrangle down fast-moving blazes. In fact, sometimes, the front of a fire is moving too fast to do anything but watch and plan. When water doesn’t work, and you can’t till a big enough line fast enough, you can slow or stop the fire’s path by removing any fuel in front of it.

This is known as controlled or prescribed burning. If you burn the fuel ahead of the fire, you can stop it. Burning the fuels create what firefighters call ‘the black.’ The black is the area that’s already been burned and offers no fuel for the fire. Firefighters work hard to control their created blazes but often have to move fast to do so. The Firequick nonfirearms allow them to do just that.

Firequick looked at actual firearms design to develop their products. Instead of just building a flare launcher, they adapted real, or at least blank, firing guns to the task. The first is a .22 caliber blank-firing revolver made by Alfa-Proj out of the Czech Republic.

Alfa-Proj makes a number of real revolvers, as well as blank-firing guns. These revolvers are fit with a special barrel attachment that gives a somewhat odd appearance. These revolvers cannot fire live rounds and can only utilize flares. It’s a six-shot revolver with a swing-out cylinder for easy loading. The massive trigger guard is designed for the heavy leather gloves that wildland firefighters use. Wildland firefighters go out by themselves with what they have on their backs. This offers a lightweight, handy option that can be carried amongst a firefighter’s gear. They produce a simple nylon holster to make it easy and safe to carry as well.

The second Firequick launcher is known as the Large Format Launcher. As you can see, it very much looks like an AR-15 with a can cannon attached. Just like the handgun, this Firequick launcher can only fire flares propelled by blanks. The LFL offers you a max range of 200 feet and can launcher larger, more powerful flares without punishing recoil. 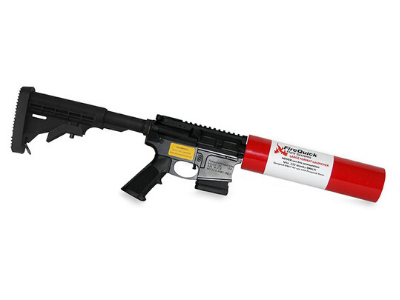 Firequick had to fight with the ATF to ensure this was not considered a firearm. A sitting Congressman at the time had to get involved to ensure it was designated a non-firearm. Who knew the ATF likes to be capricious and difficult?

Technically these aren’t guns, and legally they aren’t guns, but it’s easy to ask why something that is very similar to a gun used? There are a few reasons. Blank-propelled flares are nice between the primer is separate from the flare, and this helps prevent accidental ignition when the two are separated. 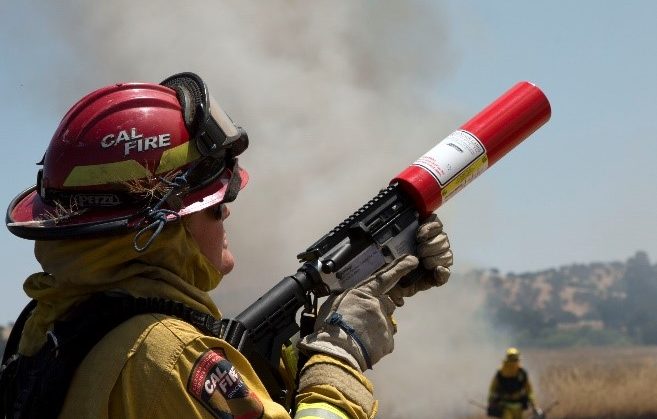 Second, they are faster to shoot and offer a more effective range than the average flare launcher. Finally, they are built to last. The gear firefighters carry has to be tough, and like real guns, these flare launchers are plenty tough and can be abused wholeheartedly without the worry of them breaking.

It’s somewhat ironic that a firefighter in California uses a device based on an AR-15 to help save California. I’m surprised Cali didn’t demand a ‘featureless’ version for CALFIRE. The Firequick launchers are an interesting way to prove that fighting fire with fire does work.