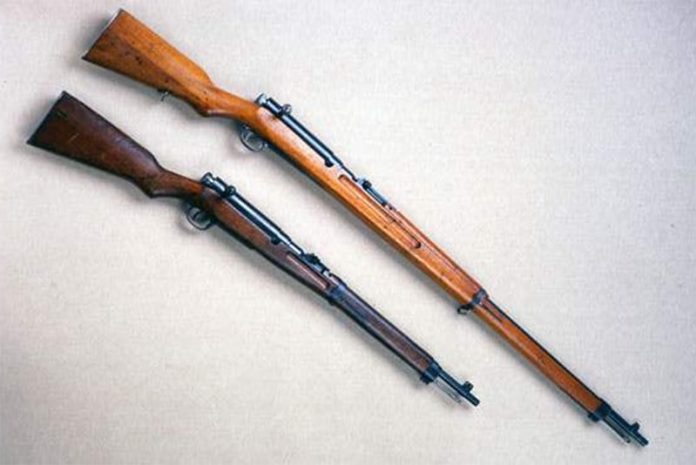 It’s another thing that turns up reading old, old firearms books and magazines, and if you’re old enough you can remember hearing it from gun-store counter clerks and hangers-on (then, as now, literally the worst source of firearms information this side of Hollywood, as they are just as likely to make up random stuff, and less likely to be called on it than movie directors). Hearing what? Things like:

These things are all coming to be recognized as arrant nonsense, at least in part by the emergence of specialized collectors who understand them, and publishers who release books about them. But as late as the seventies and eighties, that was the “conventional wisdom” of the countertop commandos.

Exercise for the reader: find a surviving infantry soldier or Marine from Okinawa or Iwo Jima (do it quick, as they’re fewer by the hour; that’s the human condition). Tell him that the Jap machine guns were contemptible. We will counsel you this: do not make that statement from within the radius that he can swing his walker at you. (Here’s video of a Type 99 firing its original 7.7 ammo, and a creative 7.62 x 29 hack. Note the rate of fire: the Marines sure did).

These beliefs got started for several reasons. One is that Japanese and Italian rifles were different to the familiar Springfield and the Mauser from whence its design came. These differences seemed like indicators that the Japanese and Italians didn’t know what they were doing, but if you think about it for a moment, that’s pretty illogical. What nation would consciously issue an inferior or unsafe weapon to its troops? What nation entrusts its weapons design to Bubba the Gunsmite, domestic variation? Not Japan nor Italy (both of which had robust ordnance establishments, as can be seen by their wartime ships’ and aircraft armament, and their talented engineers, as has been proven in peacetime industries postwar), but even today, Japanese and Italian firearms are considered less collectible and less valuable than their global competitors.

One reason for the persistence of dislike of Japanese weapons is their relatively crude finish compared to the beautiful rust-blue of their European counterparts. But this resulted from the fact that Japan at war’s outbreak was as resource-limited as Germany was during the production of “last ditch” weapons, as Shermans and T-34s did celebratory pivot turns on former arms plants. The resource limitation drove the Japanese to innovate, for example going to chrome linings (for strength, not just corrosion resistance) and phosphate finishes (for speed of production, not just corrosion resistance) before most of the world. 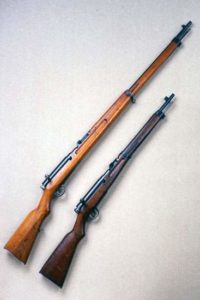 Type 38 (1905) rifle and carbine, 6.5mm. Standard Japanese weapons through early WWII. Not sure where we cribbed this image from — if you know let us know so we can give credit.

Both the “weak” Arisaka and Carcano actions were modern, the Arisaka being a clear Mauser derivative and the Carcano, while a design all its own, offered such modern features as forward dual locking lugs. When introduced (1891), it was arguably the most modern rifle in the world, and like its contemporary the Mosin-Nagant it, and its 6.5 mm cartridge, was still in service at war’s end. (Which came a little earlier for Italy than for the USSR).

Italian and Japanese machine gun designs were different, but that’s not saying that they were practically or tactically inferior. The high rate of fire of the Japanese LMGs is cited in almost every American memoir of Pacific combat. The Japanese could sustain this high rate, especially with the top-mounted magazine of the Type 99. (Guns of this design are much faster to reload, by an a/gunner, than a bottom-loading gun like the BAR is by its single-man crew).

Another reason to disparage these weapons? These nations lost. (Probably not a major reason, given the fanboys of all-things-German loose in the world today. We’re reliably informed that the Third Reich fell short of the planned 1,000 years). In the case of the Italians, there’s also an impression that they lost in part because they weren’t trying terribly hard (probably true for some individuals and not for others). Collectors might want the weapons of losers, just not quitters.

Yet another, and possibly the major, underlying reason for the belief, of course, is the residue of war-era (and “Yellow Peril”-era) racism against the Japanese, and northern European ethnocentrism against Southern Europeans in general, and Italians in particular, from the later waves of United States immigration. These expressions are less open now, but in 1976 you had no difficulty hearing negative impressions of Japanese and Italian firearms by countertop commandos, impressions that were invariably followed up by negative stereotypes (Japanese all had bad vision and made lousy shots; Italians wanted to make love, not war).

Let’s assume arguendo that there are two human phenotypes, call one “martial ardor” or “readiness to fight,” and one “strategic/conceptual ability” or “combat-oriented leadership,” that represent the scrappiness and cunning of a combatant. Let’s further assume that these phenotypes are to some degree heritable, and that there are distinct median levels in these traits in distinct groups. Let us make a fourth assumption, that the medians of these traits might be lower among the Japanese and Italian populations than among, say, Germans.

As the history of the war tells us, these two nations produced men and units that were the equal in “scrappiness” and “cunning” of any force in the world. Consider the thorough Japanese defeat of the ABDA allies in the first six months of the Pacific War, or the Italian naval special operations of the Decimo MAS, or for that matter their forerunners in the war with Austria-Hungary, the first proto-frogmen to sink a battleship.

If you still think that these two great nations produced junk guns, try to get some trigger time on any of the Japanese LMGs, especially the Type 99; or on a Beretta M38 SMG or its derivatives (which is what the MP40 wants to be when it grows up).

And don’t let yourself believe that an enemy weapon is an inferior weapon because you think the enemy is — well, choose your favorite put-down. Because whatever your enemy is, the guys who designed his weapons probably are not.