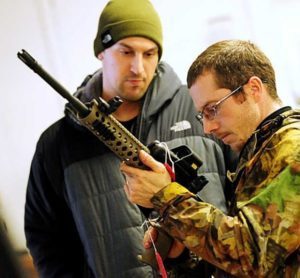 Parting with a firearm is never easy, but sometimes, it must be done.

Sometimes, it happens. You don’t use a certain firearm so much and it’s taking up space in your gun locker, or you fall on some financial hardship and you need to generate some quick cash. Firearms are a quick way to make some money. But how do you sell your firearm? This is something that most people don’t have any clue as to how to conduct themselves. Unfortunately, I’ve had to sell many firearms that I’ve owned over the years, but fortunately for you, the reader, that has given me some knowledge and tips that I would like to impart to you right now.

1) Your best option is to sell to somebody you know.

It goes without saying that the internet is a very strange and often dangerous place. Many websites, such as Craigslist and Backpage, have started to crack down on firearms classifieds, so your options in that department are also limited. The best and safest way to sell your firearm is to sell it to a friend, somebody you know personally and that you would trust with a firearm. Keep in mind that even with private sales, all local, state, and federal firearms laws apply, the biggest of these being that you cannot sell a firearm to felons, those who have been found guilty of domestic violence, or the mentally adjudicated. If you sell to somebody in one of those three categories and you are found out, then you will be punished in accordance with the law. Aside from that, your friends will be your best and safest option. You can invite said friend into the comfort and privacy of your home and conduct the transaction there, away from prying eyes and hoplophobes.

2) Your second best option would be a friend of a friend.

None of your friends have cash, or aren’t interested in what you’re selling? Perhaps a friend of a friend is. In this case, if you trust your friend’s word and they vouch for the buying party, then doing the transaction at home can work. Personally, if I don’t know the person, I prefer to meet at the mutual friend’s place, or in a public place, even if my friend vouches for them, as I tend to err on the side of caution. With the friend of a friend, you’ll want the mutual friend present to act as a witness. You’ll also want to generate a bill of sale, which we’ll talk about in a bit.

A grocery store parking lot is a solid choice in sales venue.

This should be common sense, but if the Army has taught me something, it’s that you must repeat common sense things just in case the Good Idea Fairy inspires somebody who is unknowing to do something that is not within their best interests. I have done meets with people who I have met on the internet. The first tip is to pick a public place. That way, should they get any ideas, there will be plenty of witnesses to back you up. Lots of witnesses tend to deter those with devious motives.

3) When meeting a stranger, don’t go unarmed or alone.

Another common sense tip. If I’m selling one of my guns, I make sure I have one locked and loaded on me. If you don’t have one, then borrow one. If you can’t borrow one, you shouldn’t be selling to a stranger. You don’t know if this person is a legit person or somebody with nefarious intent. Be prepared to defend yourself if necessary.

Also, remember that there is safety in numbers. This is a tip that I personally need to work out. I usually end up going alone, but I do go armed. Chalk that up to infantry mental invincibility syndrome.

4) Maintain positive control over the weapon until payment has been produced.

If these guys show up to buy your firearm, it would behoove you to walk away.

Obviously, you will let the potential buyer inspect the weapon for viability. Having said that, make sure the weapon on sale is either within arm’s reach or on your person. This may seem like paranoia, but this is actually common business practice. Notice when you go to a convenience store, the clerk will pull the product to their side of the counter until payment has cleared? The reason being is that if you reach across that counter, grab the product, and leave without paying, that’s a felony. It also gives them a chance to pull it out of your reach to deter you from theft. Same principle applies here. Make it an untenable option for the buyer to walk away without payment.

5) Generate a bill of sale.

This is a CYA move. You generate a bill of sale that includes:

-the serial number of the gun

-the agreed upon price

-the day that the transaction was completed

This way, should the firearm you’re selling ends up at a crime scene and the police come knocking on your door, you can produce the bill of sale and point them elsewhere. A bill of sale will save you all sorts of trouble. Keep them stored somewhere and do not throw them away. You never known when you might need them. If the buyer refuses to sign a bill of sale, then refer to my final tip:

6) Be willing to walk away.

This applies both to pricing and to suspicious activity. Set a price you’re willing to come down to, and name a higher price. Naturally, the buyer will haggle. If they won’t meet your bottom price, then don’t be afraid to walk away. Know the value of your firearm. Also, along those same lines, be ethical. Don’t try to stiff the other person. I’ve seen a lot of that recently, with people selling PMAGs for $60 a pop. Sure, free market economy and such, but it’s simply unethical in my eyes. Do right by the consumer, but don’t let the consumer screw you over on price.

You probably shouldn’t sell your firearm to this guy, either.

Also: if there’s something off with the buyer, even if you can’t explain it, then cancel the sale. This is definitely one area where you want to err on the side of caution. We have a responsibility as firearm owners to prevent these tools from falling into the wrong hands. If the buyer looks and acts sketchy and suspicious, don’t complete the sale and leave. Don’t go straight home, either: drive a scenic route back to your house to ensure the person hasn’t followed you.

Selling your firearm sucks, but sometimes it’s necessary. Just do your best to be smart about it. Take some precautions to protect yourself. Keep on your toes and somebody will walk away a new gun owner, while you’ll walk away with some extra money in your pocket.