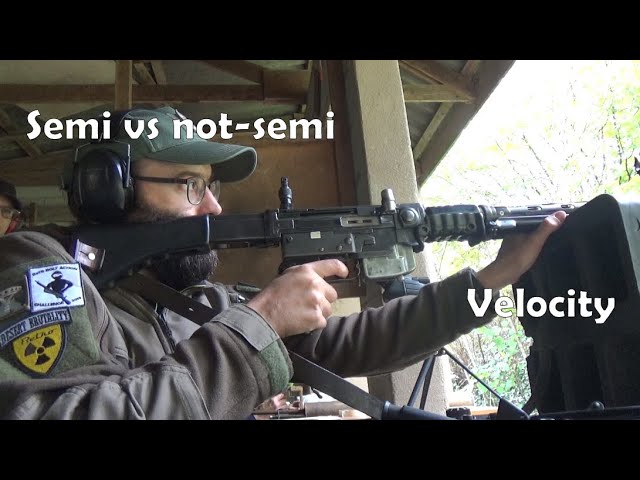 Bloke on the Range is back with a Chrono Test to take on the misconception that autoloading firearms, because they use a portion of their energy to extract and eject a fired round, rob that round of energy for going down range.

This is one of those situations where someone has thought a concept through logically, but has not applied the relevant mathematics (physics) to actually see if the hypothesis is accurate. They stop at “well.. it makes sense” and go no further down the diagnostic rabbit hole. This same logic is often applied to good firearm that failed for someone in a predictable or logical way, but they personally take the failure as the sole source of information on the quality of the item. A bad extractor for example, an inexpensive usually easily fixed part that will cause failures if it broken or out-of-spec. Those things happen. A firearm must be judged from its functional condition and how much effort it takes to maintain that conditions.

It’s that second one that really sank the M14… maintaining it was just astronomically harder than the M16 and it gave the squad no discernable increase in fighting capability based on hit percentages, reload times, and ability to maneuver.

But I am off on a tangent.

Back on topic. Do gas or recoil operated firearms rob the round of velocity?

Watch the video for the chronograph results, but the answer is no.

Why? Physics. Specifically hydraulic leverage. Yes, hydraulics. Gas is a fluid and behaves as such in a sealed system under pressure. Now a traditional hydraulic uses a hydraulic fluid that is already at a density where temperature and pressure do not influence its volume. You then use the reservoir of fluid to gain your leverage ratio and the lifting, pushing, crushing, etc. will occur.

A firearm’s gas system is essentially the same thing. It is a temporarily sealed hydraulic system used to push the action before the round exists the barrel. It works because the pressure is there to make it work and because of the high pressure and leverage it doesn’t need that much bleed off to fill the system and cycle it at the 500-1000 RPM rate that it moves. Fractions of a second to pressurize and purge. Delay recoil firearms like the G3/HK33 use the same basic principle, but instead of using the mechanical advantage of the sealed system to cycle a piston they are using it to extract the case directly (chamber fluting) and the leverage advantage comes from the rollers delaying the carrier until safe pressure is reached.

On the surface, the delayed roller system would seem to be the ‘better sealed’ but this entire pressure and purge happens so quickly that effectively the systems are equally efficient at what they do in different methods. Both also use the mechanical advantage to help eat recoil energy.

The video shows that there was velocity change in both rifles when the actions were sealed. However one increased and one decreased instead of the ‘logical’ increase in sealing both systems that ‘should have’ resulted. In short there is far more at play and standards of deviation for ammunition also come into the equation.

Now, is the theory itself wrong?

The systems don’t work on a steady push like a conventional hydraulic. They work on a quick sealed ‘shove’ that delivers all the needed energy for both the round and the action to cycle. Within the actual timing the round gets shoved first and then the action gets the shove at the gas block since the locked bolt is keeping the seal. In roller-delayed both are getting shoved at the same time but the rollers are creating a lever for the bolt to overcome via mechanical advantage, and that keeps the seal.

So yes, the theory that a gas or recoil operated firearm would be less efficient if it bled off and unsealed the system while still propelling the bullet is accurate.

But since that is not how the systems are designed and timed to operate, it is a myth.