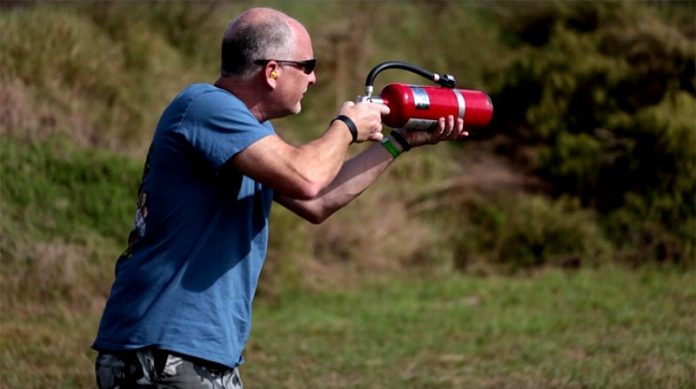 Mark Serbu is at it again with an incognito shotgun capable of hiding in plain sight in the form of a fire extinguisher that holds a shotgun surprise on the inside.

After a two-day brain storm build, Mark along with visiting YouTubers .50 Cal Val, Royal Nonesuch and others put the little red burner through its paces. Of course its single shot and “just a .410” but Mark thinks they can be made in a variety of calibers ( 20-gauge, 12-gauge, suppressed 9mm, .45, etc).

Downside, it’s an AOW (like a cane gun, flashlight gun, pen gun, whoopie cushion gun, et. al) but that is only a $5 transfer.

Below is Royal’s slightly more in-depth vid on the same AOW with a little overlap.