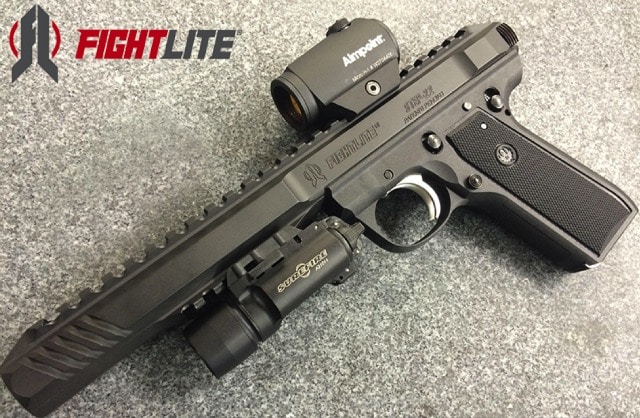 The STEP-22LS, or Strategic Target Engagement Pistol Low Signature, receiver fits Ruger Mk-I, Mk-II, Mk-III and 22/45 pistols and features 1913 rails for mounting accessories as well as an integral suppressor. With an overall length of 11 inches and weight hovering just above 24 ounces, the company says consumers can expect a lighter-weight, more accurate suppressed option.

Geoffrey Herring, the company’s chief executive officer and president, said engineers bucked the old standard for sound suppression and opted to develop a better way reduce noise up to 40 decibels without sacrificing accuracy.

“In creating the STEP-22LS, the experienced design team at FightLite Industries did what they usually do to achieve product excellence,” he said in a news release. “They removed the entire Ruger upper receiver from the design equation to eliminate all possible design compromises and re-engineered everything essential to meet our product objectives.”

Though military personnel have long used silencers in their duties, law enforcement and civilians are now seeing the benefits of suppressed weaponry. Last year the ATF reported a 39 percent increase in the number of civilian registered suppressors from 2014 to 2015. Silencers currently fall under the National Firearms Act which requires approval and registration prior to owning a device.

Noting the documented use of silencers in the military, Herring said suppressors, and specifically the STEP-22LS, are not limited to those in uniform.

“The STEP-22LS is another one of our exceptional products that will appeal to a very broad range of customers,” Herring said.

FightLite Industries is a special products division founded in 1997 under Ares Defense Systems. Ares focuses on development of small arms and accessories for military, law enforcement and commercial consumers.

The STEP-22LS is expected to begin shipping to customers starting July 1, pending ATF transfer approval. MSRP is set at$699.