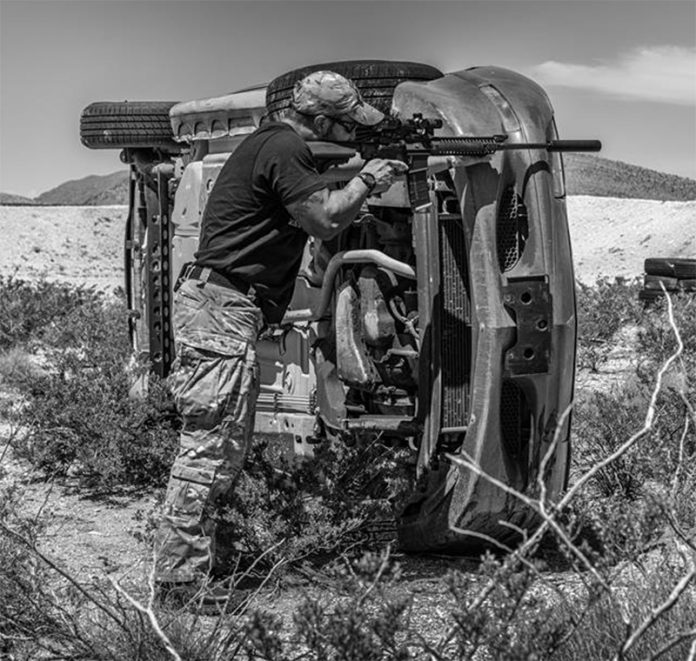 I’m sure we’ve all seen the videos on YouTube of a family being confronted by a group of aggressive individuals on the highway, the parents pulled out of the car and beaten in front of their kids. Or maybe you’ve heard the stories of private military contractors caught in an ambush on the roads of Iraq or Afghanistan. After my time in the Army, I was employed as a private military contractor stationed in Iraq. Most of my time in-country was spent protecting key leaders of the US government. Some of the training we were required to take included high-threat driving, shooting and moving – all while keeping situational awareness.

However, we never dove as deep into defensive shooting from a vehicle as I recently did appearing as a “guest student” here at a Texas course tailored to the PMC and average civilian who want to expand their weapons defense knowledge base.

Fighting from a vehicle is entirely different from fighting on the ground or field with weapons. It’s almost like sniping. The way a sniper must calculate his windage, elevation, temperature, barometric pressure, humidity, etc., is the same thought process that you must use when shooting from a vehicle to a certain extent.

There are advantages and disadvantages to fighting from a vehicle. For starters, one advantage the defensive shooter has is the immediate ability to obtain cover. The engine block, sections of the door, and the overall length of the vehicle can make for good cover.

The main problem the shooter will encounter is shooting through an angled windshield. When shooting from inside the vehicle attempting to place rounds on the threat, you can expect the first round to impact high on target. Depending on the caliber and the velocity of the round, the placement will vary. The exact placement of the round is a tough one to determine, but with the decreased velocity or the expansion of the round, its main purpose at the time is to punch-through or weaken the windshield to better assist the rounds to follow. As long as you maintain the general point of aim, the following rounds will impact on the intended target.

Key Tips For Shooting From a Vehicle

Nick is a former U.S. Army Ranger with multiple combat deployments to both Iraq and Afghanistan. During his service within the 75th Ranger Regiment, Nicholas served as an Assaulter, Heavy and Light Machine Gunner, and Designated Marksman.