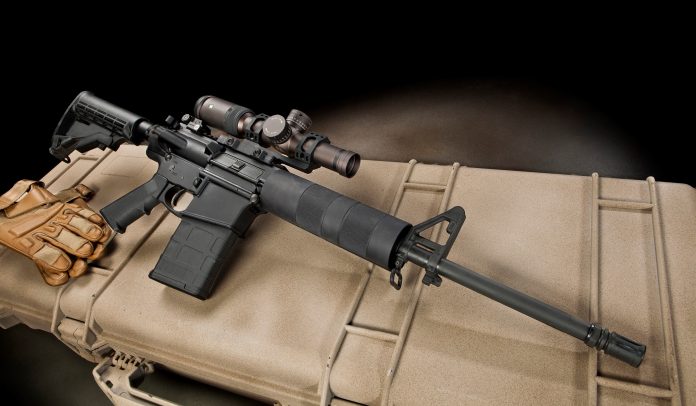 Use your handgun to fight, not to fight your way to a long gun.

I don’t start arguments with folks who have different backgrounds. My own background is  a combination of police service and industrial security with a bit of instruction and academic teaching.  My education is strong on legal issues- my degree says Criminal Justice, the first year the program changed from Police Science.

I find myself a good researcher. I worked for many years in a high crime area among a population that did- and still does- stupid violent things for little reason we understand.

I have no military experience. When I say I saw something it may mean I arrived just after the shots were fired and the body was still pumping blood. If I have learned anything it is that in order to save your life you need to shoot quickly and accurately. You must have enough gun.

The single greatest predictor of survival is past training.

That said, some pretty ridiculous statements are seen often enough to demand comment. One that I have singled out is the truism ‘A HANGUN IS ONLY GOOD FOR FIGHTING YOUR WAY TO A LONG GUN’.

On Instruction and Learning

Some of the finest instructors are military men. I have heard them say that a handgun is only good for shooting dogs. Well, we know that isn’t true but we also know what they are trying to say. Let’s look at this statement.

There are problems of course. On the subject of instructors, the ones with military or police experience are head and shoulders the choice you should make. A select few have both types of experience. The others may know how to shoot, but when it comes to fighting they just don’t get it. They’ve never fought, they shoot. Also look at the student body those instructors teach, are they novices and the instructor is just the most experienced novice?

For God’s sake avoid the ones that make it easy for you. As an example my cousin, a retired school teacher who can shoot well, recently went through a concealed carry class. The instructor allowed students to qualify with his personal .22 caliber pistol with a red dot mounted. He stood behind them with his hands bracing the student. There are poor driving instructors as well. So, find an instructor you can actually learn from. Not just someone who has been to a lot of schools. That is the background you need. I hope you don’t want the paper and not the knowledge!

‘Get to the Rifle’

Next, let’s look at that statement. Few of us have a long gun close enough to fight our way to when out about our daily business, in the workplace, or when traveling. So we don’t have the option.

In the home if the ball goes up I have a handgun on me at all times. Just too much crazy stuff in the world! Just the same if time is on my side I would unlock the shotgun. I probably won’t have that option realistically. Having faced armed men I know that these things come at you like a car wreck. It happens in the space of a few seconds.

Soldiers in harm’s way are in more danger on duty than I ever was in police work and are armed with serious long guns to complete their mission. They also have air support, high explosives, a squad, belt-fed machine guns, and all manner of more serious tools than just their personal rifle. The handgun is very much secondary in that context. As a peace officer I usually had a shotgun in the trunk and sometimes a rifle. In 23 years I never broke out the long gun. Handguns are a reactive weapon. The long gun was secondary or special circumstance.

Comparing a handgun to a rifle – a good handgun against a good rifle- is similar to comparing a Mini Cooper to a Dodge Ram. They just don’t do the same thing. The difference in power and accuracy is no small thing. Most students in my CWP classes are not very accurate past ten yards with their handguns.  A good shot with a rifle may make hits to any distance they can see the target. In personal defense the rifle is useful well past 100 yards.

That would be an unusual event.

The value of a rifle is in its three point attachment to the body and greater fit, feel, and natural handling. Wound potential is several times that of a good pistol caliber.  The pistol is much more difficult to master. The military does not not waste much time on handguns as their use is limited to a badge of office, to direct troops, and to guard prisoners. Those troops also tend to get more specialized time on those guns.

Just the same we like to have something on our hip. While I have strong preferences in handguns and calibers I realize that the ‘weak .38’ and ‘strong .45’ are much more alike than they differ compared to a .223 or .308 rifle.

A handgun is designed to allow the shooter to take control of a bad situation, or escape. Remember the car wreck? Situational awareness allows us to avoid trouble or be better prepared. If we see the truck turning in front of us we may take a detour from danger, change lanes, take the median or the shoulder, pop the curb if needed. If we see something amiss ahead of us on the street we may duck out of danger. If we don’t see it coming then we have to fight it.

The presentation moving to a solid firing position and getting a solid first shot hit are everything. Thinking about fighting your way to a long gun just isn’t part of the answer. It doesn’t solve your problem.

It is advisable to deploy a reliable handgun. There are plenty of bargain basement pistols. You must decide what your life is worth. A solid firearm (SIG, Beretta, CZ, Glock, as examples) will last for many years and provide reliable service.  A cheap copy of a major maker’s handgun means corners have been cut somewhere.

This is false economy. While a good man with a modest firearm may work with a rifle or shotgun you should purchase the best possible handgun. The realistic minimum caliber is the 9mm or a .38 Special. With a quality expanding bullet loading the 9mm offers modest recoil, good accuracy, and acceptable wound potential. The .45 ACP is better if you are willing to master the greater recoil and practice demands, you sacrifice capacity is all. In a fight, a modest but reliable rifle or shotgun will absolutely smoke any premium handgun. But again, access to a gun in the emergency is what matters and which is going to be with you?

A falsehood spread by some who should know better is that all handgun calibers are the same. After decades of unrealistic agonizing in the popular press over minute details in performance I suppose this is a push back. I have collected shooting reports and histories for decades. I am most interested in the tactics used and how humans reacted psychologically to shootings.

Ammunition performance is very interesting I admit. Some calibers are worthless per my conclusions. As an example I have on file several incidents in which the .22 LR failed miserably. The .32 ACP and .380 ACP seem no better. On the flip side of the coin I have an even half dozen reports with the .22 Long Rifle fired from a rifle. While there is a 200 fps advantage in velocity that doesn’t completely explain that the .22 fired from a rifle was effective with a single shot in all six instances, with four fatalities.

I have quite a few incidents on file in which six .22s were fired from a handgun, and one in which nine were fired, all hits. They had little effect. In one case a fellow took six .22s in the center chest, killed two people with a shotgun, and recovered to stand trial. The answer is shot placement. The .22 is quite easy to aim quickly and get hits with. The deficit in power is obvious, especially with just any old ammunition. There have been quite a few spurious claims in so called stopping power studies. If the events occurred at all which I gravely doubt the methodology is hopelessly bankrupt. Statistics, according to Colonel Cooper, are often used by rascals to impress fools. There was even a report circulated in the popular press in which drugged goats were supposedly shot under controlled conditions! To believe in such things is to believe in elves, Fairies, and Little Green Men. The test of science is that it is repeatable and verifiable. This rubbish wasn’t. There isn’t such a debate concerning rifle cartridges. At ranges inside of 100 yards the .223 offers excellent effect.  The .308 more so and at longer range.  No debate there.

So we have a firearm that is inferior to the rifle, no argument, but which we may carry not just on the hip but which we may actually reasonably conceal and reasonably carry consistently. The pistol may be presented quickly to face danger and in trained hands offer a reasonable defense against lethal attack. I am not going to send rounds flying wildly, or attempt suppressive fire, or any of the like in order to fight my way to a long gun that may or may not be available.

In fact if you are able to fight your way out of a situation it would be unwise to re-up with a more powerful weapon and return! You’re already out of danger! Stay that way! The handgun is one thing, the long gun another, and do not be confused concerning their roles or their availability.