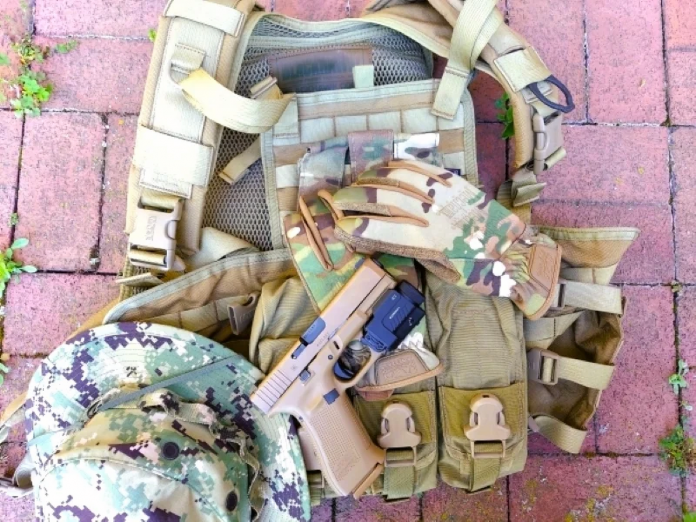 The first thing that I noticed is that the light/laser unit is surprisingly compact, with the dimensions being 2.64″ x 1.65″ x 1.22″. The light, including the battery, is 3.32 ounces. The finish is hard anodized (flat black) and the construction is T6 aluminum, which makes for a sturdy, hardy body.

The light will fit Glock rails and comes with a rail plate for mounting on the Glock rail already installed. It will also mount on a standard 1913 Picatinny rail and there is a plate for that included. This covers many bases as far as being able to mount on various weapons systems.

Caution! Before mounting the unit, be certain to unload the firearm!!

Mounting is easy and straightforward. Just loosen the mounting screw, fit the rail clamp over the rail you’re mounting it on, and tighten the screw. It is not a quick on/off system, but it is very secure and versatile.

To be honest, I’d prefer it if they’d include a throw lever in the mount so that it could be removed and mounted more quickly. The pistol I mounted the unit on is my Glock 19X, which I don’t often carry concealed because I normally have it as part of my home defense battery. It resides in a place where it can be grabbed quickly in an emergency. Because of that, a fast on/off mount isn’t really imperative for me for this particular pistol.

The light fits most full-sized pistols, along with some compact ones, including the Glock 36 and Springfield Armory XDs. As an option, this unit could do well on a carbine that has a Picatinny rail, it doesn’t have to be relegated exclusively to handguns.

There are two switches in the rear of the light that can be operated with either hand. A single click of either switch will turn the light on or off. If the user presses the light for more than one second, the user gets a momentary on mode.

To switch between modes, turn the light on and hold one switch on while the other switch to toggle between various modes, which include: White Light only, White Light With Laser, and Laser only. There is also a Strobe mode should the user elect for that option.

There is a lockout option – with the light off, press both switches at once for five seconds. To unlock the light, press and hold both switches for one second and the light will return to whichever mode it had been in before being locked.

There is also protection in the event the light becomes too hot (it will if used for a while) in which the light will reduce the output until it cools enough to resume operating at full output.

Light output is 750 lumens using the included rechargeable battery, which will last for 35 minutes. Rechargeable batteries are great because we no longer have to dump money into batteries. However, this light has a surprise – a standard CR123 battery can also be used, which will give us 500 lumens for one hour of run time. The versatility is nice to have.

With the standard battery, the laser will run for 17 hours, and with the CR123 it will run for 24 hours. The color of the laser, by the way, is red.

At 750 lumens, Fenix rates the light as being effective out to 180 meters, and with the CR123 battery, 140 meters. The light’s beam is nicely focused so that it will reach out far, and also exhibits a good amount of “throw”, so it will light up a room or an area while you are searching. It gives distance and width, which is great!

A few items are in the package with the light, including a manual, spare O-ring, Allen wrench (to adjust the laser), Glock and 1913 rail plates, a charging cable, and of course, the battery.

Being a Plain Jane, Old School type of guy, I rarely use lasers and other electronics, instead of relying on iron sights (or often plastic sights in this day and age). Yes, I might be a Neanderthal, but the irons never let us down. So why would I open my mind to using a laser?

A few reasons. First, even if the laser goes down, I still have the iron sights, it’s not as if they would be affected if the laser either breaks or I don’t use it. Just use the irons as per usual.

Another positive use is as a Force Option. I know quite a few instances of bad guys giving up when they have been painted by a laser (though you cannot count on such a reaction). The psychological effect seems to take the fight out of someone who is not very committed.

The fact that we can use the light in conjunction with the laser if we choose is an advantage as well, as we can blind the adversary while having a precise aiming point. As I like to say, options are always good to have.

In bright daylight, the laser is visible outdoors at closer ranges of about 25 yards. It can be seen further away but is more difficult to see on dark surfaces during bright conditions. For pistol work, I’d think it’s more than adequate for its intended purpose. If the light is a bit dimmer, the laser is very visible for quite a distance. Obviously, at night, it’s visible for an extremely long distance.

All in all, the light and laser combo is extremely well made, compact, and light. The finish is attractive and durable too. You get a high-performance light, coupled with an effective laser, which gives you force options. The retail price, at the time of this writing, is $119.95, which is a solid deal these days. The fact that it’s rechargeable is a major plus. I give this piece of gear two thumbs up!

Jim Davis served in the PA Dept. of Corrections for 16 ½ years as a corrections officer in the State Correctional Institute at Graterford and later at SCI Phoenix. He served on the Corrections Emergency Response Team (CERT), several of those years as a sniper, and also the Fire Emergency Response Team (FERT). For 25 years, he was a professional instructor, teaching topics including Defensive Tactics, Riot Control and Tactical Operations, Immediate Responder, and cognitive programs as an adjunct instructor at the DOC Training Academy. He was then promoted to the title of corrections counselor, where he ran a caseload and facilitated cognitive therapy classes to inmates. His total service time was close to 29 years. He was involved in many violent encounters on duty, including incidents of fatalities.