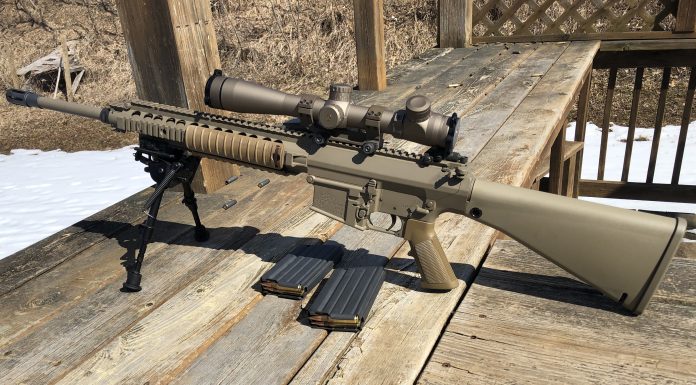 Semi-autos had been employed with success in a precision role in Iraq and Afghanistan to this point but all of those solutions were shoe horned into place. The M14’s chopped and restocked into an EBR Chassis, the M16A1’s turned into Mk12 SPR’s, and the small inventory of Mk11’s had all proven the concept of 7.62x51mm Sniper/Support rifle in working theory.

Knight’s job was to make that theory into a single cohesive working unit. They were successful.

Between the contract win in September 2005 and it’s ground debut in April 2008 (Task Force Fury), Knight’s set about making the most accurate and durable product they could to the military’s requirements.

As an Armament Corps. tech I have a little insider information on why certain features were chosen or added. Many were practical reasons, the barrel system is optimized to produce the required accuracy at sustained rates of fire that other systems simply couldn’t produce (M14).

Some were because “it was in the paperwork”, there are features in the buttstock for example that were put there or not put there just to make weight. They are then swapped with a superior part in a Product Improvement Program (PIP) because then they don’t have to conform to a weight requirement. Government at its finest.

11 years after hitting the ground in Afghanistan the M110 has “technically” been replaced by the M110A1, an H&K product.

But that technicality hasn’t stopped their purchase. The M110 in its precision glory is still a rifle to be reckoned with and will be for years to come.

Can a non government consumer acquire an M110?

Yes, but with a minor catch…

The M110’s are DoD contract rifles and nearly every single rifle, and thus every part, Knight’s builds goes straight to the waiting arms of DoD procurement, and from there to the unit that is in need of it.

“But… you’re shooting an M110 in that picture?” -An acute observationalist

The M110 is a Knight’s SR-25 variant, like the Mk11 before it, and an SR25 lower can be built out into a parts complete M110. But the civilian lower will be marked SR25 unless you get the markings altered yourself.

Operation Parts and their FFL arm, Small Arm Sales, is the premier consumer level dealer for Knight’s Armament. If you want a KAC product this is the place to look, and if you don’t see it then ask for it.

Starting with an in stock SR-25, Operation Parts strips the whole receiver bare. The proper 5R barrel, gas block, URX Rail, and stock are all ordered and assembled onto the bare gun. Proper FDE coating is applied and…

Like most new things the M110 system had its detractors, critics, and a few of its own problems. An issue arose resulting in the general rumor that the rifle was ‘finicky’ and dirt averse. A poorly reported on DoD solicitation in 2011 seemed to confirm all those rumors.

It wasn’t the case. The M110’s were working fine in their role. The accurate direct gas rifles were delivering in their intended niche and their users were largely pleased. What the memo and solicitation were about was lighter, more mobile, more compact variants of the gun retaining most of the capabilities. A CSASS. (More on that to come)

The number one complaint from my own battalion’s Scout Snipers was that, for a rifle that we had been told was designed to “blend” with a Marine Corps squad, it was the wrong color. Observers looking at a squad imbedded sniper team could pick out snipers rolling with M110’s just as easily as anyone rolling with M40’s, the rifle looked different. So that wasn’t a legitimate selling point.

It’s higher rate of fire and accuracy certainly were.

The M110 is required to fire M118LR 175gr (now replaced largely by MK 316, a more all climate friendly 175gr variant) in a 1.1 inch or smaller grouping at 300ft (100 yards) using three 10 shot groups with the suppressor on or off. Additionally requirements stated an Average Mean Radius (AMR) of .68 inches using 5 seperate 5 shot groups. The rifle is truly accurate.

“1.1 inches? That’s not minute of angle? My X brand rifle is sub-MOA! The military is stupid.” -Somebody with an X brand rifle

Sorry to bust the bubble, but your “sub-moa” gun probably isn’t. Not in the true sense. Almost any rifle can print a sub 1″ 3 round group, it’s not a statistically significant measure of accuracy. Can the rifle do that with 10 rounds? Can it do so consistently?

This one can. The heat sunk heavy 5R rifled barrel has a maximum acceptable accuracy of 1.1″ using a 30 round measure.

Even using the comparably terrible M80 ball the M110 is still incredibly precise. I was printing sustained groups under 2″.

As SOCOM and others start playing around with high accuracy rounds like 6.5 Creedmoor I would honestly not be surprised if the we see a selection of 6.5 or another ballistically superior variant. Especially considering that they can make the conversion with only a barrel change and updating any literature to the new rounds effective range and ballistics.

But for the moment the 7.62’s are the standard and ammunition is abundant and affordable. Federal M80 ball from Widener’s and Sig’s 168gr and 175gr Match kept the M110 fed and happy.

A few. The M110 represents the pinnacle of the .308/7.62 AR platform as a rugged precision instrument… in 2008. The rapid pace of change has left the M110, like the M16A4 and M4/M4A1, as a weapon system with a technical data package that is becoming more obsolescent as time progresses.

Can that be corrected? Certainly, it wouldn’t require a tremendous effort either and we could very well see that from the military. However that is a tremendous additional spend on a product that works as advertised.

This isn’t a ridiculous or unuseable weight, the M249 is heavier, the M16 with an underbarrel grenade launcher is comparable.

46.5″ in length with suppressor certainly qualifies it as a longarm and runs into the constraints that longer rifles do, especially in a CQC situation. But there are solutions for that too, offset irons or RDS.

The M110 is brilliant at the things it can do. There are simply things that it was not designed to do. It is a precision rifle first that can be utilized as a battle rifle at need, not a precise battle rifle.

For personal use, it’s easily one of the more costly investments you can make. It can have a 5 figure buy in price, especially considering putting good glass on it.

For that investment though you own the standard of the AR-10 derived precision rifle systems. The collectable nature of such a significant milestone in the history of sniping also appeals highly.

It might not be for everyone, but for anyone wanting to chase such a rifle down for the inventory it is well worth the tag.

Operation Parts is the place.

Once you have a rifle you need to feed it. Double check your stock and refill before your next class, match, range day, or just in case. Don’t let the visible bottom of an ammo can make you sad.