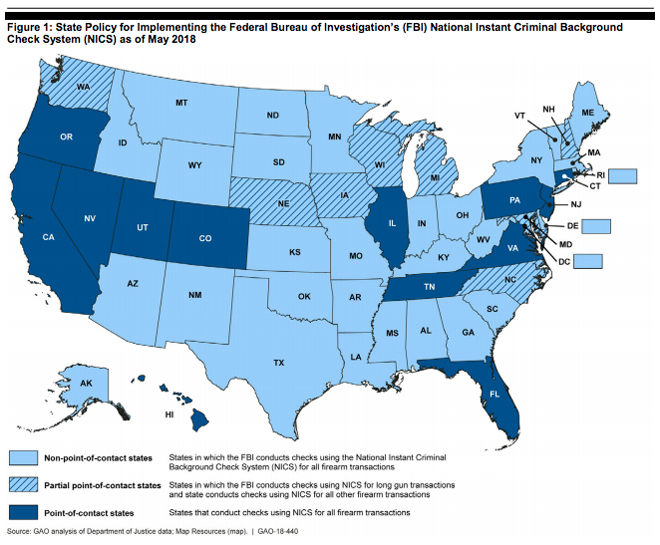 States in dark blue were the ones examined for the study. (Graphic: GAO)

Internal watch dogs found that the ATF investigated only a small percentage of individuals denied a firearm through the federal background check system and just a mere fraction of a percentage point of those individuals were prosecuted.

For the report published last week, the Government Accountability Office reviewed 13 states that use local or state agencies to process checks through the National Instant Criminal Background Check System.

Out of 8.6 million firearm-related checks in Fiscal Year 2017, they denied 112,090, the report showed. Then, only 12,710 of those cases were investigated and 12 actually prosecuted by the U.S. Attorney’s Office.

While the figures themselves are staggering, both the ATF and U.S. Attorney’s Office say investigating denials may not be the best use of their time.

As the number of cases referred to the ATF grows — an increase of 59 percent over six years — field offices have resorted to sending “warning notices” to denied persons in lieu of prosecution rather than using their limited time and resources, ATF officials told the GAO.

On top of that, the U.S. Attorney’s Office said prosecuting denial cases can require significant effort and may offer little value to public safety compared to other cases involving gun violence, the report said.

Also, state prosecutors echoed that sentiment, saying gathering evidence to prove individuals knew they were prohibited buyers is a challenge. Some states, however, make an exception in cases where the individual has a record of violence or other serious offenses.

Officials from 10 of the 13 states said they did not investigate or prosecute the denials because of either a lack of resources or legal authority, the report said. However, the remaining three investigated a high proportion of the denials. One of them reported about 1,900 referrals for prosecution and about 470 convictions.

As a result of the report, the GAO along with the Justice Department recommend that ATF field offices issue warning letters to those denied a firearm as an enforcement tool, at least until there’s a policy change.

Audits in years past revealed similar results. While pro-gun organizations have argued the Justice Department should prioritize prosecuting those who lie on the background check form, the feds maintain that there are limited resources to pursue such endeavors. However, earlier this year, the Justice Department launched an effort to enforce existing federal laws. Weapons prosecutions are already up some 22.5 percent from last year.