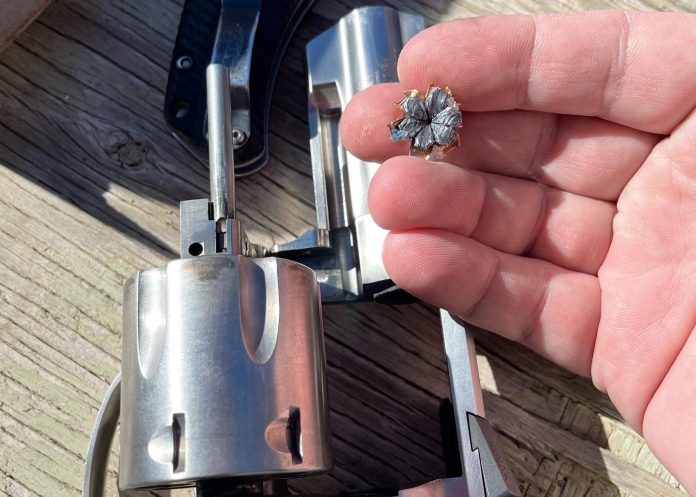 I was talking to Chuck at the recent Revolver Roundup held this past weekend at Gunsite in Arizona, where he shared this absolute GEM of a quote about terminal ballistics. He said he had that realization while watching an autopsy where the coroner fished a fully expanded Gold Dot out of a guy. When he said that to me, it was like a bomb going off in my brain, to the point that I decided to check some numbers.

Turns out he’s right (which isn’t surprising, because Chuck is a smart dude). If you look at the dimensions for expanded quality hollow point ammo like Federal HST or Speer Gold Dots, they all expand within a range of about 0.50 inches to 0.75 inches regardless of whether it’s a 9mm, 40 S&W, or 45 ACP. 18th century muskets had a wide range of calibers, but the two most common muskets were the Brown Bess used by the British, and the Charleville used by the French. The Brown Bess was a .75 caliber, and the Charleville was a .69 caliber. The rifles of the era were usually chambered in somewhere between .50 and .60 and, like the muskets fired a lead round ball.

But wait there’s more! Common service pistols have muzzle velocities that range from around 800 FPS at the low end up to around 1200 FPS (and a little higher), right? Care to guess what the average muzzle velocity of an 18th century musket was? 800-1200 FPS depending on the powder charge. How wild is that?

Now, this does fall apart a little bit when you look at the weight of the projectiles, since a Brown Bess musket ball weighed about 500 grains, which is more than double the heaviest 45 ACP projectile. But even with that, it’s interesting to note the similarities. This probably is hitting me even harder because one of the themes from the Revolver Roundup is that there really isn’t anything “new” in the sense of gunfighting, it’s just that a lot of stuff that was solved before the internet existed was never written down.

And now, after 100 years of handgun ballistic development, we finally have projectiles that perform as well as a shoulder fired musket from the Revolutionary War. What a time to be alive.

Note: The Revolver Roundup will be held at Gunsite again in 2022, and it’s already open for signup!