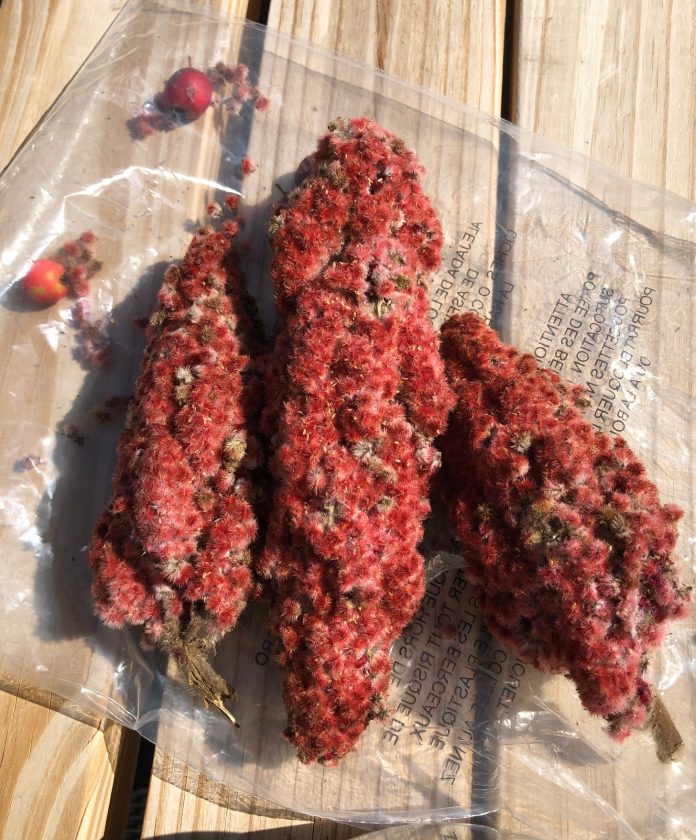 Fall foraging season is in full swing again, and the opportunities abound. In this pandemic year when household budgets may be tight due to job loss, who can hate free food and wild sources of nutrition?

My daughter and I have made two recent trips up to the family property. This is what we came home with and what we did with it.

I’ve written about Autumn Olive before. This shrubby tree, a native of Asia, was purposely planted half a century ago and earlier in waste areas and roadsides to stabilize soil and provide browse for wildlife. It was so successful in that niche that it is now considered an invasive species.

Nonetheless, the berries this shrub produces every fall are edible and quite nutritious. Part of the reason it became invasive is because the berry production is so prolific. Some years are better than others. This year was a bit of a slow year in our area due to lack of rain, but two years ago the branches were literally weighed down with fruit.

Identification of autumn olive is not difficult and becomes easier with familiarity. Once you know what you are looking for you can even spot patches of these trees from the highway. The silvery underside of the leaves blowing in the wind is a giveaway, as are the silvery spots on the fruit. Thus, one of the nicknames of this species – “Silverberry”.

We’ve picked about three quarts of berries so far this season, and I’m hoping for a few more. Picking through and stemming them at home is a bit of a pain, but they freeze well for jam-making later when there is more time. So far, I’ve got one batch of straight jam finished and am planning another one as a combo with blueberries and peppers. Then there will be fruit leather if I have any more left. Free pandemic fruit for the win!

Sumac is one of those plants that I’ve been dimly aware of all my life. I remember it in the field edges even as a child. I just never knew that it was edible until relatively recently. It turns out that the bright red fuzzy flower/seed clusters that make this tree stand out in the landscape are the parts that are edible.

I finally decided to try it, so on one of our woods wanders I cut off some of the fuzzy seed heads to bring home. (I’ve taken to keeping extra plastic bags in my pack for just such a purpose).

I read up on the cleaning process ahead of time and I’m glad I did. Being forewarned about the worms that sometimes live inside the seed heads allowed me avoid their gritty poop, and pick only the fresh outside portions for making pink sumac-ade.

After the picking/cleaning the process was easy – add cold water and infuse overnight in the fridge. Then strain, add sugar if desired, and drink. Further reading informed me that the reason for the cold infusion rather than making hot tea, is that the heat can sometimes extract more bitter acids than are palatable. Thus, the consensus is that cold pink “lemonade” is the drink of choice with Staghorn sumac.

Mine did indeed taste lemony – rather like a glass of water that had one of those small restaurant lemon wedges squeezed into it. Not strong, but slightly acidic and definitely there. Adding a dab of sugar intensified the flavor. It also had a lovely “pink champagne” color.

Sumac “lemonade” is reportedly high in Vitamins C and A, and also various antioxidants. So If you don’t live in the tropics or have a backyard citrus tree, in a collapse situation staghorn sumac will help keep scurvy at bay. Good to know.

Some cultures use the powdered fuzz as a spice/condiment in cooking, which is something else I didn’t know about this humble weedy tree. Apparently you can process the red fuzz down and use it for a colorful and citrus-y kick on almost anything. I’ll be trying that next!

This next find was the crazy surprise of our woods foraging this month. As we rounded a bend of the old logging road on the property, I saw a white “something” on the hillside along the path. I assumed it was a discarded grocery sack that some trespasser had left. But as we drew closer it became apparent that this wasn’t garbage, it was a fungus. A Giant Puffball Fungus to be exact.

There were actually two of them at the same location. We picked the largest specimen. It was as big as a basketball and surprisingly heavy. I assumed it was full of air, but it was actually moist and dense instead – like heavy wet memory foam.

Per identification instructions, we cut it open there on the trail to make sure it didn’t have any gills and wasn’t discolored on the inside. It was solid white flesh, so it was edible and good to go! I had another plastic sack in my pack, so we bagged it up and took it home.

My daughter saved about a quarter of it for us to try and gave the rest of the huge specimen to her friend who forages wild mushrooms. I am not a big mushroom fan to begin with, so I left it to my daughter to figure out how to cook/prepare this mutant ‘shroom.

She decided to cut it up into strips, bread it, and bake it into “fungus fingers”. As much as I am not a mushroom fan, it actually wasn’t bad. There really wasn’t much flavor at all. All I could taste were the Italian spices from the breadcrumbs. I’m told that giant puffball works a bit like tofu that way – it takes up whatever flavors it’s cooked with.

I was also a bit worried about the texture, but the breading was crispy, so I didn’t get any mushy foam rubber mouth feel. That was a relief. I’m funny about food textures, but this turned out fine.

It’s not something I’d want to eat every day, but as a forager’s culinary experiment it was interesting. Despite my brother’s jokes about Lovecraftian spores, I’m glad that I tried the giant puffball.

And I was still alive in the morning to tell the tale.