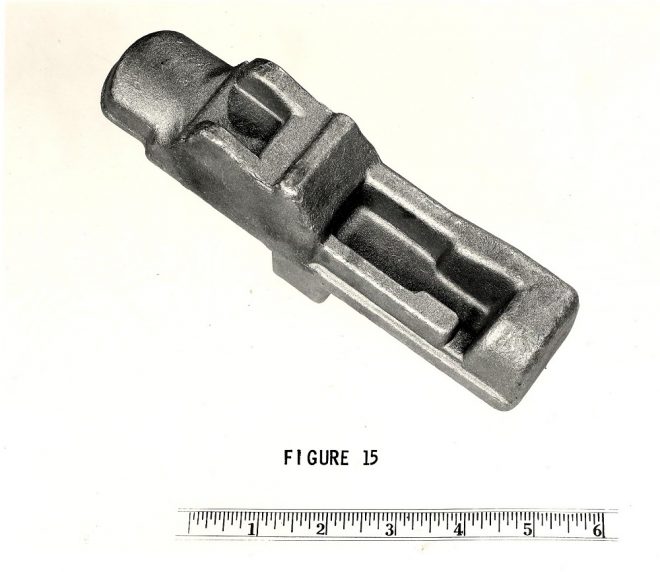 The last rifle built for the U.S. military at Springfield Armory was the M14, and historic photos from its production vouch that it was made “old school.”

Put into production in 1959 to replace several weapons to include the .30-06-caliber WWII-era M1 Garand, the select-fire M14 would be manufactured by Springfield Armory, Winchester, Harrington & Richardson and TRW through 1964. In all, more than 1.3 million of these 7.62x51mm chambered battle rifles were cranked out before the line was closed in favor of the contractor produced M16.

A rough forging for an M14 receiver. This would be milled out to a functional component (Photos: Springfield Armory National Historic Site) Milling out the receiver Checking an M14 barrel with a borescope, a common task still seen today on the floor of gun factories Checking the tolerances of a barrel. PPE was kinda optional back in the 1960s. Turning a block of walnut into an M14 stock Carving the barrel and receiver grooves in the M14’s wooden stock. While overseas NATO allies used plastic furniture on their FN FAL and HK G3s during the same era, the Army stuck with wood on the M14 Staining and fitting the M14’s wooden stock, a task not too different from the Armory’s past work on the M1 and M1903. Accuracy and target testing. The M14 proved to be an accurate weapon in service, living on as the M21 sniper rifle and later as a Designated Marksman Rifle through the early 2000s. Function firing an M14 on full-auto. Note the four spent cases in the air. Besides the semi-auto M1 Garand and M1 Carbine, the M14 was intended to replace the M3 submachine gun, select-fire M2 Carbine, and the M1918 Browning Automatic Rifle. Packing an M14 for shipment. In all, some 1.4 million were produced by Springfield and three government contractors. Checking the packing and including cleaning kits and accessories Transporting M14s in cargo containers. These containers would be boxed in connexes and shipped to bases. The first unit to be equipped with the new gun was the Army’s 101st Airborne Division in 1961, followed by the Marines the next year. Springfield Armory backed their in-house designed M14, even going so far as to run a 30,000 round test of a production gun in Sept. 1961.

While the government’s Springfield Armory closed in 1968 and today is part of the national park system, Illinois-based Springfield Armory was born in 1974 and has long specialized in semi-auto commercial variants of the M14, today’s M1A. Check the great selection of M1A variants and more inside the Guns.com collection of new and Certified Used Guns.