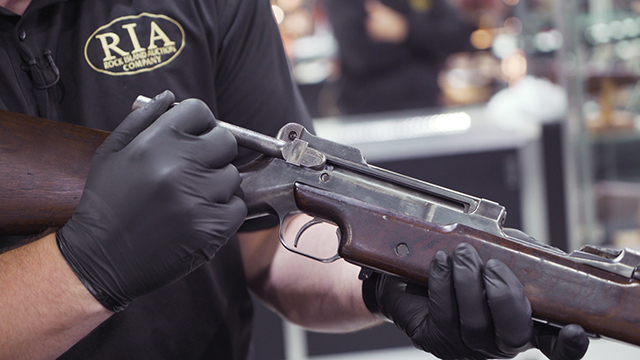 “This is one of (John) Garand’s earliest designs for the rifle trials that would eventually, of course, select his rifle and become the greatest battle implement ever devised,” said Joel Kolander, RIA interactive product manager. He explained the Garand rifle was “getting all the attention” for September’s Premiere Firearms Auction.

What makes the design differ from the final design, Kolander explained, the Model 1924 uses a primer actuated design, which was scrapped because the military wanted to use a different type of powder used in ammo. Yet, Garand made about 20 or 25 rifles using that system. Kolander added the model was presented to Garand as a retirement gift in 1953.

Perhaps equally, if not more, fascinating than the gun itself is everything else that comes along with it. The lucky buyer took home the specialty tool that Garand developed to adjust the massive front sight on the gun, a jar of gun lubricate that was addressed to Garand at the Springfield Armory, and then a very fragile box of 30-06 primer-actuated rounds. Who knows if they would ever fire, highly doubtful, but still very cool!

Finally, the crown jewel of bonuses, the buyer receives a little black notebook with notes on the 1924 design from Garand himself. Many are addressed to military officials and also contain yardage markings and test results.