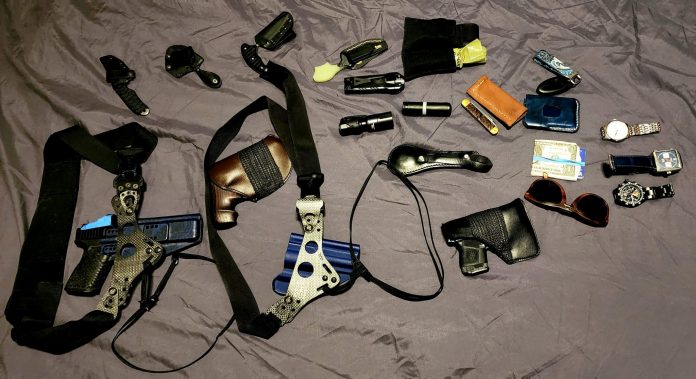 The term “Everyday Carry” gets bandied about quite a bit in the corners of the internet where self-defense is discussed.

The phrase implies items that one would carry with them every single day.

Well here’s the challenge: I’m not doing the exact same thing or going to the exact same places every single day. Therefore, since mission drives the gear train (to steal a phrase from the late Pat Rogers), what I’m doing and where I’m going might influence my choice of defensive tools.

This is my EDC.

More accurately, these are the elements from which I select my EDC on a given day.

The selection is dictated by a combination of risk profile and and the level of discretion required.

The G19 is obviously the most optimal setup, but the hardest to truly conceal, especially in lighter weight or more tailored clothing. The P32 is my “I’m virtually guaranteed not to need a gun” gun. The LCR is the one that ends up in the rotation most often these days. It’s a good balance of performance and discretion for my needs most of the time. The pocket is slightly more accessible, the deep carry Enigma is lightly more undetectable.

I generally don’t carry a knife. If I AM it’s typically because I’m going someplace where I either can’t or really shouldn’t be carrying a gun, but still want to have a lethal force option available. I’ve been exposed to enough of the Shivworks/IA Combatives curriculum that I know how ugly and complicated it can get.

The medical is pretty self-explanatory. I personally feel like TQs are a little over-emphasized in the private sector for the wrong reasons. I suspect their prominence in LE/MIL is because the presence of body armor reduced the number of penetrating injuries to the torso, so you see a much higher concentration of limb trauma. Not to say that TQs are bad to have, but I think the justification for them is drawing from a skewed data set.

I’ll carry a light if I’m out in the afternoon or evening. It’s not an essential for me (outside of hurricane season) since I mainly exist in the cities & suburbs, and there’s virtually no instance where total darkness is a reality.

POM is the 100% essential for me. It’s the thing I’ll literally never leave the house without (short of getting on an airplane). This and good verbal agility/social skills are doing to address 90+% of the social friction I’m going to encounter.

Saps are legal in Texas, and have the benefit of being the only tool I’m aware of that can modulate between deadly and less lethal force depending on how they’re applied. Impact weapons also have the added benefit of being the easiest to improvise effectively. Having some purpose build force options that don’t overtly look like defensive tools are also hugely beneficial.

The small pocket knives were called “pocket jewelry” in one of Tamara Keel’s recent articles, and she’s absolutely right. I like gear that’s aesthetically pleasing as well as functional if at all possible. All the other support gear is pretty much just to make life easier.