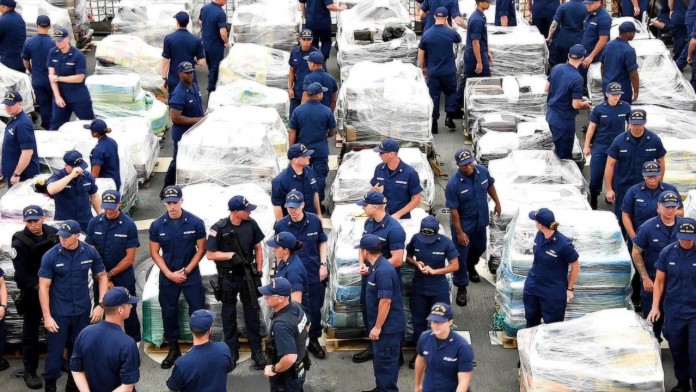 Following a string of seizures by the Coast Guard Cutter Stratton in the Eastern Pacific, the ship made the largest offload of blow in U.S. history this week.Stratton, a new 418-foot National Security Cutter returned to her homeport at Alameda, California Monday after a four-month deployment off the west coast of Central America. During her time at sea her crew made two epic busts and almost two dozen smaller ones.

The largest single bust, on July 18, involved a homemade narco submarine packed to the gills with eight tons of cocaine, of which the crew was able to salvage six before the craft sank. This came after the ship had stopped another partially submerged vessel packed with 5,460 pounds of nose candy in June.

In all the big cutter interdicted 23 vessels and crew which brought her total haul to some 34 tons of cocaine worth an estimated $1.01 billion on the street when translated to about 336 million hits of crack.

When you take into account the U.S. population is 318.9 million people, that’s one hit for every man, woman and child, with a few million left over.

Stratton‘s ship’s motto is, “We Can’t Afford Not To.”