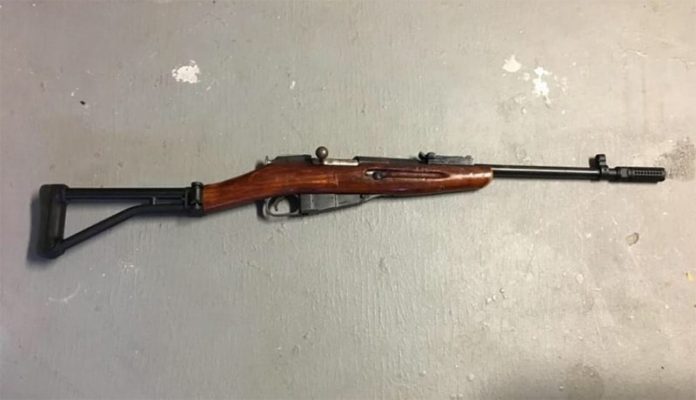 I love guys that customize their guns. The Mosin–Nagant (Russian: Винтовка Мосина) is a favorite of garage gunsmiths because it is plentiful, cheap, rugged, simple to use, and effective. If the Russians had these upgrades in 1917 or in 1942, they could have kicked some serious German ass.

This ancient five-shot, bolt-action, internal magazine–fed,  rifle was developed by the Czar’s Imperial Russian Army in 1882 and is still seen on battlefields today.  Mass-produced by the Russians and their satellites, over 37 million of these rifles have been made, many of them ending up with enthusiastic American artisans.

This example, made by Sdkid99 on Calguns is available for a limited time. WTT means “Want To Trade” FTF means “Face To Face”
WTT Custom Mosin San Diego
Have a custom Mosin I built a few years ago I am looking to trade out.
Has a AK style folding stock and a shortend barrel and new Muzzle & front sight.
Has only been fired 5 times to test the build out at the range.
Also have 200 rounds of 7.65x54R ammo to add to the deal.
Plus original ammo pouch.Let me know what you got to trade. No shipping FTF anywhere in San Diego.

Call now, operators are standing by. You can get your shot at this one of a kind HERE

Hat Tip: the title of this post was directly stolen from Idpapaperoperator on AR15.com.  After I read his comment, I could not think of anything else, much less anything better.