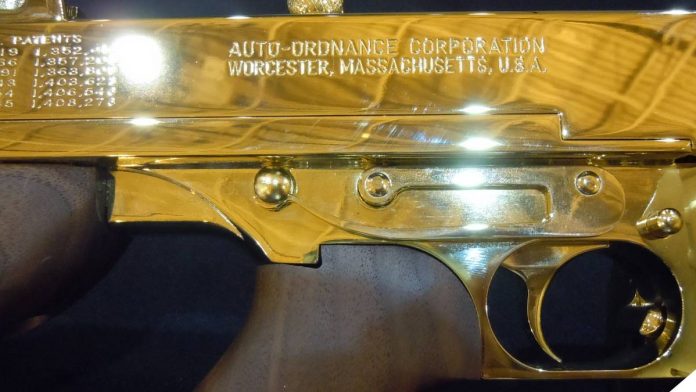 Warren wants to raise the current federal excise tax to 30 percent on firearms and 50 percent on ammunition, a move that she says will both shrink the number sold every year and levy funds for more gun control efforts. (Photo: Chris Eger/Guns.com)

The senior U.S. Senator from Massachusetts lifted the curtain on her sweeping 3,500-word gun control initiative while speaking at Everytown’s “Presidential Gun Sense Forum,” alongside other candidates for the 2020 nomination. Besides the increasingly standard raft of promising to restart the federal assault weapon ban, mandating universal background checks, establishing “red flag laws” and raising the minimum age to purchase guns to 21, Warren promised to move on several other restrictions as well.

“As president, I will immediately take executive action to rein in an out-of-control gun industry — and to hold both gun dealers and manufacturers accountable for the violence promoted by their products,” Warren said.

A big stick the former law school professor promised to bring against the firearms industry is to raise the longstanding Pittman-Robertson Act excise taxes paid by gun and ammunition manufacturers. Since the 1930s-era tax was established, guns made or imported into the country for commercial sale are taxed at 10 percent while ammunition intended for the consumer market is levied at 11 percent. These funds are channeled through the U.S. Fish & Wildlife Service to state conservation agencies in line with the number of hunting licenses to pay for such things as hunter’s education, public shooting ranges, and animal habitat.

“It’s time for Congress to raise those rates — to 30 percent on guns and 50 percent on ammunition — both to reduce new gun and ammunition sales overall and to bring in new federal revenue that we can use for gun violence prevention and enforcement of existing gun laws,” Warren said.

According to the National Shooting Sports Foundation, for the first quarter of 2019, 628 manufactures and importers forked over $155.6 million in Firearms and Ammunition Excise Tax (FAET). Since Pittman-Robertson was enacted, the firearms industry has paid more than $12.5 billion to Uncle Sam in addition to other regulatory taxes and fees.

“Firearms and ammunition manufacturers already pay an excise tax on every rifle, shotgun, handgun and each round produced,” Mark Oliva, director of public affairs with the NSSF, told Guns.com. “That excise tax is what funds conservation. Sen. Warren’s anti-capitalism animus is combining with her disdain of Second Amendment liberties for one of the most anti-businesses and freedom-killing proposals on the campaign trail yet.”

Oliva said that if Warren were serious about addressing crimes committed with firearms, she would insist on bringing up the Federal Firearms Licensee Protection Act which would strengthen penalties for those who commit burglaries and robberies of gun retailers.

“We would encourage the senator to address the criminals who commit the crimes, not the law-abiding gun owners and lawful manufacturers who provide the means to exercise Second Amendment rights,” said Oliva.

Moving past bans, taxes, background checks, and gun seizure laws, Warren promised to quickly move forward with further anti-gun legislation that she would “sign it into law within my first 100 days.” This would include a mandatory one-week waiting period for all firearm purchases and capping gun purchases by individuals to one per month.

Citing the defeat of a renewed federal assault weapons ban and several rounds of rejected expanded background checks proposals due to the inability of Democrats to cough up 60 out of 100 votes in the Senate to overcome a conservative filibuster, Warren said the political procedure would be tossed. A tactic seen in the chamber going back to the 19th Century to block legislation that was not overly popular, the current 60-vote benchmark has been in place since 1975, adopted by the Democrat-controlled 94th Congress who at the time controlled 61 seats.