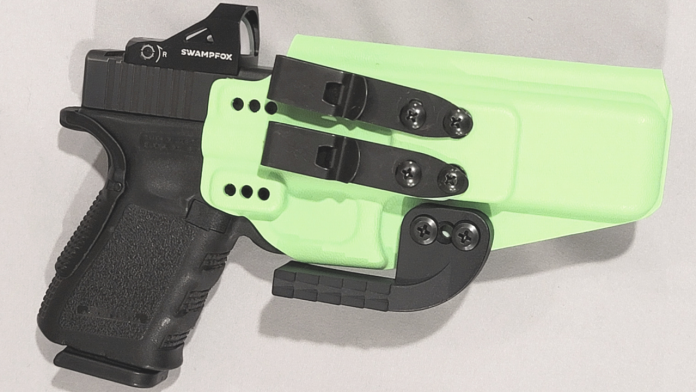 With the advent of the PHLster Enigma, why would anyone ever think about opting for a belt-mounted holster when they need to tuck in a shirt overtop of it? Well, it could be that there isn’t an Enigma-compatible holster for their preferred carry gun, the Enigma isn’t available or in stock, or a litany of other reasons. While the Enigma has become my preferred option for carrying in dress clothes, it’s still important to know how to make a conventional holster work in that role as well.

I started appendix carrying back in 2012, and my first AIWB “holster” really wasn’t. It was the Raven Concealment Systems Vanguard 2 (the original configuration, before they introduced the wing). Holsters are expensive, and I didn’t want to invest a ton of money in this experiment, but $20 was a manageable gamble. Over the span of the last 10 years, I’ve experimented with multiple configurations from various manufacturers, some well-known, and some boutique. Through the course of my trial and error, here’s what I’ve found that works best for me:

I’m not going to go into too much depth on this, because for the purpose of a tuckable holster, it’s arguably the least important part of the equation. Now that’s not to say it doesn’t matter, but as long as it’s from a reputable maker, is of quality construction, has mounting holes low on the body to accept tuckable clips, and is long enough, you can probably make it work for you. My personal litmus test for a holster maker is that they actually train regularly, preferably in the realm of applied violence (i.e. not just square range or competition shooting), or at least solicit input from people in that arena. This is a good indicator that they’ve actually pushed their designs to the point of failure.

As mentioned previously, there have been multiple different attempts in this arena. Most of them have simply been hasty retrofits of existing attachment methods pressed into service on a tuckable platform: Soft loops, j-hooks, over-hooks, and clips of various sizes/shapes have all been tried. The problem is that they are not suitably discreet, and generally look out of place, as can be witnessed in the photos above.

The Ulti-Clip was getting a lot of press and love over the last few years. It kinda works and it’s certainly secure, but I found the camming flap to add an unnecessary level of bulk that creates a bulge behind the belt, and I have some real concerns about the finishing of the edges and the wear & tear it would create on the cover garments.

In my mind there has only been one truly successful solution to this problem: The Discreet Carry Concepts Mod 5.1 – HLR Discreet Gear Clip™ – Behind the belt – SHS clips. Not only are they the lowest profile option, resulting in minimal bulk behind the belt, but they’re amazingly secure. There are numerous reports of these clips surviving the vigorous force-on-force evolutions of ECQC. Here’s a comparison of how the DCC clips look behind the belt compared to the RCS Overhooks. Nothing against the RCS hooks per se. I was pressing them into service in a role for which they weren’t intended. Mostly because I hadn’t discovered the DCC option yet.

One other thing that bears mentioning: For most guns, it behooves you to have 2 attachment points, and to have those 2 points be as far away from each other as possible. This distributes the weight more effectively, as the waist of the trousers is the only thing supporting the weight of the gun. A single point or narrow spacing can result in the clips sagging below the belt, and defeating the purpose of this configuration. Also, the trousers need to fit correctly, which is probably more snug (not tight) than most men are used to. The pants themselves need to offer a certain level of tension to keep everything in place.

No, not that one you basic, alcoholic degenerate.

This should be pretty self-explanatory after Jon’s Concealment Principles video above. The function of the claw is to drive the grip of the pistol in towards the body. This is one you’re going to have to play with to see what combo will work best with your build, holster, belt, etc. The big 3 on the market are the RCS VG Claw, the ModWing, and the Dark Star Gear Dark Wing. I’ve tried all 3. For me, I like the teeth on the Dark Wing. I’ve found that it helps to keep the cover garment tucked in and in place. Some folks don’t find the claw to be necessary. Try it yourself and see what works best.

The wedge serves 2 basic functions: First it helps push the muzzle away from the body and therefore presses the grip of the pistol in towards the body. Secondly, it increases the surface area of the holster that’s pushing against your body, reducing hot spots and discomfort in what Matt Jaques calls “The Lego Principle” (i.e. if a Lego were the size of a loaf of bread, it wouldn’t hurt when you stepped on it. It only hurts because the pressure is applied on such a small area). Again there are 3 basic styles of the wedge. Some holsters like the PHLster Classic and the Tenicor Velo have a wedge molded into the body of the holster itself. I have no personal experience with these types, but based on what I know about the guys that use it in their designs, I can’t imagine it’s anything but effective. Then there’s the rubberized RCS Wedge. Personally I’m not a fan of these because I’ve found that they don’t really have enough give to be comfortable, and they offer a relatively small surface area, unlike the integrated wedges mentioned previously.

My preferred are the squishy wedges, attached with heavy duty velcro. Not only does that method let you adjust the ride height of the wedge, but the little bit of give results in increased comfort over a long period of time (I’ve done an 8 hr drive wearing holsters like this). Keepers Concealment (my other preferred holster manufacturer) makes what they call the “Gabe White Wedge” which is 2” thick at the base, and offers amazing concealment. The only drawback I’ve found is, because of the type of foam they use, it does have to be replaced periodically (~6 months with daily wear for me). Dark Star makes a wedge that I’ve been playing with as well, and it seems to hold up a little bit better over the long term. It’s more expensive up front, but it seems to be slightly more optimal long term solution. Either way you can’t really go wrong.

By now you may have noticed that no one supplier offers everything that goes into my preferred tuckable rig. That’s usually how it goes. You’ll buy an “off the rack” solution, and then play with it for a while. You’ll find something that’s less than ideal for you, and replace it. It’ll either improve things or it won’t. Lots of the guys that are making good holsters today started out because they couldn’t find something that satisfied their exact needs. At the end of the day, what works best for you will probably be a Frankenstein-like amalgam of parts from a couple different sources.

Everything that’s been discussed thus far is built around my default carry pistol, which is a Glock 19. That’s right, I’ve found a way to conceal a full sized handgun in a reasonably effective and discreet method that suits about 85% of the social situations I’ll find myself in. Some folks prefer to opt for a single stack pistol (Glock 48, Sig P365XL, etc). If that works for you (or you just really want an excuse to buy a new toy) go for it.

Hopefully this has proven useful. Like with most gear-related solutions, the most effective answers tend to be more principle-based instead of there being a singular, blanket statement that’ll work for everyone.