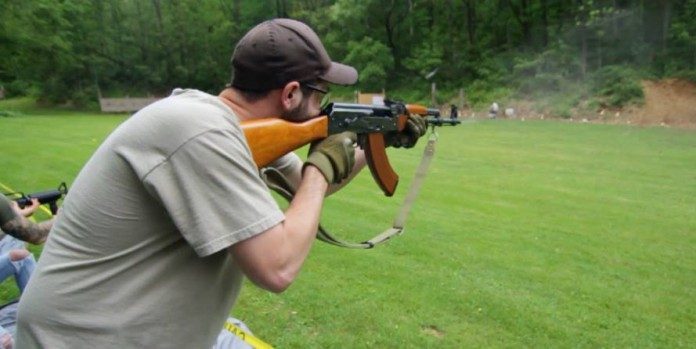 While it is impossible to isolate any particular factor responsible for the increase in interest and ultimately the rise in firearms owners over the past decade, there can be no disputing the number of new shooters has grown. The flocking of new individuals to firearms ownership means that there are plenty of individuals who could use some guidance.

With the influx of new shooters to the community there is a responsibility that all of the more experienced shooters should embrace. Educating those around you. Part of the MASF’s Mission Statement is, in the pertinent part, “strive for responsible firearms ownership by promoting…Education…”

While educating new shooters is a great and certainly encouraged, it is the education of non-shooters that is what will have a profound effect on the view of firearms ownership in not only your state, but also this country. In order to better understand this a little background is necessary.

Firearms were not part of my childhood. While I did own a BB gun, real firearms were not something found in my house or any of my friends. It was not until I spent my first summer down at Camp Horseshoe with my Boy Scout Troop that I ever laid hands on a real firearm. I’ll never forget the smile that crossed my face when I pulled the trigger on that .22 for the first time, as it is still plastered to my face.

When I turned eighteen, I headed down to Dick’s Sporting Goods and bought my first gun, a Remington 870 Express Magnum. It wasn’t long before my parents discovered I had it stashed under my bed and told me to get rid of it. As you might have guessed, I never did get rid of that shotgun.It was not until about seven years later that my father asked me to take him shooting. We had several conversations about guns between the purchase of my shotgun and his request to go shooting and nearly all of them ended with us vehemently disagreeing with the other. I saw a world where individuals were becoming increasingly violent towards one another for no reason, with little respect for human life and sought to protect myself. My father maintained that I would get myself killed by carrying a gun.

I soon learned that my father had spent the last sixty some years of his life without having shot a gun. Yet, despite having never laid hands on one, he had a very strong opinion that guns were unnecessary and only caused problems. In an effort to educate my father, I took him to the range. After going over the basics of safety and the operation of the firearm, my father took his first shot. The same grin I had creep across my face years before began to spread across his.

As the next several months went by, I was asked how to obtain a License to Carry Firearms (LTCF), what guns he should look at and how to care for them. It was through my experience with my father, who was what we would call anti-gun, that I learned education is more than just teaching tactics, drills, how guns work, etc. Education begins with taking someone who is unfamiliar with guns and showing that person guns are simply a tool that have a purpose and can be quite fun when used safely.

In order to preserve firearms rights in the United States and your state, it is important that you educate those around you. How can you do that? Offer to take those around you who have never been shooting before to the range. Let them shoot your guns and ammo for free. Winning the hearts and minds of those who are on the fence or have a baseless opinion is something that has no monetary value.

Start with the basics of firearms safety; explain what the rules of firearm safety are and why they are important. Then show them the firearms you plan on using (I prefer smaller caliber guns to start), explain how they function and let the person you are with familiarize himself or herself before any ammunition is introduced.  After he or she is comfortable with the guns, start the fun!

I’ve found that those who are on the fence or who have even had a negative opinion about firearms have typically not had any experience with them. It is this lack of experience that leads to an uninformed and negative opinion of guns, especially when buttressed by media reports of gun violence and politicians who seem to make it their life’s goal to ban guns.

Education doesn’t stop at the initial introduction. It is likely that the person you took shooting will contact you and ask for help making decisions relating to purchases, should they elect to do so. While most of us have bitterly entrenched ourselves into differing camps as to our preferences, let us not forget, you can give objective advice without touting a particular brand. Of course, we have all had experiences with certain products that were less than stellar and those that are obvious junk should be pointed out.

While working behind the gun counter, I’ve found the most effective way to help someone make a selection is to lay out all of the options available, explain the pros and cons to each option and let that person make the decision as to what suits them best. I’ve helped first time buyers choose the appropriate gun for home defense, concealed carry or just plain target shooting. However, it was the person on the other side of the counter that decided what was best for them, as I had given them the tools to do so.

My challenge to all of you is to take someone who has never been shooting to the range. Go over gun safety, how firearms work and let them shoot. Even if that person doesn’t become a gun owner, you’ve potentially changed their opinion about guns for the better and at the very least, shown them a safe manner to approach firearms, a skill that is invaluable.

BIO – Adam Kraut: Adam Kraut is a freedom loving Pennsylvanian who is a lawyer and the general manager of a gun shop. When he isn’t busy engaged in legal discourse, he can be found behind the counter helping to arm the free world. During his free time, Adam enjoys spending time on the range, volunteering with his old Boy Scout troop and experimenting in the kitchen. Fueled by caffeine, a strong yearning for freedom and the occasional glass of bourbon, he has been known to get snarky with the government at all hours of the evening. You can follow him on the Prince Law Blog.