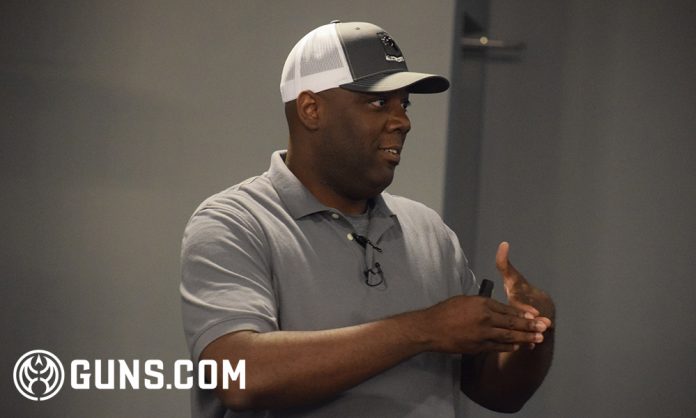 Dickson “Q” Amoah said he started the Chicago-based 761st Gun Club — named after the famed all black tank battalion that fought Nazis on European battlefields during the Second World War — after seeing a swell of black gun owners after the 2016 election.

“The goal of the 761st is we want to change the perception of the black gun owner within the black community,” Amoah said and explained the club serves as a meeting place for African Americans to share knowledge about firearms, firearms law, and issues relevant to the community.

But at the heart of the club is gun education, particularly for local gun ownership. “What we’ve noticed is that people want to be involved with the firearm but they don’t know what the first step is,” he said. “We want to show them what the FOID card is, how you obtain one, and how you take the concealed carry class.”

Dickson “Q” Amoah, president of the 761st Gun Club, speaking at a meeting in July 2018 at a gun store outside Chicago. (Photo: Daniel Terrill/Guns.com)

And members echo that sentiment. “The 761st has helped me learn the laws of the land, taught me how to conceal carry, and just know the rules,” said Costia Harris, the club’s vice president.

Amoah and other members cited volatile race making headlines in recent years. Incidents like the Charleston church shooting in which a white nationalist murdered nine black parishioners with hopes of sparking a race war exemplify their concerns.

With some 130 members, the 761st is small compared to its much larger affiliate, the National African American Gun Association, but the club’s leadership said their proud of their growth. “We grow all the time,” Harris said. “We were just in the process of one of quarterly open houses and these open houses are packed.”