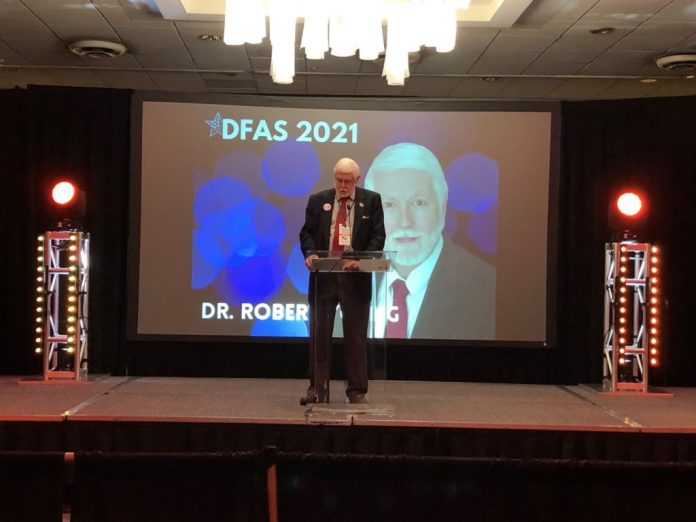 DRGO is a nationwide organization of health care professionals and supporters who value honesty and human rights. Our leadership includes Drs. Arthur Przebinda (Project Director), John Edeen (Membership Director), Sean Brodale (Outreach Director), Dennis Petrocelli (Forensics) and Kevin Zhang (Online Manager). Our Second Amendment activities are all volunteer, as we are all full-time practitioners. We are the doctors who know guns.

For 27 years now, Doctors for Responsible Gun Ownership has been fighting the politicization of gun policy by know-it-alls in our profession. We base our positions on and educate others using the best data-driven science available, which consistently supports the benefit to public health of American citizens exercising their Right to Keep and Bear Arms.

The medical profession at large thinks it knows everything about everything, from Gender Identity to Firearm Safety and now on to Climate Change, all in the name of Public Health. Their problem is they don’t know what they don’t know. Learning how to diagnose & treat illnesses and do surgery qualifies us only in those areas.

Public health interventions have been very important in preventing infectious disease in populations. Such authentic Public Health work has led to far more healthy lives and fewer early deaths than any other human endeavor. Alongside this, developing medical treatments and preventive interventions have saved millions more lives.

So why do doctors want to veer from this ancient, honorable lane?

We don’t. Very few physicians want anything to do with the political goals of their professional organizations. That’s why the American Medical Association now represents less than 20% of American physicians, down from 80% some 50 years ago, when men were men, women were women, and doctors were doctors.

But that leadership has become progressively more . . . “progressive”, as private practice has been mostly replaced by institutionally owned medical practices & physicians having to meet insurance demands to get paid. These pressure providers to meet the agendas of those organizations, not just to do what is best for their patients.

And that, my friends, is the socialist, “progressive” approach of modern medicine.

This goes back a long way. A top official at the Centers for Disease Control in 1989 announced they were “going to systematically build a case that owning firearms causes deaths.”

The head of the CDC in the 1990’s, Mark Rosenberg, said that guns need to be seen as “dirty, deadly—and banned” just like the activism against cigarettes.

He sought [Q] “a long-term campaign, similar to [those for] tobacco use and auto safety, to convince Americans that guns are . . . a public health menace.” Of course, firearms, like automobiles, used as intended harm no one, though cigarettes certainly do.

Leaders of other specialty groups piled on:

The first salvo came in 1993 from Arthur Kellerman and Frederick Rivara, both gun control proponents. Their research, underwritten by the CDC and using questionable statistical methods, claimed that a gun in the home increased residents’ chances of being murdered by 270%!

This is still widely quoted (and even exaggerated) and is a primary example of the contortions that anti-gun researchers employ to scare people. This group looked at homicides in households from only 4 urban counties nationwide then suffering high rates of violent crime. They assessed the presence of guns in the household after the fact, often based only on neighbors’ suspicions, and did not distinguish between guns that were legally owned, illegally possessed, or just left at crime scenes. Not one of the identified firearms could be proven to have been a murder weapon. This is the kind of rubbish that anti-gun studies keep producing.

In 1994, DRGO’s founder, Dr. Timothy Wheeler, testified with other experts before the House Appropriations Subcommittee responsible for funding the CDC. The result was the Dickey Amendment that forbids, not research, but the use of government funding to advocate for gun control, which the CDC was doing.

In 1995, Gary Kleck & Marc Gertz published their seminal paper showing that American gun owners used firearms in self-defense as many as 2.4 million times a year. In 2018, Kleck published a follow-up, having discovered that following his original study, the CDC had surveyed people on the same question in 1996, 1997 & 1998. Along with many other surveys since, the CDC’s confirmed Kleck & Gertz’ original findings. The 2021 National Firearms Survey found nearly 1.7 million episodes of defensive gun uses reported by nearly 1/3 of gun owners.

Oh, and by the way: the CDC never published their findings. One wonders, not too hard, why.

The same cast of characters is still at it. In 2019, Rosenberg was still calling “to appropriate funding for the CDC to restart its gun violence research program.” And Rivara is still churning out anti-gun papers.

Now, current CDC Director Rochelle Walensky wants to fund more gun-related research. She says she’s “not here about gun control. I’m here about preventing gun violence and gun death.” Allowing for her vocabulary mistakes, we certainly hope so. But while she claims she wants to work with gun owners & organizations, none of us have heard from her. Given the CDC’s history; its confusing, frequently contradictory advice about COVID management; and even claiming the power to stop evictions as a “public health” measure, expect this messaging to change capriciously.

Many of us recall the “assault weapon ban” of 1994-2004. Since then, the DoJ’s Justice Institute, the FBI, the National Academy of Sciences, the liberal Rand Institute and others have concluded there was no good evidence that it had decreased suicide, accidental shootings, mass shootings or violent crime one iota. Yet the civilian disarmament complex wants to ban them again.

That was all true.

But their own data also showed that “gun homicides” in Missouri had already been increasing, then did so at a slower rate following the change. Similarly, Connecticut’s “gun homicides” were already dropping, but did so more slowly than before its change.

But several years ago, the truth came out.

In 2018, a surprising result kiboshed the notion that background checks reduce violence. From the University of California-Davis, ordinarily anti-gun Garen Wintemute’s group reviewed decades of California’s comprehensive background checks, the most rigorous in the nation, and found they had NO effect on rates of firearm homicide or suicide.

And in 2019, DRGO member Mark Hamill’s study was published showing that nationwide, state-level  concealed carry laws did not correlate at all with differences in homicide or violent crime rates.

So why all the cries for “universal background checks” and the fear of citizens bearing arms? Quality research has demonstrated conclusively that gun ownership in America is good for public health.

The best work comes from criminologists (Kleck, Gary Mauser, and others) and economists—such as my colleague Dr. John Lott, Jr. whose Crime Prevention Research Center has done more to document the safety and utility of civilian gun use than anyone. We need to keep that coming.

Science is not a definitive oracle. It is a process that requires fair minds, openness to criticism, and the ability to change beliefs as research yields contrary data. These abilities seem sorely absent in most of the gun control industry.

Careers depend on getting funding from the Bloombergs, Soros’s; their allied schools, foundations and organizations; and the government—none of which value individual responsibility.

It doesn’t take a graduate degree or statistical expertise to see the faults in advocacy research. You’ll find:

Finally, don’t let disputes among so-called “experts” distract you. The truth is out there. Without any reasonable doubt, the facts are on the side of liberty and individual responsibility.

The foundation of our great American right to Keep and Bear Arms is not science anyway, but principle. We have the inherent responsibility to defend ourselves and our loved ones, and are entitled to arm ourselves with the tools that enable us to do so, wherever & whenever.