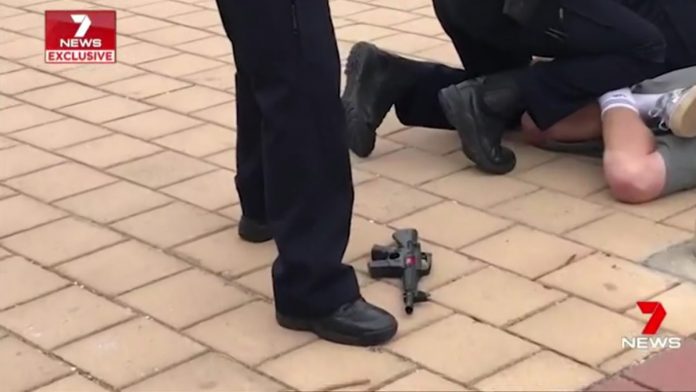 A man taking a stroll with a toy gun was not met with a warm reception by Australian police.

Seven News Adelaide reports the Feb. 10 interaction between a man and South Australian police in the coastal suburb of Brighton in which four officers can be seen detaining the subject, who is face down on the sidewalk, a miniature AR-15 facsimile cast aside.

“Police swooped after receiving reports the man was armed with a rifle,” said the reporter. “The so-called weapon, a replica.” The 34-year-old unidentified man was taken to a mental health center.

Australian gun laws don’t just come down hard on actual firearms. While possession of some replica guns is generally allowed, most Australian states ban airsoft guns as well as replicas that outwardly resemble anything that is capable of automatic or select-fire. Police in Adelaide last August arrested a local man over the illegal importation of airsoft and imitation handguns.