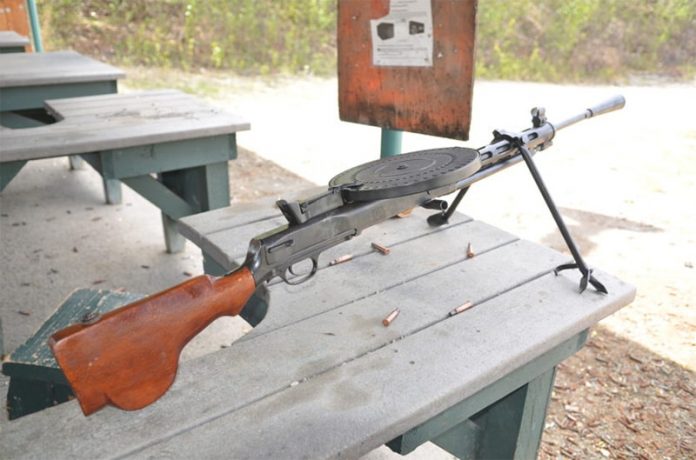 Shortly after the Communists were victorious in their revolution and ousting of Tsar Nicholas II of Russia, they set to strengthen their armed forces. The problems with Imperial Russian military thinking became obvious to the Soviets after they suffered more than 5 million casualties in World War One. The Russian’s only machine gun available at that time was the Maxim machine gun. The Maxim, while revolutionary in design, was problematic for several reasons. Chiefly, it wasn’t very portable and water-cooled, meaning the outside jacket of the weapon had to be refilled with clean water in order to prevent malfunctions.

That all changed in 1927 when Soviet weapons engineer Vasily Alekseyevich Degtyaryov submitted his prototype for what is commonly refer to as the DP-28 Light Machine Gun. His new design was exactly what the Red Army was looking for – a highly portable machine gun to serve in support of Infantry attacks. The new machine gun was made by the thousands at the V.A. Degtyarev Weapons Plant located in Kovrov, Russia. The city of Kovrov is located 166 miles East of Moscow, a location far enough behind Russian defenses that it allowed the plant to safely continue production of these guns even at the height of Operation Barbarossa – the Nazi invasion of Russia

The apparent trademark of Soviet engineering is: if something is worth being built, it’s worth being overbuilt with as few parts as possible, and it must be able to function in terrible conditions. This thought process is evident in almost every Russian/Soviet design that I can think of, and it’s particularly prevalent in the DP-28. Comprised of less than 80 total parts, the machine gun was renowned for being able to function effectively in dirt, sand, and snow. The new machine gun, as well as being rugged and dependable, fired the same 7.62x54R cartridge as the standard issue Soviet rifle, the Mosin Nagant. In my opinion, this was an idea the Soviets borrowed from their World War One allies. The British and American forces both had light machine guns that fired the same cartridge as their main battle rifle.

Since it’s only available as a fully automatic weapon, the DP-28 isn’t a weapon that most readers will see at the range on the weekends. In the United States, thanks to laws such as the National Firearms Act and the Firearms Owners Protection Act of 1986, civilian ownership of machine guns is increasingly rare, and very expensive. That doesn’t mean they can’t be owned it’s just a matter of doing paperwork and procedure. If you are a firearms manufacturer with a BATFE Class 02/07 license, you can apply and build your own machine guns. OR  you can be lucky enough to have a friend with one. I am fortunate to be friends with James Foley of Arctic Arms, and he was kind enough to let us put some rounds down range with a 1944 produced DP-28. This trip to the range also afforded me the opportunity to ask him questions about its strengths and weaknesses. 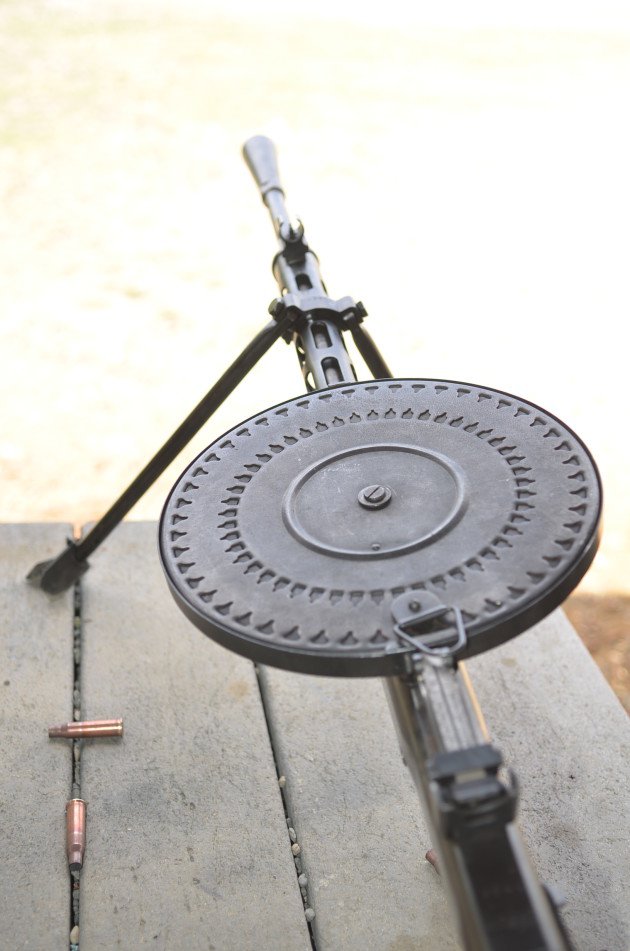 The DP-28 is a large and imposing piece of military hardware. It is purposely built to destroy targets no matter if it’s paper, a piece of scrap steel, a car, or a German bunker. That fact becomes obvious the first time a person inspects and handles the weapon. When I first got to the range with James, we went over the history of his particular DP-28. He shared his on and off again issues with the recoil springs, which I learned was one area on a DP-28 that can be problematic. The recoil spring is located under the barrel and can lose its temper and ability to compress fully due to overheating.

After defeating the steel Soviet tuna can shaped ammunition container, with the help of a can opener, I began to load the 47 round drum. I quickly found out that it’s an awkward pain in the ass procedure. The magazine pan has a ring on the outside to rotate one half of the magazine while you feed rounds into it from the other side. It all sounds easy until you are trying to hold the steel pizza pan against your torso, turning the coil spring via the ring, and simultaneously loading rounds into the opposite side of the drum. Luckily, James is well versed in this procedure and we got everything squared away in short order. 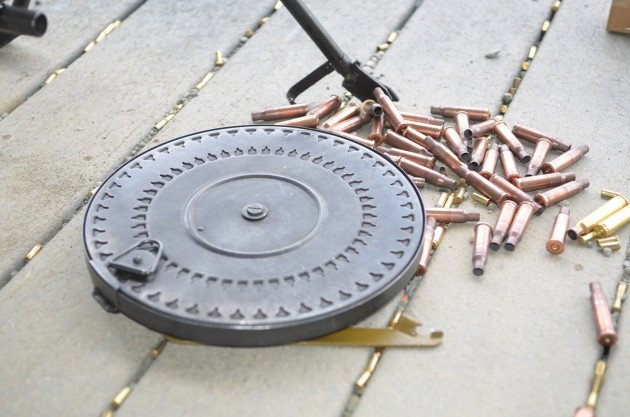 James took the lead to demonstrate the manual of arms for the DP-28, then ran through the first forty-seven rounds of the day. While watching the first rounds pour downrange, I thought it was odd to see the ejection of spent shells from the bottom, since most machine guns I have fired feature side ejection ports. You can also notice the top of the magazine pan turning as it unloads rounds. This makes sense when you stop and think about how the gun is operating, but it’s interesting to see a magazine uncoil. This was my first experience with pan-fed machine guns.

When it was my turn to fire the DP-28, I readied myself behind the twenty pound Bolshevik blaster, loaded a fresh drum into the feed lips, and secured it. Racking the bolt, I gripped the machine gun, and placed my support hand in the proper position. I squeezed the trigger, and expecting a loud BOOM, heard only a deafening SILENCE. Nothing. Just silence. I thought “I must have the safety on”, it was then that James said “Oh yeah, it has a grip safety”.

Someone once told me: “If in doubt at all, ask questions” . Well this was one time I didn’t ask enough questions. There I was, one second feeling like a bad ass, the next second feeling like a stupid crayon eater. Once I solved the enigma of the grip safety, I tried to squeeze off short 3-5 round bursts at the target down range. To my surprise the recoil wasn’t as terrible as I had expected, and, with a much slower cyclic rate than other machine guns, it was easier to keep the bursts short and conserve rounds. I have fired other weapons that use the 7.62 x 54R cartridge and they seemed to have a more pronounced recoil than the DP-28. The concussion from firing short bursts was also less than I had anticipated.

That afternoon we went through six pans of ammo, firing it in alternating short and long bursts, with very few stoppages. The fact we used old Soviet corrosive ammo straight from the can with few problems, speaks volumes about this 71-year-old machine gun and the Soviets method of sealing the ammunition cans. Due to the bottom ejection of spent rounds I found it refreshing to not have hot brass raining down on my head. At my local range, when shooting guns that eject spent rounds from the top or side, they tend to bounce off the ceiling and rafters of the covered shooting lanes. 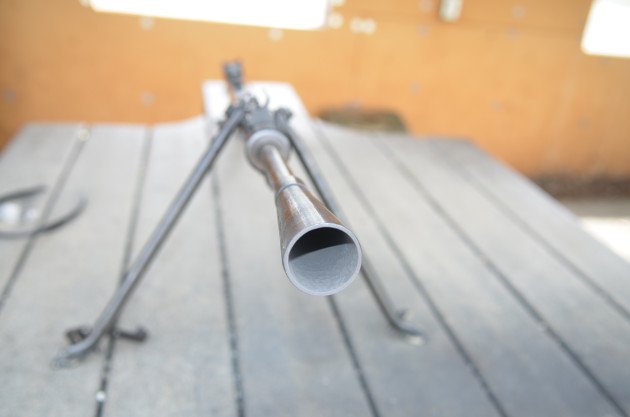 The DP-28 served the Soviet Union and its Warsaw Pact allies for nearly 40 years as their main infantry light machine gun. It’s ability to perform well under extreme conditions and ease of maintenance extended its lifespan in spite of the bi-pod being its weakest point. Starting in 1961 the DP-28 slowly was replaced by the PK-M, medium machine gun. Although removed from front line service, the DP-28 has been captured in the hands of Taliban fighters in Afghanistan as late as 2012, and was often seen in the hands of revolutionaries in both the Libyan and Syrian Civil Wars.