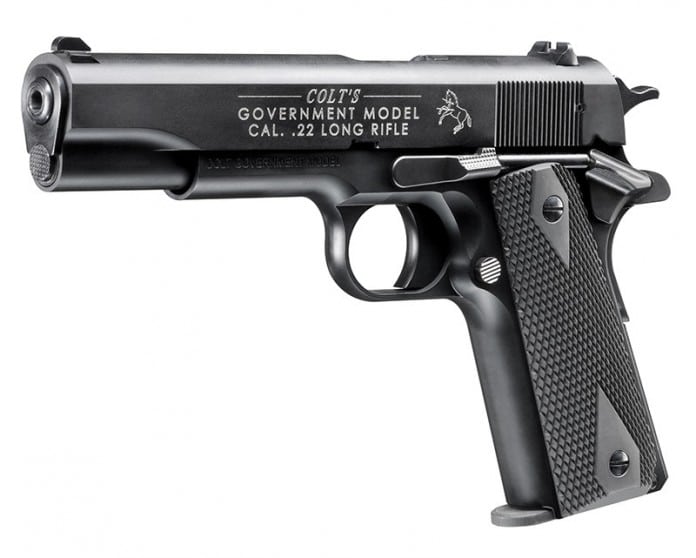 Though rifles, carbines and submachine guns seem to get most of the spotlight when talking tactical .22s, there is no shortage of rimfire pistols on the market.

The Colt Government 1911 A1 .22LR Rimfire, built under license by Walther Arms, is a tactical .22 recreation of the classic 1911 service pistol carried by U.S. troops for decades. It has a 5-inch barrel, manual thumb safety, grip safety, disconnector and standard 1911-style field stripping. It also has a removable, drift-adjustable front sight and a threaded muzzle. A Rail Gun model takes the classic design and adds an under-barrel rail for modern accessories.

Walther Arms, however, is perfectly capable of building tactical .22s that aren’t replicas of guns from other manufacturers. The Walther P22 was designed by taking the styling, ergonomics and performance features of Walther’s centerfire handgun line and adapting them to a rimfire pistol with a definite tactical look. The P22 has a 3.42-inch threaded barrel, DA/SA trigger, paddle-style ambidextrous mag release, front and rear slide serrations and an accessory rail. It’s available in black, nickel and military tan. P22 Target models are also available with 5-inch barrels in black and nickel. All P22 models have 10-round magazines with or without extended finger rests for larger hands.

The new M&P22 Compact from Smith & Wesson was developed by taking a full-size M&P frame and shrinking it 15 percent, retaining the standard tactical rail and the features that make the M&P line so popular. It has a 3.56-inch threaded carbon steel barrel, ambidextrous safety, reversible magazine release and single-action internal hammer operation. It has an overall length of 6.65 inches and weighs only 15.3 ounces without a mag. Perfect for concealment and small hands, the M&P22 Compact comes with two 10-round magazines.

With so many famous guns from today and yesterday getting tactical .22 clones, it should be no surprise that the legendary UZI has its own .22 sibling. Another licensed replica from Walther Arms, the UZI Pistol recreates the gun used originally by Israeli Defense Forces in the 1950s and widely by military forces and personal security professionals ever since. The UZI Pistol has a 5-inch barrel with a threaded muzzle, metal receiver, adjustable front and rear sights, grip safety, and a 20-round magazine. It has a short tactical accessory rail under the barrel and a topside charging handle.

With AR pistols so popular these days, it’s no surprise to find tactical .22 AR pistol models available. Mossberg’s 715P is the pistol model of its 715T rimfire rifle line. The 715P has a 6-inch blued barrel with an A2-style flash hider, a full-length top accessory rail with rail-mounted front and rear sights, side charging handle, and 25-round magazine with full-profile 10-round mags available for restricted jurisdictions. It is available in black or in Duck Commander Realtree Max-5 camo with engraved Duck Commander logo.