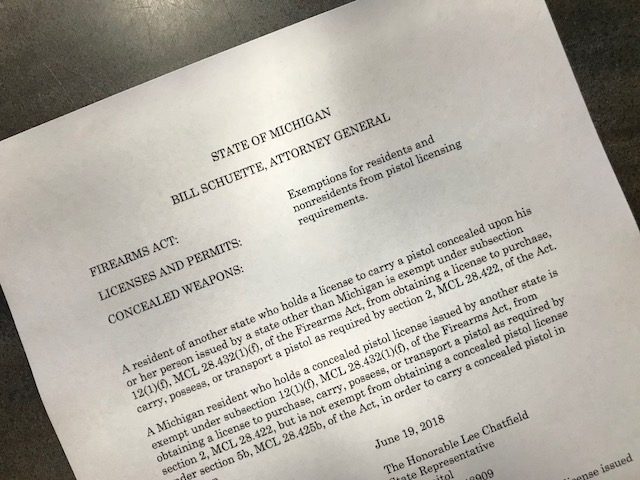 Does the thought of being required to register your guns with the government send shivers down your spine?

Do you worry about them coming for your guns?

For decades residents of Michigan have been required by law to turn in a pistol sales record/registration form for every handgun to their local police jurisdiction within 10 days of sale.  Residents who inherited a handgun or moved from another state are also required under Michigan law to fill out and submit the pistol sales/registration form.  The local police enter the information for the handgun and the owner into a database run by the Michigan State Police. Although this law applies to Michigan residents there is an exemption in the law that allows anyone with an out of state concealed carry license to not have their firearm registered in Michigan while in Michigan. The intent of this was eliminate the need for visitors to our state from registering their guns while they were here on vacation.

This exemption has caused some controversy over the years Michigan residents felt it should also apply to them if they were to get a non-resident permit from any other state.

If you were one of those residents who felt this exemption applied to you and eliminated your requirement to register your handguns you were somewhat of a guinea pig in our legal system.

Unfortunately it depends on what judge you get as to how your particular case would be treated. Our legal system isn’t perfect, our laws can be interpreted differently by different people. So for those of you who chose to follow the letter of the law and get your non-resident license from out of state you just hit the legal jackpot.

Michigan’s Attorney General made it official last week with AG Opinion 7304.  No more wondering if your non registered firearm is actually legal or not.  If your one of the millions of handgun owners in Michigan and you want to use the latest AG Opinion to exercise your rights and not register for handguns, you will need to get a concealed pistol license from another state.  You must have the actual license to be legal.  A quick online search will provide you with a list of states that will issue a non resident permit.  One of the easiest is New Hampshire. 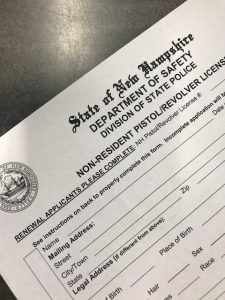 They have a short two page application, and a fee of $100.  Their processing time is 14 days and its valid for 5 years.  Of course there are many others, I chose New Hampshire because no training was involved and it is valid for 5 years.

One question that will arise is “why would someone not want their handguns registered?”

First of all only 8 states require some type of firearm registration.  The purpose of registration, or in Michigan the requirement to get a license to purchase a handgun, was to help in fighting crime.  Our legislators felt it would be easier to track stolen guns and return them to their rightful owners. If a gun was found at the scene of a crime the owner could be easily identified.

According to the Bureau of Justice half of all illegally trafficked guns originate from straw purchases where someone buys the firearm for someone else.  Someone who is committing a crime is not going to register or get a license to purchase.  With only 8 states having some type of registration that means that any stolen guns from the other 42 states will not be in their states computer systems. Even more this permitting does nothing to assist in battling straw purchasing as the registry, if completed at all, will be falsified.

Secondly Ronald Reagan signed the Firearms Owners Protection Act making a national database illegal. While many people feel they have nothing to hide, thus have no issue registering their handgun, the most popular view is that registration process can be a hassle; long guns are not required to be registered why should handgun registration be required.

There can further be issues at the county or city level of the registration process.   A close friend received a letter in the mail from his local jurisdiction saying there was an issue with the serial number on the Taurus revolver he was attempting to register.  He does not own a Taurus revolver so we took a drive to the city police department.  Apparently they had just fired a clerk, and after going through her desk found thousands of registrations that were never entered into the system. Did they notify people? No, they decided to enter them in the system. My buddy had owned a Taurus revolver several years ago but sold it a while back. Had it not been for a mistake on the registration form it would have been re-registered under his name without his knowledge. What if that gun were then used and left at a crime scene? They would have traced it back to him.

Michigan’s gun groups have been working for years to get the registration system eliminated, however our legislators have been slow to act on every proposal brought to them.  With Opinion 7304 Michigan residents now have a legal way with a little paperwork, a hundred bucks, and a little patience to exempt themselves from the pitfalls of Michigan’s registration system.

Is this the beginning of the end of handgun registration in Michigan?

Possibly, with the legal requirement to register now only covering those who do not want to become exempt Michigan’s registration system is going to be even more incomplete with spotty information. Do your due diligence, if your going to apply for an out of state licence find the one that works best for you, and be aware you still need a Michigan concealed pistol license if your going to carry concealed.