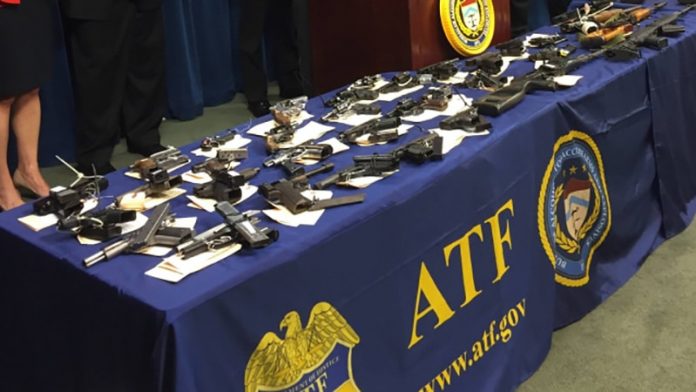 A report released this week by the U.S. Department of Justice’s Office of Inspector General found that undercover shops set up by the Bureau of Alcohol, Tobacco, Firearms and Explosives have a number of issues and inconsistencies.

In their 112-page report, the OIG stressed that other federal agencies such as the FBI rarely use undercover storefronts while others, for example the DEA, never utilize the tactic. The report goes on to contend that, since storefronts are open to the public, their use can be seen by some as “trolling” for low-level offenders and forwarding cases that do not have a substantial federal interest, noting that the FBI considers such operations as a “crude tool.”

Further, the report called out the ATF for insufficient training and guidance in storefront operations they evaluated, as well as an inconsistent approach to how the agency interacted with juveniles, confidential informants with ongoing criminal violations, and those with disabilities.

After spending $245,000 in a nine-month operation, agents purchased 243 firearms, including 7 illegal short-barrel shotguns and 7 firearms with obliterated serial numbers, as well as less than a pound each of cocaine, and methamphetamine. When it came to file charges, the U.S. Attorney was able to get plea agreements in federal court with 47 defendants, most of whom had prior felony convictions or arrests for a violent crime, and were gang members. However, prosecutors told OIG that many of the cases were “marginal” with 20 defendants receiving sentences of a year or less or probation.

In association with the Escambia County Sheriff’s office, the ATF set up a second-hand store selling used electronics and clothes for nine months in 2011 while spreading the word in the community that the store was looking to purchase firearms with “no questions asked” for resell abroad. In the end, the operation purchased 260 firearms including 11 from a 16-year old and others from an individual “on the breakpoint of Borderline Mental Retardation and Mental Retardation.”

The ESCO undercover officer described an interaction with the defendant:

A young guy, always came in there with his fiancée or his parents. I don’t remember thinking that he was mentally challenged. I remember thinking that he was really, really on pills. When you talk to somebody that’s on pills, and I mean, you can just see it. He couldn’t hardly, you know, I don’t think it was his mental capability where he couldn’t hold himself up. It was his drug addiction, really high all the time. I mean, nose running, you know, stuff like that. Now, as far as how he was, you know, as far as IQ, I wouldn’t be able to tell you. But he didn’t seem mentally challenged to me.

An agent with the operation told OIG that if juveniles had been prohibited from the operation, it would have limited the storefront’s effectiveness.

In the end, charges were brought against 77 defendants in federal and state court with four charged exclusively with selling firearms to a felon– a confidential informant employed at the shop. The CI used in the operation was later arrested after brandishing a weapon during a dispute in Fort Walton Beach, Florida and sentenced to six months in prison.

Over a seven-month period in 2012, the ATF set up and ran a storefront in a high crime area of Milwaukee. The FBI helped run the shop for a few weeks until agents voiced a number of concerns about the operation’s tactical planning and security, which ultimately led to the Bureau leaving the sting.

In the end, the sting garnered 144 firearms as well as some drugs and stolen property. However, among those prosecuted was a defendant who was later was diagnosed as “mildly mentally retarded” who agents told OIG appeared “lonely” and considered the undercover agents at the storefront his “friends.” Paid to distribute flyers for the store for $10, the defendant set up at least 10 buys between agents and associates of his besides selling guns and drugs to them himself.

The store made local news after three ATF -issued firearms were stolen from a government-owned SUV, including an M-4 .223 caliber rifle, parked in front of the shop. A subsequent burglary of the shop incurred losses of $39,000 in property including an ATF tactical ballistic shield, which was later found in an alley and recovered.

In all, prosecutors went after 46 defendants in relation to the guns and drugs sold to the undercover agents, though three cases were dismissed over mistaken identification by the agents, including one individual who was in jail at the time of the alleged crime.

A 2013 review by the ATF’s Office of Professional Responsibility and Security Operations ordered by then-Director B. Todd Jones after attention was drawn to the sting by media reports found that management, staffing and security were deficient in the operation and led to led to one supervisor being issued a letter of reprimand and five other individuals being issued memoranda of caution.

For the first six months of 2013, the ATF operated a tattoo parlor about 600 yards from the Boys and Girls Club of Greater St. Louis and drew from lessons learned in Operation Fearless in Milwaukee. With a strict policy of refusing access to the store to juveniles, the sting spent $260,000 to purchase 129 firearms as well as a significant amount of heroin and smaller quantities of other drugs. The federal government brought 25 defendants up on charges and obtained convictions in each case.

The CI used at the shop as a tattoo artist had allegedly on a prior operation bought and used illegal drugs, engaged with prostitutes and told others he was working with law enforcement.

For nearly a year over 2012-2013 with breaks for extreme weather, the agency ran a mobile storefront out of a van in the Brockton and New Bedford, Massachusetts area south of Boston. Equipped with a GPS tracker and kill switch so the vehicle could be tracked and disabled if needed, agents stocked a leased a cargo van with cigarettes and shoes seized in other law enforcement operations.

OIG found that the van had been parked on at least one occasion near a school but that if children approached the van they were encouraged by agents to leave. In all, the operation produced few guns, with just four recovered along with small amounts of drugs and prescription pills, for which agents paid $24,000. The U.S. Attorney declined to prosecute any of the suspects in the sting, though a state court did indict one on firearms and narcotics charges, for which they received 6 to 7 years.

A supervisor told the OIG the program premise was flawed, saying, ““the likelihood of bumping into an individual that just happens to be walking down the street as you’re selling product out of the back of a van that’s willing to trade you a gun for sneakers is nil.”

In closing, the OIG made a series of 13 recommendations in their report, stressing that the ATF should move to standardize their undercover storefront operations, use agents with prior experience in such operations to help set them up, trace recovered firearms as early as possible, conduct follow-up investigations for leads generated and expand training and oversight. In addition, they placed emphasis on appropriate interactions with juveniles and those with disabilities, while falling short of condemning actions by agents in past storefront operations.

In response to the OIG’s draft report, ATF Deputy Director Thomas E. Brandon noted the five cases studied resulted in the interdiction of 780 firearms and recommended 120 defendants for federal prosecution, which he argued was effective.

“Operations that directly benefit public safety, either predicated or broadly-targeted, should not be considered a ‘crude tool’ of law enforcement,” wrote Brandon.