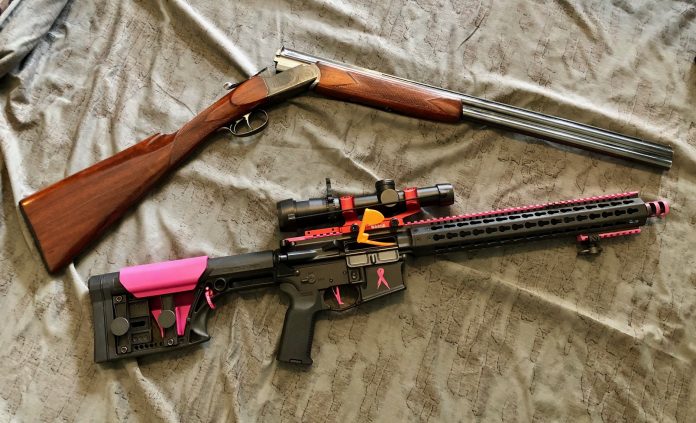 It seems that after every high-profile shooting, amidst the inevitable calls for more gun control, there are always the voices which chime in saying “I’m an NRA member, BUT”, or “I shoot [fill in the blank] BUT”, or “I grew up around guns, BUT”.

We have all seen them. They might even be friends or relatives. Let’s call these people “But”-heads, shall we? I have yet to hear one of these “But”-type arguments use enough logic or fact, only ignorance and emotion, to merit consideration. These people are willing to sacrifice to the gods of gun control whatever doesn’t fit into their particular life experience. As long as “their” chosen activity isn’t impacted, they are fine with throwing everyone else’s rights under the bus. At its core this is virtue-signaling, ignorance, and betrayal.

An example from a few years ago would be when Senator Joe Manchin (D-WV) famously touted his NRA membership in a 2010 campaign ad.

But then he came out against “high capacity magazines”, saying that he’d “never had more than 3 rounds in a clip”, and “Didn’t know anyone who goes out [hunting] with an assault rifle”.   https://www.cbsnews.com/news/pro-gun-sen-joe-manchin-calls-for-action-on-gun-violence/

A more recent example of a But-head is professional baseball player and bowhunter Chipper Jones, who in the wake of the Parkland shooting denounced “assault rifles” as “belong[ing] in the hands of soldiers”.   https://www.myajc.com/blog/jeff-schultz/chipper-jones-avid-hunter-denounces-assault-weapons/65HvYylsfsLgAq7FePpvFJ/

The CEO of Dick’s Sporting Goods recently showed himself to be a But-head as well.

“We’re staunch supporters of the 2nd Amendment. I’m a gun owner myself,” Stack said. “We’ve just decided that based on what’s happened with these guns, we don’t want to be a part of this story and we’ve eliminated these guns permanently.”  http://abcnews.go.com/GMA/News/dicks-sporting-goods-ceo-company-longer-sell-assault/story?id=53403284

It’s even possible to be “former military” and still be a But-head. Take a look at this video from CNN, featuring a retired general, who helped give us the term “fully semi-automatic” https://www.cnn.com/videos/us/2018/02/27/ar-15s-up-close-tuchman-dnt-ac.cnn

Another term for these sorts is “Fudd”. As in the cartoon character with the speech impediment, Elmer Fudd.

But-heads, (or Fudds) are people who truly do not understand the Second Amendment or the reason it exists. They cannot process that it’s not about hunting. It’s not even truly about self-defense except in the broadest possible terms. It’s about defense against government run amok.

“The beauty of the Second Amendment is that it will not be needed until they try to take it.” – Attributed to Thomas Jefferson

These people don’t even understand how semi-automatic firearms operate or what the “scary parts” of an AR-15 are for. If they did we wouldn’t be hearing all the nonsense we do about “weapons of war”. I’d wager that if you showed any of these people a photo of an M1 Garand and asked if it was a “weapon of war” they would tell you no. Which is nonsense because the M1, being the WWII icon that it is, is a true weapon of war. It is even semi-automatic. But the M1 Garand is made of comforting wood and doesn’t have scary looking plastic accessories so it elicits no emotional knee-jerk response.

For those who would argue that the Founders never intended for “military style” arms like AR-15’s to be held in private hands I would like to point out that the Founders very much intended private hands to hold “military style” arms of many varieties. Not only did citizens use whatever arms they had on hand to fight the British (thus making almost any weapon a “military” one) the Founders even provided for the government to authorize letters of marque, which allowed private ships (armed with CANNONS) to operate as privateers. That’s correct private warships, Elon Musk and Joe the Plumber with an aircraft carrier. I think cannons could be safely called “military arms”, no matter how you choose to slice it. The Founders knew exactly what they were doing and trusted their own citizens far more than anyone gives them credit for.

The But-heads divide us. They seek to draw lines of virtue between themselves and other firearms owners. They seek to paint themselves as “reasonable” to those who would trample our constitutional freedoms. But what they don’t understand is that there is no such thing as “reasonable” when it comes to gun-grabbers. They are playing the long game. They seek to peel us off from one another, one group at a time. If they are successful in a grab for semi-autos, they won’t stop there and simply leave the But-heads in peace with their nice “reasonable” bird guns and bolt-action rifles. The grabbers won’t rest until all firearms are gone from citizen’s hands. Except for the criminals of course. Additionally the “criminals” who have been artificially created by noncompliance with unconstitutional laws. (See the whopping 96% noncompliance rate with the SAFE act.)  https://hudsonvalleyone.com/2016/07/07/massive-noncompliance-with-safe-act/

The Second Amendment is about single-shot chipmunk .22’s and AR’s with 30, 40, or more round magazines. It is about pump shotguns and semi-autos with magazine tubes longer than the barrel. It is about revolvers and AR-pistols. It’s about wing shooters and 3-Gunners, hunters and concealed carriers, plinkers and competitors, muzzleloaders and the tacticool. The 2A is for ALL of us, and for all of our protection.

There is no “BUT” in the Second Amendment.