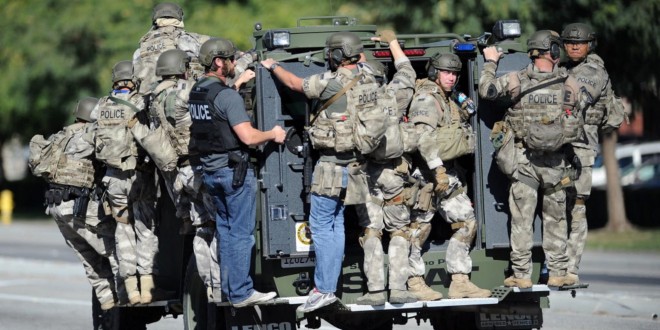 Yesterday the US faced its deadliest mass shooting since Sandy Hook. Gun control advocates like Hillary Clinton and Pres Obama wasted no time demanding stricter gun control before any facts have been available.  Gun rights groups took to their podiums to declare that California is the gun control capital of the US, and this proves gun control does not work.

As the dust has settled and the blood of the attackers now stains the earth more facts come to the forefront. Since it is not white Christian NRA members, the right has moved the narrative away from the talk of middle east terrorism and instead to workplace violence. The absurdity of this claim is only second to the fact the media is propagating this story.

According to official reports we know one of the gunman was at a Christmas party, got angry and left. He comes back later and opens fire on the occupants and leaves. He then goes back to his home and pursued by police. All of that fits the narrative of workplace violence. If you planned an attack, you likely would not go back home.

However, that narrative starts to change now that more info has come out. The first damning item is the fact that the husband and wife team dropped their daughter off due to a “doctor visit” with a family member earlier that day.

Next comes the items used in the attack. Here is where the gun control and workplace violence narrative is completely shredded.

Let’s take away the amount of ammo in the home. I know many of my regular readers likely have the same, and that does not indicate you’re a threat.

Pipe bombs are not something you put together quickly. Certainly not in 10 minutes. With 15 total pipe bombs in play here between the center and the home with remote detonators your not talking about hours of work, it’s likely days of work. This indicates premeditated attacks.

Also, there is the new dreaded assault clothing. I am royally screwed if they are going to start requiring permits for 5.11 pants and wolf gray shirts (not saying that’s what they wore I am not sure from the pics). I’m going to assume the perp changed into that before returning and was not dressed as such at the party. I wonder how many workplace violence incidents start with a wardrobe change.

When this all is added up together, it makes a strong case that this was not workplace violence and, in fact, was an act of terrorism.

As for Gun Control, the details are still a bit sketchy. The news is reporting that the guns used were legally purchased though not by the perps. So to say they were legally purchased is a flat out lie. They would be straw purchased at best which last time I checked is illegal. So let’s see what would have stopped this from the minds of gun control advocates:

Background Checks: Not going to help since there was one and no red flags. Further, the gun would have been illegally transferred to the perps skirting any background check that could be done.

Gun Bans: Nope because AR-15’s are already on the California banned weapons list. Lets also not forget the 15 pipe bombs made at home that did not require any form of background check and are completely illegal in every state. It’s time we enact common sense pipe control now. Only a plumber needs that much pipe and home Depot is clearly a dealer in the mass murder who needs to be boycotted. (Sarcasm for those of you incapable of seeing it)

Ammo Limits: 65 rounds killed 14 and injured 17 more. Most people who go to a range for an hour expend more than that so limiting purchases would not have done anything to reduce the damage done.

More Gun Free Zones: This event like most mass shootings occurred in a gun free zone. Gun free zones have been proven to be soft targets for criminals and only serve to endanger the people in them.

These degenerates brought illegally acquired guns on a gun free property and mass murdered people. They broke countless laws and likely did such with the knowledge they would die before being brought to justice. When you are dealing with a person willing to take his or her life, there is no penalty that can be used to dissuade them. Regardless of motive be it fame, religion or mental illness these individuals made a consented effort to plan and execute an attack on unarmed and innocent humans with no regard for any laws or consequences that would get in the way.

This is the type of war Israel has fought for years as well as what England endured at the hands of the IRA. The only defense is a vigilant populous willing to defend those around them as well as militarized police armed with the proper tools to stop a threat quickly. If we are going to have a serious discussion of gun control in this country, then let’s do so. Controlling people’s actions is bad policy. It hasn’t worked with the war on drugs nor has it curbed the epidemic of obesity in the country. Bloomberg will be no more successful enacting gun control than he was enacting portion control in NYC. The key is not control, it’s stopping the issue. The only way to stop the issue is to have people everywhere trained and willing to end the life of those who would harm others. The best way to do that is to remove these nonworking gun free zone policy’s and ridiculous restrictions on what guns can and can not be owned so that responsible people can defend themselves and those around them.

The only way to achieve this is through intelligent discussion and education of those who are fearful and want an easy solution that does not get their hands dirty. Take these points and share them on your Facebook feed. Stand up for what you believe in and do not let negative pressure from anti-gun “friends and family” dissuade you from being heard. Own and carry a gun and educate those around you on why you do. Vote every election for those who believe in your right to self-defense.

I hope this article if nothing else helps a few who have been to scared before to voice the idiocy of gun free zones and helps shed light on the only solution that can work to curb senseless violence.