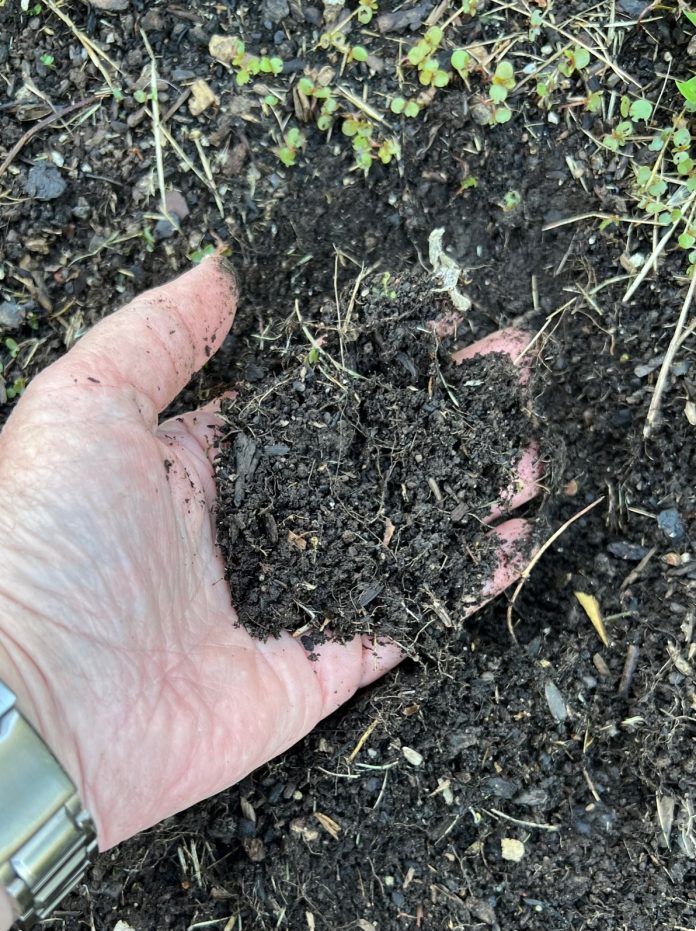 I joke a lot about needing “dirt therapy”. I’ve noticed over time that digging in the dirt, planting in my garden, even walking in the woods  all improve my mood. Does anybody besides me love the smell of damp earth? The smell after a rain, the smell of digging in the dirt, the smell of the hunting woods – does it give you a boost of happiness? I don’t know about you, but when I open the screen door in the spring and step out onto the deck, that first deep breath of spring air in the morning gives me a relaxing “Ahhhhh” feeling.

I even distinctly remember the smell of my dad’s hunting clothes when I got a kiss goodnight as a kid. It was a warm, almost moldy/woody smell and it was comforting. There are names for those smells and it turns out there’s a reason for those good feelings.

Bear in mind as you read this that I was a microbiology lab tech before I was a doctor and a writer, so germs are one of my “things”. I even used to identify some of them by smell. So this idea intrigues me, but in consideration of others I’ll try not to nerd out TOO much here.

The first nerdy scientific word I have for you here is Petrichor. Petrichor is the smell of the first rain after a period of warm, dry weather.

The molecules that produce that smell are called geosmin and 2-MIB. These molecules are not actually produced by dirt, but are most commonly produced by a genus of bacteria called Streptomyces, which acts a bit like a fungus.Geosmin’s smell is detectable by humans at 5 parts per trillion and it can also make drinking water smell bad to some people.

Apparently beets also make geosmin, which explains why beets always taste like dirt to me. Although I love the smell of dirt, I don’t want to actually eat it. So there, I have a scientific explanation for why I hate beets. You can use that excuse too if you want – you’re welcome.

So now that you know about THAT bit of trivia, there is another bit of ongoing research into a different species of soil bacteria called Mycobacteria vaccae. Mouse experiments have shown this organism to actually induce good feelings if ingested or inoculated. Yes, you read correctly – this could be an actual antidepressant soil germ that holds promise for treating PTSD as well as other forms of depression and anxiety.

To understand why this is so exciting it’s important to understand a couple of concepts that have been going around the immunology world for a few decades. The first is known as the “Hygiene Hypothesis”.

The Hygiene Hypothesis discusses the fact that babies and toddlers exposed early to pets, farm animal, and soil tend on average to have fewer allergies, asthma, and autoimmune issues. The thought is that the early immune system tunes itself to common microbial antigens as it is developing and tends to ignore those antigens rather that react to them with later exposure. Thus, being raised in a “too clean” world may be detrimental to the programming of the immune system. I sometimes liken it to a high energy dog breed. If you don’t give the immune system something to do early on, it can soon start chewing on the furniture out of boredom. It’s a poor analogy, but you get the idea. An immune system that chews on the furniture produces things like allergies and autoimmune diseases. A bored immune system is a thing to be avoided.

Then there is the “Old Friends Hypothesis”. This thought arose out of some research which showed a much lower incidence of inflammatory bowel diseases such as Crohn’s and Ulcerative Colitis in areas of the world where intestinal parasites are still common. Mouse experiments indicated that certain parasitic worms helped to balance the gut bacteria in mice genetically predisposed to a Crohn’s-like condition, producing positive effects. Research continues to grow in this area and it looks like the gut isn’t the only organ system affected in this manner by environmental organisms.

The human gut, immune system, and serotonin system are quite closely interconnected (even though many people think about serotonin as only related to mood and brain function). IF these systems co-evolved with the presence of the bacteria and parasites that shared space with early humans, then maybe in a too clean world without these “old friends”, some of our systems don’t function optimally. Maybe in addition to having bowel problems and immune problems we have depression and anxiety issues as well.

This may hopefully lead to some treatment options for serious diseases. We have for example over the past couple decades discovered the value of certain gut bacteria and have added “some” probiotics back into our digestive routines, but there are many more microbial “friends” yet to be discovered. Mycobacterium vacccae may be one of these “old friends” that our bodies (and brains) are dearly missing.

This is certainly intriguing. If it works for mice, will it work for people? As we spend even more time in our ever more sterile worlds (which all the pandemic sanitizing didn’t help) we are all as a species seeing the effects of our removal from the natural world and its inhabitants – especially the microscopic kind. Could these and other as-yet-unknown microbes hold the key to better physical and mental health for us all? More research needs to be done, but the prospect is exciting. (Yes, remember I’m a germ geek.)

Obviously it’s going to be a while before “old friends” therapy makes it into mainstream human treatment programs, and no one is advocating we start eating a cup of garden dirt for breakfast every morning to help our moods and belly issues. But we can all work on our exposure to the natural world. We can get outside more, get into the woods, sit in a turkey blind, dig in the dirt, and plant a garden (then eat the veggies that grew in that dirt that weren’t commercially “sanitized” first).

While we wait for more research and treatments into various physical and emotional ailments, we can all get back out into the natural world, get our own dirt therapy, and reacquaint ourselves and our bodies with the earth we all came from. I know that sounds pretty hippy-dippy, but turns out – it’s science!