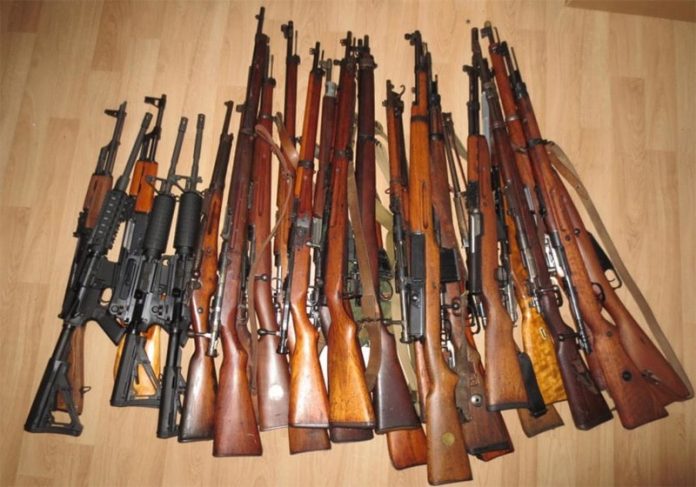 There are occasionally some diamonds in the rough when it comes to the used or surplus firearms market. Often times people will turn their nose up at surplus guns because they often times have a lot of holster wear and might have some marred stocks or grips. In order to maximize your chances of finding an affordable surplus pistol or rifle you might have to look past the obvious surface issues and see the guns potential. In the early to middle 1990’s the surplus firearms market was booming and it was the golden days of gun collection. I remember Chinese SKS rifles going for $109 and Lee- Enfield SMLE rifles selling all day long for $79.99, those days unfortunately are long gone and never returning.

In 2016 we have one advantage that we didn’t have in those old days, blazing fast internet connections and sites that cater to gun owners. Gun broker, Guns America, Cal Guns, AR15.com and a laundry list of other sites all offer sales forums and auctions that we hadn’t even dreamed of 20 years ago. I used these very resources in compiling this list of the Top 5 Surplus guns. The list offers a little something for everyone and especially something for the gun owner who always is looking for a good deal.

At the end of the article we have provided you a list of some of the stores and auction sites that I routinely use while searching for these diamonds in the rough. Keep in mind all local and federal regulations apply if you purchase a firearm on the internet and will need to be transferred to you via a licensed federal firearms dealer in your area. This is federal law and not negotiable, if you have any questions about rules and regulations you local FFL is the best place to ask.

Without any further delay here is our list we have dubbed : Diamonds in the Rough, Top 5 Surplus Firearms You Should  Own and Why. It is listed In no particular order.

When Police Departments upgrade their pistols or switch contracts their used service pistols usually fall into the hands of FFL dealers and can be snagged up at a great price. With a few minutes of looking on sites like www.wikiarms.com you can find Glock 22’s and Sig Sauer P226’s for under $300.00, thats less than half the price of a new one. They will also usually come with more than one high capacity magazine. A word of caution, these pistols will most likely have significant holster wear abut will function very well. If I was buying one the first thing I would do for peace of mind is replace the springs.

I speak from experience here when I tell you that I have purchased an Israeli Defense Force trade in Browning Hi Power MkII, and it was well worn and had a lot of mileage put on it but with a deep clean and a cylinder & slide trigger and sear kit it was good as new. The “average” listed Browning Hi Powers can be snagged up for as little as $349 is you look int the right places. These pistols feature a steel frame and slide and 13 round magazines standard. It was built for war and it shows it, the BHP is not a light pistol and most of them feature smallish sights similar to military issue M1911 pistols. If you are looking for a pistol with a great service history at a great price consider the Browning Hi Power. Gun broker.com is your best bet for these at an affordable price.

If you don’t listen to a single thing I have to say, at least listen to this suggestion. The SKS type 59/66 was made in the former country of Yugoslavia and can still be found in unissued condition for around $399. Now some people may scoff at that cost for a SKS but its not 1993, any SKS for under $400 is a good deal and these are brand new unissued. They also shoot the same round as the venerable AK47 (7.62×39). They are classic old school weapons made of steel and wood, featuring a 10 round internal magazine. Many will feature a blade style bayonet and a ribbed grenade launcher on the muzzle. In 2016 these are purely aesthetic in nature. Still any rifle with a bayonet is just a fun gun in my book. Also of note the 7.62x39mm can be used to take North American white tail deer fairly easily at closer ranges.

The only bolt action rifle to make the list, the Mosin Nagant served the Russian Empire then the Soviet Union from 1891 up until recent times in several variations. It shoots the 7.62x54R cartridge that is ballistically similar to the .308 Winchester round. The Mosin Nagant is a throw back to a generation of heavy rifles that packed a punch and can reach out long distances with ease. Part of the fun in collecting or purchasing Mosin Nagant variants is figuring out what country your rifle is from. The 91/30 variant of the Mosin Nagant was the standard infantry rifle for the USSR fromm 1930-1945 and was responsible for the deaths of many a German in World War II. Remember this rifle was made so that it could be used and fielded by peasants, it’s one of the simplest rifles Ive ever owned. Accuracy on the Mosin’s is as good as any bolt action rifle I have ever owned.

The Polish Radom P64 is a handy pocket pistol chambered in the 9x18mm Makarov cartridge. The P64 is a proven design and served the armies of the Warsaw Pact nations from 1965 until after the fall of communism. At an average retail of $229 it offers the buyer several features that make it an excellent low cost conceal carry pistol. It features a double action direct blowback system, a loaded chamber indicator and is fed from a six round single stack magazine.

I hope you enjoyed out quick Top 5 list, if there is something that you think should be on the list, drop us a line in the comments section and tell us why. If you disagree with any of our choices, let us know why you think we chose poorly. Below is a list of sites that can be helpful in your surplus gun searches.