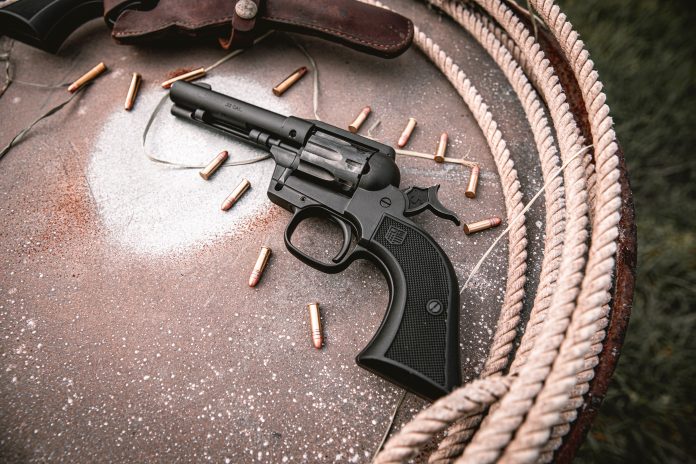 The Diamondback Firearms Sidekick is a solid mix of old school and modern engineering. The Sidekick is a close clone of the High Standard Double Nine. The Double Nine is long out of manufacture.

The revolver features a 4.5 inch barrel. The Sidekick is finished in a nice dark Cerakote. The revolver features a front post sight and a simple groove in the top strap. These sights are as good as any of the type and are properly regulated for 40 grain pills at 10 to 15 yards using the six o’clock hold. If you hold dead on at 50 yards you are pretty close to big rocks with this revolver.

The Sidekick uses a transfer bar ignition system. There is no danger of an accidental discharge if the hammer is struck. The revolver features composite grips with a good balance of adhesion and abrasion. A modern feature is that the Sidekick is offered with interchangeable cylinders, marked .22 LR and .22 Magnum. Depress a plunger in the frame and the cylinder crane is released. Remove the cylinder, depress the plunger again and snap the other cylinder in place. I was surprised at the easy fit. The revolver doesn’t lose headspace and operates properly with a minimal barrel/cylinder gap. The ejector rod doubles as a cylinder release. Simply pull the ejector rod forward to release the cylinder. A single lock up point is fine for a rimfire revolver. The heft, balance and handling of the revolver are excellent.

Firing the revolver was a joy. Recoil is non existent.

The best means of achieving double action accuracy with this type of trigger is to aim, press the trigger until the hammer is back and almost breaking against the sear, then break the shot. Single action fire is no problem at all, this is an excellent trigger. I fired a good many rounds the Sidekick. The majority were the last of an old stash of CCI Blazer .22 Long Rifle. I suspect somewhere about a decade old or more. None failed to fire and accuracy was good.

Settling down to fire from a solid bench rest I placed the Sidekick in my MTM Caseguard K Zone shooting rest. I took my time and fired single action with every shot. Switching the cylinder to the .22 Magnum chambered cylinder I added a full load of CCI Mini Mags to this test. Firing at 15 yards the Sidekick will place five rounds into just less than two inches. This is an accurate revolver, well suited to general practice and informal target shooting. It is also a good choice for the great American sport of small game hunting. With the Magnum cylinder in place the Sidekick has a greater measure of authority for pests.

I don’t recommend or use a rimfire for personal defense but a reliable easy to use well revolver with nine rounds of .22 Magnum could be a lifesaver. The Diamondback Firearms Sidekick is a nice handling revolver well worth its modest price.

[Editor’s Note: check out the new Federal ammunition for defensive .22]