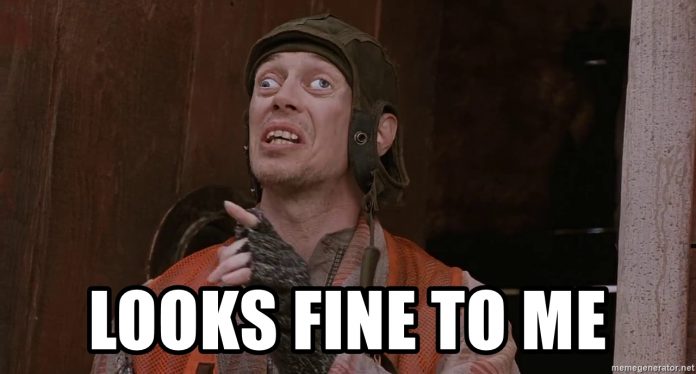 The Boston Globe ran the following letter from the Falmouth Gun Safety Coalition in response to the Virginia beach shooting. The “Derp” is strong… we will see if the analysis stands up. If you can guess the answer by the article title, you win one internet.

The recent shooting in Virginia Beach, Va., shows that the most severe gun-related problem facing our society is the proliferation of guns containing a semiautomatic mechanism.

Huh? That is a quite the new take on a firearm action style that is more than a century old. “Containing a semi-automatic mechanism” sounds like it’s some form of evil RAM chip you add to a computer to access the dark web. Not.. you know.. a series of springs so that when the action opens it will close again on a new round of ammunition. Also don’t tell the FGSC double action revolvers and rifles exist, throws this whole vibe they have going completely off.

The gun used in this incident was a .45-caliber handgun, not an “assault rifle.”

Thank you for recognizing that… I suppose. Also why is assault rifle in quotation?

The connection between the handgun used and an assault rifle is the incorporation of a semiautomatic mechanism in both.

Aaand there it is. There’s the Derp.

Let’s parlance assault rifle properly first. Once again, for the folks in the back: an assault rifle is a select fire capable (automatic or fires in bursts AND semi-automatic) intermediate caliber rifle most often fed from a detachable box magazine. If it doesn’t have the colloquially called “giggle switch” it is not an assault rifle.

Now every semi-auto is an “assault weapon.” Not assault rifle, which has a definitive set of features, but an assault weapon. An assault weapon can have any of a number of century old features as long as the sound and/or look scary enough to be put on a list.

Now nobody should remind FGSC of the Washington Navy Yard, having a pump shotgun used in an attack with a number killed of 12. Also a government employee attacking their place of work… Such a detail throws this whole angle into chaos.

This mechanism automatically ejects spent cartridges and loads new ones.

And has existed for mass public consumption for over a century. Semi-automatics are not new.

Both styles of weapons accept high-capacity magazines and can handle large-caliber ammunition.

These are nonsense words. Gun controller definition of “high capacity” seems to be a dwindling number. 30, 20, 15, 10, 7… Any capacity when used against you isn’t going to be a good situation. Assigning an arbitrary number isn’t going to help your unarmed gun banned work spaces shoot back, you’re waiting for armed help… exactly like you wanted to.

While we focus on AR-15 style weapons, literally tens of millions of semiautomatic handguns are sold to the general public.

Yep. The single most popular firearm category for years has been handgun, and the reason has been protection. Okay, Derp on.

These are the weapons that function exactly the same as the Virginia Beach gun.

And every department issued or approved service handgun… and the vast majority of handguns used in self defense as the revolver declines in popularity… and the handguns of the the U.S. Military since 1912…

Our organization, the Falmouth Gun Safety Coalition, is working to achieve legislation that will ban the semiautomatic mechanism in any gun sold or owned in Massachusetts.

Sooo most guns. But don’t worry, we promise it isn’t an infringement. It isn’t, we said so. -FGSC, again probably.

These are weapons that were designed for military and law enforcement purposes only and not for the general public.

Not at all accurate. Most AR-15’s were designed from the ground up as civilian products and many are even of higher quality and newer tech than their military counterparts.

Revolvers, lever-action, pump-action, and bolt-action guns cover the full spectrum of civilian needs, whether they are hunting, personal protection, or home protection.

You know nothing, Jon Snow. Who are you to arbitrate a need? I missed the line about “unless civilians don’t need it according to you” in the 2nd Amendment. I will check again but it’s only 27 words. And as for protection, when was the last time you have been remotely close to a fight?

The semiautomatic mechanism for guns has no place in civilian hands.

It has every place in civilian hands, your imbecilic level of ignorance to speak on this topic seems very Dunning-Kruger. I should take your expertise on firearms as seriously as you should take mine on neurosurgery.