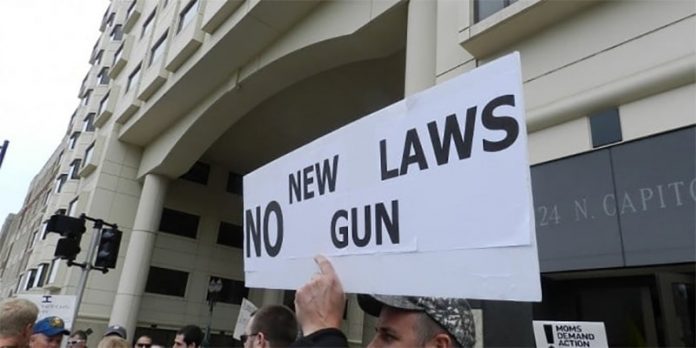 A few days ago, a bill to ban so called “Assault Weapons” in Michigan was introduced by State Rep. Robert Wittenberg (D-Oak Park). The bill number is HB 5996 and I suggest you read through it if you have the time.

It’s probably no surprise to you, but the bill does nothing to promote safety. In fact, it actually bans things that promote safe gun handling.

I don’t like scare tactics, so I’ll cut to the chase – the bill is DOA.

HB 5996, as well as other bills that were introduced with it, are nothing more than a political stunt designed to exploit horrific tragedies for Rep. Wittenberg’s personal political gain. It is beyond shameful. We are 22 months into a 24 month legislative session. This past Wednesday was the last day the House is to be in session before the elections. It’s not hard to put the pieces together.

If you are relieved to know that the bill is already dead, also know that it is only because of the tremendous amount of work your local, state, and national gun groups have done. We have won this round right out of the gate, but we cannot become complacent. It is important that you join, donate to, and support, any and all groups that you feel have earned your support. They need all of the support they can get.

It is also important that you still contact your legislators and let them know how you feel about legislation like this. Even if your representative is one of the biggest pro-gun legislators in Lansing, they still need to hear that they are doing the right thing and you support them for it.

So what’s actually in the bill? Well, as usual the gun banners have no idea what they are doing, or do they? We know that what they really want to do is ban anything with a trigger. Intentionally or not, this bill would put them a good distance down that path.

We hear a lot about “common-sense gun safety” from the anti-rights crowd, but now we can see what that actually means to them. According to HB 5996, it means banning common things that help people handle guns safely. Things like:

Telescoping stocks that allow you to fit the gun to you so that you can handle it safely, or share one firearm with your family. Does this mean they want you to buy more guns?

Barrel shrouds which are defined as a “covering […] that substantially or completely encircles the barrel, of a firearm and that allows the bearer of the firearm to hold the barrel […] without burning that hand.” How dare you not want to burn your hand! Off to jail with you!

Muzzle brakes defined as something attached to the muzzle to “reduce recoil”. To hell with your shoulder!

Muzzle compensators defined as something attached to the muzzle that “utilizes escaping gas to control muzzle movement”. Well, I guess they can never again whine about being worried about stray bullets.

At last but not least, the bill bans even possessing something called a “conversion kit“, which is basically defined as any part, or combination of parts, that can turn a firearm into an “assault weapon”. This would make possessing a small plastic foregrip, on its own, a 4 year felony.

It couldn’t be any more obvious that this isn’t about safety.