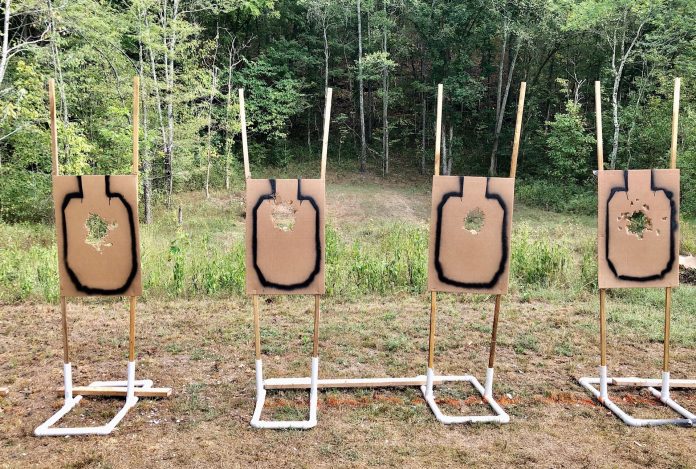 I recently had the pleasure of taking a Defensive Shotgun class.

I wasn’t originally so excited about it – I was a little apprehensive. But I had recently rebuilt a pawnshop shotgun into a home defense gun and I needed to learn how to run it for defensive purposes (as opposed to competition or hunting purposes). The class was presented by Tom Givens of Rangemaster fame so I knew I’d get a good education – it was my own performance I was worried about, since I have recently struggled with hand/wrist arthritis issues.

I need not have feared, because this turns out to have been one of the BEST classes I have ever taken!

Though Rangemaster classes are given all over the country, this particular one was an almost ten-hour drive from home – near Nashville, TN. The classroom building was back a bunch of country roads, so after my arrival at the hotel I drove the route ahead of time to be sure I knew where I was going. (No control-freakness on my part or anything.)

When I arrived the next morning I discovered that though there was a female assistant instructor, I was the only female out of fifteen students taking the class. I’ve gotten rather used to that in my shooting history, so that in itself didn’t bother me. But then the guy sitting next to me felt it necessary to inform me that his wife had left in tears when she took the class with him last time. (Oh yay – thanks sharing THAT, dude.)

Maybe he was just trying to rattle me for some reason, because I had NO such experience. MY experience was informative, skill-building, and even – dare I use the word – empowering.

The first half of the class (before lunch) included safety essentials, history of the shotgun, history of shell and load development, suggestions for accessory set-up, gimmicks to avoid, etc. All of it was valuable information, most of which I had not ever heard before.

I liked that this class was focused on the context of home/property defense – from the end of your driveway, through your house, and out to your back fence. Those distances are the ones we needed to pattern for and select ammo and accessories for. I have never pretended to be “Tammy Tactical”, and just because the SWAT team has some gizmo or other doesn’t mean that “I” necessarily need that for my context – including stuff like weapons lights and slings. That was really good to know. It’s easy to get caught up in thinking you need “cool guy” accessories even when you aren’t a cool guy. All that effort is better spent in actual practice with your actual gun.

I found the classroom portion to be very educational. I received a good bit of background context for why the shotgun is a good choice for home defense. I got some solid advice for how to keep my butt cuff from creeping forward, and I’m now also going to be investing in Velcro panels for a side saddle. I even received backhand confirmation of my stock choice, as Tom’s guns are also outfitted with the Magpul SGA stock, AND are 12-inch length of pull to boot.

The lecture portion dispelled a good bit of BS about ammo types too – including the ever present myth about bird shot for defense.

Tom pointed out that most game birds are not killed by the shot, they are crippled in the air (merely rendered unable to fly) and then killed by the sudden stop on the ground … or by your dog … or when you wring their necks.

Birdshot merely dented this target clip, and it wouldn’t have penetrated a heavy leather jacket either. Bird shot WILL still penetrate drywall though so the reasons some people give for using it do not hold up under scrutiny.

In addition to all that, CHEAP birdshot will jam your gun. One of my classmates had that exact thing happen. It can be worth a few extra bucks to buy decent practice ammo.

While on the subject of loads, Tom also reinforced the importance of patterning – because you are responsible for every single one of those 8 or 9 projectiles. You can’t just shrug off a flyer – because it could kill a bystander. He then provided a real world example of that happening – 8 pellets in the bad guy, but one off-track pellet sheared off the aorta of a good guy.

After the lunch break we proceeded to the private range where we were going to do our live fire.

Once at the range we did a good bit of dry fire first to reinforce the muscle movement, before moving on to “Load one, shoot one”, “Load two, shoot two”, etc. Then we worked on replacing what we shot – “Shoot two, reload two”, etc such that you are always topping off the gun.

All reloads were done with the support hand, so that the gun was under control of the shooting hand at all times. This is a definite “fighting gun” difference from what I have seen in competition. Fortunately, I was already a support hand reloader so I didn’t have to relearn that part, but grabbing right-hand mounted shells from the butt cuff (rather than a vest pocket or competition rig) is a new set of motor skills that I need to work on. By the end of those drills my shoulders were telling me that I needed to do more upper body weight training.

It was a work-out, but it was never arduous. I complained a little in good fun, but I was fine. We were given adequate breaks for water in the 95 degree heat and to shake out our hands and arms. My still-recovering wrists and hands performed much better than anticipated.

We spent the largest amount of time on drills for loading from the butt cuff or side saddle – not because many shotgun fights require reloads, as Tom said – but so that we could pick up an unloaded gun and quickly make it ready to shoot if we needed to. That is something that I need to continue to work on with dummy rounds at home. Those are perishable skills.

After we all had the loading and shooting drills under control, we were then challenged with something called the Casino Drill. This drill was performed individually, up in front of everyone, sooooo no pressure or anything. But that was the idea – adding pressure. If somebody is kicking down your front door, you ARE going to be under pressure. Defensive gun skills don’t do a durn bit of good if you can’t perform them when you are stressed.

My memory is foggy, but I think the fastest guy was in the low 20’s with a semi-auto. I performed the drill in about 28 seconds (under par time) with my pump gun, and was very happy with that for a first effort. Reloads from a butt cuff are painfully slow. But I completed the drill, under pressure, in front of all those men and a notable instructor, with a gun I rebuilt myself, and under the allotted time. I couldn’t have asked for anything better. I was elated!

After we all got through the casino drill with birdshot (because it’s cheap for practice, not because it’s recommended as defensive ammo), we moved on to patterning our buckshot loads. As Tom pointed out, no two barrels – even off the same factory run – will pattern the same. Thus we needed to see how our own gun/ammo combo worked.

I brought Fiocchi low recoil double-aught buck because I was worried that the pump gun was going to beat me up. (I have previously been spoiled by the minimal recoil of my semi-auto Benellis). But it turns out that though the recoil was fine, at ten yards the pattern with that load started to open up a good bit out of my gun. So it would not be a good choice for actual defensive use – at least at any distance with this particular gun.

Tom recommends Federal Flite Control 8 pellet double-aught, and the targets of the guys who were using that load showed why. At ten yards with three rounds some targets looked like a slug target, and with the rest you could still cover the pattern with the palm of your hand.

A couple guys offered me some of that load to try, so now I need to order some of my own.

I would be remiss if I failed to mention the “Rolling Thunder” drill. This was something we ran several times with birdshot and a final time with buckshot. We were divided into two teams for a bit of competition. We were to consecutively load and fire in the sequence of “load one, shoot one” – up to “load four, shoot four”. You couldn’t start shooting until the guy to your left had finished his last shot, and you had until that time rolled around again to reload your gun for the next string. It was supposed to sound like continuous gunfire until the end. Again, I’m a little fuzzy, but I “think” our team finished before the other team every time. If so, that means that this old gal with her rebuilt pump gun did NOT hold everyone else up. I have to take my small points of pride where I can find them, so there ya go. I was proud of myself.

One of the biggest take-aways I got from this class is that despite popular misconception, you still need to AIM a defensive shotgun. During live fire I was reminded at least once to “Keep that bead down, Doc”. Unlike bird or clay shooting, you want a small pattern and you want it to stay within the confines of your target – not rocket off into lawsuit-land. Remember that part about being accountable for every pellet? Proper aim keeps your hits ON target and OFF bystanders.

Another big take-away is the importance of on-board ammo storage. Nobody sleeps in a competition belt and shell carriers. I need to make some modifications to my butt cuff and buy a Velcro sidesaddle – and then PRACTICE with them.

Thanks to this class I have newfound confidence in this pump gun and my ability to run it. I heartily recommend this defensive shotgun class to anyone who wants a solid grounding in shotgun as a home defense tool. Not only that – it was FUN, too.

Tom later noted online that ours was a “truly outstanding” class, and “ ‘that guy’ was conspicuously absent”.

Nobody ever wants to be “that guy”, and despite my initial trepidation I am pleased to report that I wasn’t him either.

Many thanks to Tom Givens, and his able assistant instructors Tiffany Johnson and Aqil Qadir. It was a great experience and I will definitely be back for another class!